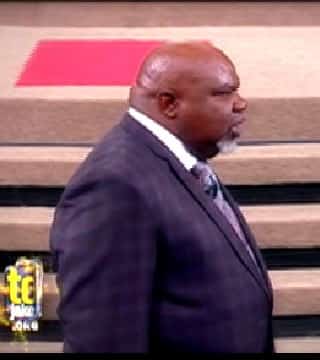 Greetings in the name of our Lord and Savior Jesus Christ. You and I are blessed to be alive and be here and God's given us life because he has a mission for us to go on and accomplish in his name. In order to understand what he's commissioned us to do, we have to hear from God himself as we go to the word of God, may his word dwell in your heart richly by faith and bring forth fruit in every endeavor. Let's go to the word. Let's check it out.

What scares me about this generation now is we're going into a dumbing down of ideas. We don't feed our minds anything. We don't invigorate ourselves anymore. Every genera, television has gone down to just reality TV. We sit up for hours to watch people like their food. So the people who study to do the arts and to do dance and to do drama are searching for a job while they're sitting in front of the camera. People in our generation are famous for nothing, they don't produce anything, they don't do anything. They're just famous. Famous because you're cute. So it is the dumbing down of ideas. And when ideas stop, economy stops, creativity stops, buildings, corporations all stop because everything happens that's important to you between this ear and this ear.

So now is the season for you to move. Distractions. Confusions. Turmoil out of the way to find a peaceful place where you can meditate and think. What am I going to do at this season in my life? What am I going to do with this age and stage? What can I do with these circumstances in my life? What would you do? One thought. If God whispers in your ear once every ten years it would change the last half of your life. He doesn't have to say something every day. It will take you ten years to work out what he said one time in your life. You are one thought away. God thought, I'll make me a world. He spoke. I want to pray over the thoughts you think. If you think wrong, you go wrong. If you think down, you go down. If you think you can't get up, you can't get up. If you think you can't be free, you can't be free. If you think you can't learn anymore, you'll never be able to learn.

Your thoughts are either dragging you down or taking you up. It is not what she thinks about me that makes any different. I think she thinks good about me but it doesn't matter. If she didn't think good about me, it wouldn't impede my ability to do what I do, because I'm not moving out of her thoughts. I'm moving... Do you understand the words that are coming out of my mouth? So why would I waste my energy trying to change how you think about me when your thoughts have no direct bearing? You're working on the wrong stuff. Stop trying to change people's minds. Let them think whatever they want to think. You don't have time to be a steward over somebody else's thoughts. Get your head together. Are you following what I'm saying? I want to pray over the thoughts you think. The plans you have. Thoughts become reality.

I'm sorry, I didn't mean to go on and on about that. I have this stuff in me and I have no place to release it to because sometimes church people are so spiritual they make me nauseous, because they expect God to do everything. What dress should I wear, Lord? What job should I take, Lord? Do you want me to have a brick house? He don't care. He doesn't care! God doesn't care! That's your choice. That's your...

God, I need somebody who can catch this. One thought. One thought transform the alcohol to alcoholism. One thought. One thought delivers you from hopping around in the failures of your past and stand up like a man and say I'll be defined by what's in front of me and not what is behind me. What's behind me won't control me. I'll break the chain on the yesterday so I can fly into tomorrow. My latter day will be greater than my former day. You'll not beat me, because I think myself to be strong enough to fight you back off of me. When somebody messes with your mind they have messed with your most precious resource. When they mess up your head they messed up something serious. Out of your thoughts comes your family, your companies, your self perception, your creativity. Every now and then, you need to come to church so you can get your head together. Glory to God.
Do you have the courage to think something beyond where you are? I may not have to preach my sermon this morning. This may be my sermon. Do you have the courage? God says to Abraham, look out from where you are. He says, old man, do you have the courage to think beyond the parameters of your present location? He said, look out! What do you see? I see the stars of heaven. Look out! What do you see? The sands of the earth. What you see is what you'll be. So shall thy seed be. Your children will be what you see. If you see nothing, they will be nothing. If you see something, they will... Glory to God.

Isn't it ironic that God use what the Bible calls the foolishness of preaching. What is preaching? The interjection of truth into your mind. It is word coming into your head. This is a God who created the earth, the cosmos, the planet, he created everything and he chose word to change you. Because word produces thought. Even evil words are powerful.

If somebody stands over you and says you're a fool, you're a failure. You'll be a tramp just like your mama. Whatever they say to you, those words have life. If negative words have power to bring you down, positive words have life to pull you up. Somebody told me something they heard somebody say. I said, I don't care. I don't care. If he was me and I was him, he wouldn't care what I said. Wouldn't Oprah be stupid to care what I thought? My thoughts didn't make her and my thoughts didn't break her. When it comes out of your head it's the designer's original and you don't have to pay anybody. Ya'll don't hear what I'm saying. Anyway, let me get this.

When president Bush came into office as soon as he got into office he could scarcely unpack when he ran into 9-11 and World Trade Center collapsed and all this drama and new term emerged from attack. Generally terms evolve out of attack. Creativity evolves out of attack. Mother of invention. A new term came up that we had not heard before War on Terrorism. Remember that? Everybody was talking about that? He said it was a new kind of war. In reality it was similar to the Reagan administration that had War on Drugs. Remember that? Then there was the term War on Crime.

All three terms are new terms for us because we're used to fighting for turf, for territory. World War One, World War II. American Revolutionary War, Spanish War, everything fighting for something we could see. But the real fight is never over what you can see. The real fight is always over what you cannot see. The hardest fight you'll have in your life is to fight for things that are intangible. They're untouchable. Because, because you must understand conception AL fights are the biggest fights because concepts are the creative realm. It is easier to fight for stuff than it is to fight for an idea. Because the idea, the spirit world is the parent world from which everything physical emanates. Can you follow me with that?

Through faith we understand that the worlds were framed by the word of God so the things that do appear are not made from things that do appear. So everything that's tangible starts out at intangibles. Okay I wandered in my mind then isn't it weird the old church had physical fights and fought for stuff and martyred and killed and the early apostles gave their life. They were sawed asunder and crucified upside down and went through all kinds of horrible stuff and as we get close to the end of age we don't see as much of that as we did before.

24/7 around the clock we're being shot in our morality. We're being skinned in our integrity. The enemy is using your past to stir up all kinds of stuff to choke you to death with your childhood needs and your brokenness and your desperately. The war has slipped underground. Who would have thought we would ever have to fight stuff like powder and be at the post office talk about shut everything down over powder. We used to fight nitro-glycerin and machine guns and all kinds of things like that. It's moved naturally and spiritually into another realm. You're being fought in ways you can't describe.

You remember when he was talking about cell groups and there was cells all over the country and they could be living next door to you and activated at certain times. The enemy has things down in you he knows are vulnerable places in your life and cell group attacks in your spirit. Every time you get ready to step up, go forward or do something important he'll activate one of the cells that have been quiet in your life. You're quiet. You didn't know it would come up again.

Here you are, 40 years old fighting something that happened when you were ten. Fighting something you didn't even think was an issue anymore. Every time you get ready to move, he activates a cell to attack you in ways you have never predicted would happen to you. Marriages 30 years into marriage now you talk about divorce. Ya'll have been married 40 years and now you're sick of each other. You don't know when you got sick of each other. You looked at each other one day and said I don't know if I can live with you or not. That's not your thought. That's a cell group activated to terminate what you have. The enemy comes to steel, kill and destroy. But I've come that you might have life and have it more abundantly. Somebody say amen.