TD Jakes - Playing Catch Up With Your Dream 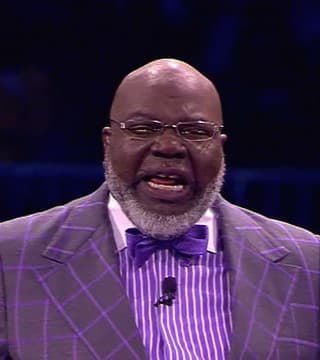 Nobody's gonna find you sitting on that couch with rollers in your hair, eatin' milk duds, and watching Love of Life. You think Prince Charming is going to come in there and find you walkin' around in them mumus and that house coat, that raggedy house coat that you've got on? And them turned-over house shoes that you wear around the house, and you're praying for the Lord to send Boaz? Why in the world is Boaz gonna come and get you out the bed with your sleepy self? You got to get rid of that fairy tale of faith and become deliberate about what God is going to do it your life, high five your sister and say, "I'm a deliberate woman. I live on purpose".

I got the instinct, I got the unction, I want something that people around me don't even want, I never fit in with my neighborhood, I didn't fit in with my click or my club, I've got some instincts that are beyond my circumstance, so I got to get over my circumstance and start walking in alignment. So God says to Habakkuk, the prophet who was waiting on an answer from God 'cause he doesn't understand where he is, he doesn't understand what season he's in, and he doesn't understand what's goin' on in his life. And God gives him simple instructions. He said, "Write the vision". Okay? Not the problem, not the obstacle, not the need, not the lack. He said, "Don't write about what you like, write the vision". Write it. Write it.

Oh, my God, tell your sister, let your feet do the talking. Stop explaining, stop arguing, stop fighting back on Facebook, stop arguing on Twitter, stop complaining with your so-called friends, tell 'em to watch my feet. You see, the world has changed. And as the world changes, both positively and negatively, God gives you opportunities. Opportunities are created from adversity. You wouldn't need a washing machine if you didn't have dirty clothes. Opportunities are created from adversities. So, if you have adversities, your adversities are opportunities. Whether they become opportunities or not is how you look at them. If you see it as a problem, it's a problem. But if you see it as an opportunity, it's an opportunity.

Have you not recognized opportunities because they were dressed in adversity? If you look at the clothes of opportunity, opportunity always puts on an adversity suit. Not too long ago, there was a tornado come through, and the waves from the ocean were comin' up on shore, and houses were up under water, and the streets were covered with water, and everybody was getting out of town. It was so dramatic that they turned the two-way streets into one-way streets, all exiting the city, everybody tryin' to get out of town as quickly as possible. Didn't know how high the waves were going to come, people could be killed or destroyed, lose their property. They were all headed out of town, back-to-back, the highway looked like a parking lot with cars stuck on it trying to get out.

And in the middle of all of that, here comes a bunch of young boys running in the opposite direction toward the storm, carrying surfboards. Because what everybody else saw as an adversity, you'll get it when you get back home, they saw it as an opportunity. A wave is an adversity if you're not prepared for it, but if you got a surfboard, this is the time of your life. I've never seen. And what I'm trying to tell you is that the blessing of the Lord comes in waves. It comes in waves. And if you stop runnin' from the wave and just ride the wave, the blessing of the Lord would overtake you if you're ready for it. How many people say, "I'm ready for it"?

The world is changing. It's not just that you're new, you're in a new world with new opportunities, new problems, decadence, and situations and circumstances that are beyond anything your grandmother would imagine. Imagine if your grandmother woke up in this world today, and she was running around looking for a telephone booth. I'm going to call them, you got any change? Drive me down to the phone booth so I can call somebody. How far would you have to drive in Atlanta to find a phone booth? You're going to need a lot of gas. You can have the coin, you can have the need, but if you don't understand the world you're in, you are dysfunctional. You're not just dysfunctional because of your childhood, you are dysfunctional when you are prepared for that which is antiquated. So God says run forward, not backwards.

Can I go deeper? Oh, this is good, I got the right folks in here. I got the right folks in here. Somebody say, "I have a dream". You need to run in the direction of your dream, and away from the direction of your disease. Disease. I'm not sick. Disease simply means dis-ease. Dis-ease. Dis-ease. Somebody bring me a chair, can you bring me a chair? I'm a little hooked up, if there's a single chair, bring me the chair. Dis-ease. Write this down. Dis-ease. Thank you, son, for bringing this chair up here. Thank you. Now, I'm gonna sit down. So I can be comfortable in what I'm doing. So I can be at ease. You got me? Do you not know that God can give you blessings that make you uncomfortable? That you can be not at ease with being loved? Not at ease with being successful? And if you have a dis-ease, that dysfunction will make you self-sabotage your opportunities. And you might not have high blood pressure, you might not have kidney failure, but you've got a dis-ease, 'cause you are uncomfortable with your own dream.

So pray all you want to, but if you are at dis-ease with your dream, you won't run after it. You'll shout about it, but you won't run after it. You think you're a procrastinator, you're not a procrastinator, you got dis-ease with your dream. You are dreaming somethin' that you won't relax in. You won't walk in it. You're still walkin' in who you were rather than who you are. You need to go in a phone booth, make you a call, go in there as Clark Kent, but come out as Superman. In fact, I declare woman thou art loosed to be a phone booth. This is a place that you're gonna come in here one way and you're gonna walk out a completely different way, because you came in here to be loosed from what you came from, but I came in here to call you into what you're going to. You gotta catch up with your dream.

You don't hear anybody preaching about her. Everybody's preaching about Ruth. Nobody's preaching about Orpah. Orpah is the girl who could not escape the gravitational pull of where she came from, because she found safety in dysfunction, and she had dis-ease with her dream. And I just wanna know, are you Orpah or are you Ruth? Let me ask them, are you Orpah, or are you Ruth? Orpah only feels safe with poor folks, broke folks, hateful folks, gossipin' folk, lying folk, cheating and whoremongering folks. Orpah doesn't feel comfortable in a big room. Orpah wants to be a big girl in a small room. Orpah sabotages all of her opportunities, because she has not been mentored for the opportunity that God has in front of her.

Orpah is afraid that she won't speak the language, and she doesn't have the clothes, and she doesn't know how to fit in, so she goes back into the very thing that she should've got away from becoming familiar. Orpah is the girl who stays with the dead. Orpah's husband died, her father-in-law died, her brother-in-law died, and Ruth said, "I'm going to let the dead bury the dead", but Orpah stayed with the dead. Are you staying with dead things because they're safe, or are you deliberately living beyond the brink? Because if you're gonna be Ruth, you're gonna be scared. But it's okay to be scared. You're gonna go into a new world, you're gonna go into new rules, and new cultures, and new opportunities. You're gonna sit in boardrooms and places that you've never sat before. You're gonna negotiate stuff that you've never done before. You're going to speak the Word with power and clarity beyond the brink.