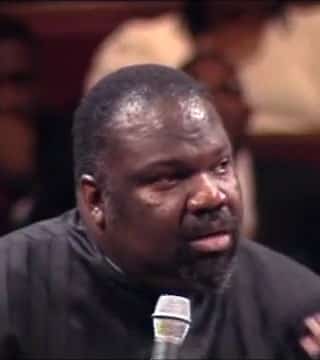 We need to get back to the word of God, feeding ourselves and let the pastor come along and confirm the word you've been studying. The word is so much richer when it's confirmation down in your soul. And I think it's dangerous just to allow every revelation to come from the pulpit without something birthed in your own spirit. When Jesus begins to minister in this particular instance, he ministers a parable not just a Bible story, not just a Sunday school lesson. Not just a class for those who would like to be enriched with a concept or philosophy or theological dissertation. But he speaks to us that we might be able to extract a story principles for godly living.

In the 11th verse, and a certain man had two sons. I believe that's what he said. A certain man has two sons. And the younger of them said to his father, father, give me the portions of good that fall to me. So he divided unto him his living. One of them asked for it. But both of them got it. That's all by itself. Our problem is, we become so preoccupied with the flaws and the failures and the fallacies of the younger son that we fail to appreciate the struggles of the elder son. It is indicative of a spiritual disease that is eating up the mentality of the church. Because we are so involved in dealing with obvious sins that we never start dealing with the not obvious abstract sins and we're being perfected in respect to habits and things we used to do we aren't doing anymore.

There are still a whole generation of sins that are clustered in the crevices of our heart that go unchecked because nobody deals with sins of the spirit. But in 2 Corinthians 7:1 it tells us, in fact it challenges us saying having therefore these precious promises. No doubt about it, we do have them. It's given to us by grace. It doesn't withhold the promise on the basis of our integrity or spiritual development. The promise has been allocated. Having therefore these precious promises, let us cleanse ourselves from the filthiness of the flesh and the spirit. In other words, he's saying, since God is going to give you so much and he's already told you what he's going to do in your life, then the least you could do is prepare your heart and your life so that you are ready to receive what God has for you.

Look at someone and tell them, God has something for me. You have to know that. You have to know that. You have to drive to work telling yourself where I am isn't as important as where I'm going. Because if you don't keep that in your life you'll become distracted by the noise and comfort of winds and distractions, adversities and traumas will cause you to look to this or that and you will spend all of your energy trying to deal with something that you're going to pass through anyway. My motto: if you can't fix it, outlive it. If you just keep on living, it will fall off of you after a while. You don't even have to fix everything, just keep living.

Living comes from understanding that you have a promise. And you begin to cleanse not only the filthiness of the flesh but the filthiness of your spirit. Thinking. Thinking. Negative attitudes. Hindering you from reaching your zenith in the spirit. Every sin that easily besets you, procrastination, low self-esteem, pity parties, mood swings, everything that's hindering you from walking into the full vesture of what God has dup.

That was the problem. But I came to defend him. I'm tired of people talking about him. I know, I know it doesn't look good on here. But the church always has a habit to pick on people who have filthiness of the flesh. Any time it's a problem we can see because we love things that we can readily see with our eyes, we don't have any trouble talking about somebody who has weakness in an area. I know I'm not excusing him. I'm not trying to excuse him. I'm not trying to get him apart. I recognize he has some problems.

The enemy knows he can't send a famine when you have food. He waits until you're broke, busted and disgusted and then he shows up and that's when your kids act crazy and you're in a lay off and in a low moment. The devil knows as long as he's in the house he can't do nothing to you. As long as you're praising God and blessing God and lifting him up and clapping your hands and rejoicing. He waits until you're broke, busted and disgusted and tired and defeated and at the end of your rope and he attacks you. He attacks you.

If it was good or bad if he wanted it, he went after it. Rather than keep trying to recycle some of the church folks I would rather get old sinner we pulled out of the sewer because when they get saved they go after God with a passion. While you're fixing your hat and doing your nails and trying to look cute they'll lay prostrate on the floor and cry in the holy ghost because they're so glad nobody the number. High on Jesus as they were on crack. They're so glad God brought them out. They adopt care who is looking at them. They didn't care who was looking at them when they were drunk and they don't care who is looking at them now. Pray, pray, pray. Look at somebody, say, I don't care what you think.

Indecisive. Procrastinating. Self righteous. Hypocritical. I know he doesn't have anything filthiness of the flesh. But he has a filthy spirit. I'm coming after him tonight. A filthy spirit. There he is sitting in the house. Wanting everything the other brother did that wouldn't make a move. The younger brother went to the father and asked him for portion of goods that fell to him and the father divided unto them his living. The other brother has something he hasn't asked for.

A problem with him. He's nice, he's neat, he's all dressed up and his hair is combed and he understands church protocol and church order. He knows who to honor and who to recognize and he knows who the top ten preachers and everything about church service and everything about everything. But my problem with him is he's too quiet. He's just a little too quiet. He's a dreamer but he's not a mover. He's a want to be but he unto the know how to make it happen. He wishes he could but he doesn't. And he walks through life silent.

Going through the motions. He didn't leave when the younger brother left. He stayed at home. He's been in the church a long time. It's just he doesn't do anything while he's there. No accomplishment, no results. Going through the motions. Working in the house. Formed of Godliness. No power. No power. He doesn't speak through the bulk of the story. He doesn't have in the faith to ask for his goods or grace to say thank you when he gets them. He's numb. He's placid. He's weak. He's mundane. And he doesn't say anything until his brother gets blessed again. He can't stand to see his brother blessed. He's got a filthy spirit. He's got a jealous attitude. He's mad because God is merciful. He's upset because God would raise up somebody he knew something about. He doesn't have filthy flesh but maybe you don't know anybody like that, I'm sorry.

There are some people who got a filthy spirit. And the moment you start to get blessed now they got a problem. The prodigal son comes home, gets his ring, gets his robe, gets his calf and throws a party. Ain't no kind of party like the party that goes on in somebody's life who knows they have no right to be blessed. They know they don't deserve to be blessed. They're not sitting back trying to argue over who will be the president of willing to work and willing to get out of bed and willing to go on committee. They're just glad to be saved. They don't care who sits on the right side and who sits on the left side. They're glad to be a child.

You ain't seen nobody dance until you seen somebody there who knows they should have been dead and gone. Could have lost their mind. Could have been strung out. Could have od'd on the streets. Could have died in the car wreck. But God who is rich in mercy looked beyond. Touch your neighbor, tell them, "he's talking about me now". Glad to be in the number. Glad that I'm in church. Glad I'm not looking for the dope man tonight. Glad I'm not cruising down the street. Glad I'm not in the emergency room. I'm just glad. Touch your neighbor behind you and say "excuse me but I'm throwing a party tonight". My row is having a party. Come over to my house.

The elder son heard the sound of the party. He's not glad. Have you ever got blessed, couldn't find anybody that was glad for you? Have you ever got a blessing or miracle and want to pick up the phone and tell somebody but you thought... You know when you can't find nobody that's glad for you , nobody that will celebrate you, don't cancel the party because you don't have an attender. Throw your own party, bake your own cake, put on your hat and blow your own whistle and say this is the day the Lord has made. I will rejoice!