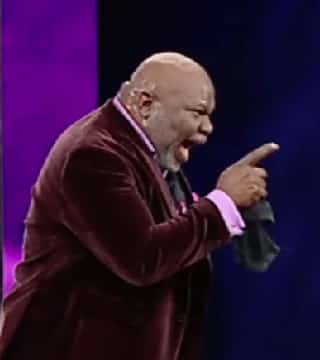 Hey, I'm so thankful to have an opportunity to be with you today, to interject thought into the chaos of situations and circumstances that may be going on in your life right now is my chiefest joy. And so, it affords me a pleasure to share this particular Word with you because I know that the entrance of God's Word giveth light. Let there be light.

See, you're not serious about it. That's why it's not gonna work for you. You're not serious about it. You would rather pray for money. You don't have to pray for money. If you become an answer, people will start throwin' money at you because you are... that's why you got the interview, is to show the boss that you're an answer. If you show me you're an answer, I will pay to have you because, as I told you a few weeks ago, sacrifice always determines value. You think you have a problem, but what you have is an opportunity to show you are an answer. This is prophetic for somebody. Somethin' is about to happen in your life. Things are gettin' ready to shift in a radical way.

Potiphar sees Joseph as an answer. And now, Joseph is runnin' a man's house without payin' for the house he's running. That's favor, when God drops you into a situation and you get to lay in that bed, and live in that house, and enjoy that blessing that you didn't have work for. I don't know whether your faith is ready for this, but God will give you houses that you didn't build, vineyards that you didn't even grow. He'll give you opportunities that don't match your background, your education, your pedigree. It's not on your resume, but when God opens up a door, he's gonna set you into a supernatural blessing.

I'm tryin' to tell you, you don't have to go out lookin' for the blessing. The blessing is gonna come lookin' for you. In fact, stop lookin' for the blessing and find the problem. Click, it's gonna open up... Click. Shh, shh, I'm listenin'. I'm listenin' for the click. When I hear the click, I will no longer despise all the dents in me. Because I'll understand it's the dents in me that made me fit the situation. So I'll start sayin', "It was good for me that I was afflicted. Because if I wasn't afflicted like this, I couldn't open up this opportunity like this". Slap your neighbor and tell 'em, "You 'bout to open something". Click into your next dimension.

As long as Potiphar saw Joseph as an answer, he got to stay in the house. Until his wife fell in love with him, and that became a problem. And when Potiphar looked at him and saw him as a problem and not an answer, he goes back down. So, somebody's problem is somebody's answer. That means that just because you say I'm a problem, doesn't mean that I can't be somebody else's answer. So I can't let how you see me determine my value. Just because you see me as a problem doesn't mean I can't be an answer. Oh, wait, is anybody gettin' this?

See, I came in here the other day. I brought my grandkids in 'cause they were visitin'. My family was here. And they had a bunch of friends with them. I took 'em on the tour, showed 'em the new building, and then we came right here, and all of 'em wanted to take a picture. The problem was, all the lights weren't on in the sanctuary. So Charlotte turned on some lights, but it wasn't enough lights to get a good picture. Now, my grandbaby, Kenzie, how old is Kenzie? Six, Kenzie's six years old. All them little kids are on these steps right here, about to take a picture. And we're gettin' ready to take the picture, but the picture's gonna be dark.

So, Pharaoh had never met Joseph. Pharaoh had never met him. So he didn't know anything about what his brothers had saw him as. He didn't know anything about what Potiphar's wife had said about him. When Pharaoh heard of Joseph, he heard of Joseph as an answer. The butler is now sayin', "When we were in prison, we had a dream that was a problem. We went to this guy, who's also in prison, and he gave us the answer". Pharaoh now says, "Send for him". Somebody gettin' ready to send for you. I mean, you've been surrounded by inmates. You've been surrounded by other prisoners. You've been surrounded by other issues. You are with them, but you are not one of them. God is gettin' ready to reach his hand right down into that situation and snatch you... who am I preachin' to?

So, he said, "Go get Joseph because Joseph is the answer". The famine was a blessing. If it weren't for the famine, Joseph would have died in jail. The famine created a need that Pharaoh couldn't supply that gave Joseph an opportunity for his gifts to operate. Because God knew that "the gifts will make room for a man and bring him before great men". See, but the problem with you, you don't appreciate your own gift.

They told Joseph, they said, "Pharaoh wants you". Joseph doesn't doubt. He doesn't argue. He doesn't draw back. He doesn't seem intimidated. Y'all don't hear what I'm sayin'. Why does Joseph not feel intimidated? Joseph has never been in a place in his life. He has no training for it. He has no background for it. But Joseph is cut in all the right places. Joseph now recognizes, from the time he was a kid wearin' that coat, it was preparin' him for the robe. Y'all don't hear what I'm sayin'. He says, "When I was runnin' Potiphar's house, it was training to run the nation".

Now understands what I'm gonna tell you. Everything that Joseph lost he was supposed to lose because everything he lost was preparing him for this. And had he been successful and stayed in Potiphar's house, he would have settled for something that was less. This is God's Word to somebody. Stop cryin' over what you lost. God let you lose it because it is less than what he's about to give you. Somebody holler, "Lord, make me an answer".

I don't know who I'm preaching to, but whoever it is, give him a praise right now. You're getting ready. Touch your neighbor and say, "Get ready, get ready, get ready". Listen, you don't have long to get ready. The Bible said that "Joseph shaved himself, changed his garments, and went before Pharaoh". You gotta get ready for what God is about to do in your life. So, I'm goin' to cut off everything that looks like where I came from. He shaved himself. We gotta shave fast. Everything you went through that's hangin' onto you, that's worryin' your mind, that's holdin' you down, shave it off right now.

Tell your prison, tell the other inmates, "I'll never, I'll never be back". Break loose, and give God a praise. I'm gonna pick this up. Somebody holler, "Make me an answer". What I want 'em to see, that the moment they saw him as an answer, he went from being a prisoner to being a prince, from being an inmate to controlling the gross national product of an entire country. He went to Pharaoh and Pharaoh took his ring off and put it on him, gave him a chariot right behind his.

Now, listen to this because this is a prophetic utterance. God either has or is about to put you into a situation where you are completely out of your element to do something that you have never done like you have never done in your life. The enemy is gonna try to get you to reject the position because of your condition. But if you submit to your condition, you're gonna lose the palace and find yourself in a prison. God is gonna set you into a situation that feels too big for you because he has made you an answer.

Now, listen to this. You see how broken you are, and all of your mistakes, and all of your crazy ways, and what happened to you, and what you went through, and how you feel, and what you think. But God was shapin' you to fit. Every place you tried this key before... have you ever stuck a key in a lock and it went in, but it wouldn't turn? Every blessing you had your way, and it never turned, because it was practice. This is the season for you to come into the place that you will never forfeit. But you have to see your uniqueness as an answer and not a problem. Because if you keep seeing it as a problem, you will keep staying in the prison. You've gotta say, "Oh, God, I thank you that I went through everything I went through, because it prepared me for what you're about to do in my life".