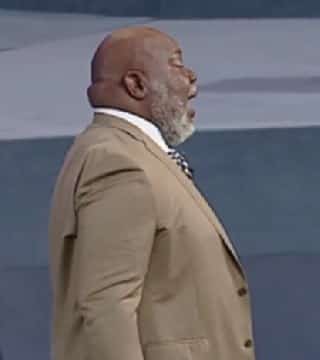 Hey, everybody, I'm so excited to have this opportunity to bring the Word of God to you. What a great time it is to really dig deep down into the Word and to discover what God is doing with us during this season. The message today is powerful. It is, in fact, life changing. It is called "Hatching Greatness". People think you either have it or you don't. That's not true. You can have and underutilize it, maybe never even discovered it. It has to be hatched. It has to be developed. Come on, and go with me to Deuteronomy 32:11 through 13, and there, you will find the Word of the Lord for you today.

I started studyin' about eagles because I have never seen the inside of the egg. The egg's only about 2 inches around. It's very small for what the eagle is gonna be. When the eagle gets through growin', 1 wing is 9 feet long. But when it comes here, the whole egg is 2 inches in circumference. "Despise not the day of small beginnings". What you start out as has nothin' to do with what you're gonna turn out to be. Don't allow people to measure you at your point of entry because out of a small thing, a great thing is going to come. But you gotta hatch it. Somebody say, "I'm gonna hatch it".

So, God says, "That's exactly what it's gonna be like". He says, "You're gonna start out in the small things, and it's amazing to me because in order for the eagle to grow to the point that it can break out of its outer encasement, there's a process involved. Touch your neighbor and say, "I'm goin' through the process". In the process of going through it, there is an ultrasound of greatness that comes along that if you could see inside the egg, not only is the eagle, the little baby eaglet developing muscles and tissues and bones, there's something else that's being developed in the little eaglet called an egg tooth.

Are y'all hearin' what I'm sayin'? That means that the eaglet is still in there, but it's breathing. Anything that you're gonna develop has to develop in a way behind a wall, behind a barrier, behind an obstacle. Gestation comes through frustration. When the thing on the inside gets bigger than the thing on the outside, that is a frustrating experience, "I can't move. I can't turn. I can't get outta here". And yet, there is no sign on the outside that nothing that the eagle bird is doing, the mother is working. That mother eagle has to sit on an egg that's not movin', no way to test to see if my sitting is working. "Is my loving working"? "Is my giving working"? "Is my teaching working"? But the mother eagle has to sit on somethin' that's not working and trust the process.

Greatness has to be hatched. I've got people in this room right now who have been with me since I was in high school, known me since I was in high school. I've got people who were with me at my first church. Why would people who were in my first church, when I was 22, be with me when I'm 60? Because I sat on 'em. Sitting on somebody produces a loyalty where you invest it and you can't get a return where you don't make an investment. Some of you are trying to get a return when you haven't made ample investment. I'm not sayin' you haven't done anything, but you haven't made ample investment.

As a young pastor, I used to envy Pastor Mabel Paige, and some of the other people in the area I came from 'cause they had all these loyal sons and daughters who were with them on the road. And I remember cryin' out to God, "When I go somewhere, it's just me and a couple of people, and she got 5 o 6 cars goin' When am I gonna have somebody that's loyal to my vision, gonna support me, gonna...? When am I gonna have some people who love and appreciate what I'm doin' in the ministry? When am I gonna get to teach Bible class and be more than five people there"?

I didn't understand, greatness has to be hatched. After you suffer a while, you earn the right to be respected. You don't get respected just 'cause you want it. You have to lay there and sit on it a while. The eaglet develops an egg tooth, and when the egg tooth gets hard, it starts to break through an inner sac so it can breathe.It's still trapped. But I can get air. And that egg tooth gets harder.

What God sends at one stage as a protection will become a problem at another stage. God sent Jacob and his sons to Egypt to eat. It was a blessing at first. But several generations later, they were enslaved in what was a blessing. Anytime you stay at one stage too long, it creates a problem. Life is a series of breaking through what was a blessing, has become a burden, and now you have to have the courage to see what's in the next dimension.

Every Bible class, every Sunday school, every Vacation Bible School, you gotta just keep on makin' a dent in it. I don't know who this is for, but I sense a spirit of frustration and discouragement has been tryin' to talk you out of the process. And the reason you had to be here this Sunday mornin' is that the Holy Ghost has sent me to tell you, you are makin' a dent in it. Keep on scratchin' it, rubbin' it, pullin' on it, yankin' on it, tuggin' it. You're makin' a dent in it. I wanna absolve all of you mentors of the guilt and the shame and the discouragement and the doubt that you've had and the confidence that you've lost in yourself because you were tryin' to hatch somethin' that doesn't seem to be growin'

One of the interesting points I learned is that the eagle can do nothing to help the eaglet. All she can do is sit on it. The eaglet has to crack through for itself. You cannot assume the responsibility of the mentee. The fact that they're not breakin' through doesn't mean you're not a good mentor. Mentoring people is not fighting their battles. It is not solving their problems. It is not fixing their issues. It's just putting them in an environment where they can grow and get their egg tooth so that they can make their own dent. Are you hearin' what I'm saying to you?

Can I go a little bit deeper? I wanna follow this thing about what you're breakin' in to does not look like what you're breakin' out from. When you go into the next dimension, don't bring the rules from the old dimension. What worked in the egg won't work in the nest. Are you understandin'? Oh, God, somebody's in the middle of a shift. I can feel it in this room. You're in the middle of a shift. God is bringin' you into a strange place where the rules are changin', and the order is changin', and the structure is changin', and you're out of your element. I'm gonna bypass the chance to get happy to give you some content. Life is a series of birthings. It's a series of birthings. The egg started out in the mama. It got birthed out into the nest. Then, once the eaglet fights his way out, he goes from being in the egg to being in the nest. None of it comes to stay. All of it comes to pass.

Everything in your life is going through a process of birthing. In fact, you're in a egg right now. You're in a matrix right now. You're in the world right now. This present world is not our home. I know you're fighting to stay here. I see you joggin' and exercisin' You got tummy tucks an face lifts and everything else, tryin' to act like you're not changin, but you're goin' through changes because this is not your final dimension. This is just a place you're passin' through, on your way to where God is trying to take you.

I know it's not popular. People don't teach on it anymore, but go ahead, drive your little car. Get your little house. You gonna leave all of it behind because God is gettin' you ready for somethin' that's so much better than anything you ever had before. Keep pippin'. If the eaglet can't say, "Goodbye," to the shell, it'll never discover the nest. If you can't say, "Goodbye," to how you used to think, if you can't go through the change and develop a new culture, a new thinking, a new attitude, you're gonna be stuck on the same level. To my eaglets, I'm gonna say this, I'm gonna say one thing to the eaglets. Don't let your fear stop you from the next dimension. Because if you don't go, you will die. There is no option nor opportunity for the eaglet to stay in its comfortable place. There's not enough air in there to sustain you beyond your birthing process. You have no choice but to grow up. You have no choice but to move forward.

I'm out of time, I've gotta stop there. It's been a real joy to share this word with you. I had a strong conviction about it because I really do believe that there is greatness in every human being. You need to find the right people and the right atmosphere to hatch that thing, but my God, I believe it is down in there for you, and you could have it. Your children, give this in their heart and in their spirit.