TD Jakes - From Graves to Grace 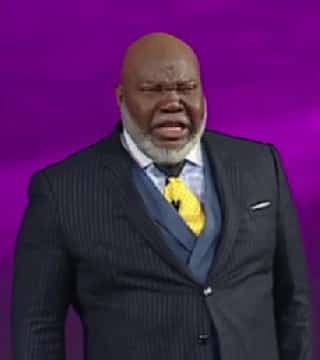 Even as he rose up from the dead with all power in his hand, all exousia, all authority is in his hand. He rose in the fullness of his power. He rose both Father, Son, and the Holy Ghost. He rose from the dead. I heard him say, Cora, "No man takes my life. I lay it down, and if I lay it down, I pick it back up again". Then Paul says, "He was raised, the same Spirit that quickened Jesus's body". So, Paul says it was the Holy Ghost. Jesus says it was him. And then later, he says, "He was raised by the glory of the Father, Son, Holy Ghost". All embodied, "This is beloved Son, in whom I'm well pleased". Holy Spirit descended like a dove, fullness of the Godhead. Everything in heaven spared no expense in his Resurrection. They didn't even get it. All of you that got it, holler at your boy. That means the fullness of the Godhead that said, "Let us make man," is the same fullness of the Godhead that was committed to raising Jesus from the dead. And Paul says, "Oh, that I may know him". The "him" he's talkin' about is the fullness of God in the power of his Resurrection.

I'm tryin' to tell you that that same fullness is ready to pay all expense to get you up out of whatever has you locked up. So, when Jesus went to the cross, he went for me. He went as me. So he went into the grave as me, and he got up as me. Paul makes the connection in Ephesians 2:1: "And you hath he quickened", "You hath he made alive, who were dead in trespasses and sins". In other words, Jesus got up as a shadow of you, glory to God. If he didn't get up, I couldn't get up. When he got up, I got up. When he died, I died with him. That's why death has no more power over me, 'cause when I accept him as my Savior, I tell sin, "I already paid the bill on Calvary. I don't owe you anymore". Jesus paid my debt, took my death, and rose up. And Paul says, "And you hath he quickened, who were dead in the trespasses and sins". It says, "He quickened you".

All of this was done so that you might know him in the power of his Resurrection. All of this was done so that you might identify with him. He got up out of the grave, and Paul says, "I got up with him". The question is, are we really resurrected? Or are we still stuck where he was? Are we still where he used to be? Are we still allowing ourselves to be trapped in a grave? Are we trapped in a grave that we have grace over? Are we living in a tomb that we should be evicted from. We are stuck in a grave that God is calling us out of, stuck in a mindset, a mentality, stuck in things because they're familiar. "And you hath he quickened, who were dead in the trespasses of sin; because in times past," the Book says, "ye walked according to the god of this world," in times past, "of whom we all had our conversations," in whom we all.

It was natural. It was natural to be nasty. It was by nature the children of wrath. You don't have to take little children and take 'em to a class on lyin'. Have you ever noticed? You don't even have to teach a three-year-old how to lie. They'll still a cookie and you say, "Who got in the cookies"? And they say, "Mm-mm-mm". Crumbs all over their mouth. Never took a class on lyin' because we are by nature, we are nasty. Don't stand there with your holy blue eyes lookin' at me, actin' like you have always been right. The Bible said, it ain't one or two of us, "We were all". "Among whom also we all had our conversations in times past in the lusts of our flesh, fulfilling the desires of the flesh and of the mind; and were by nature the children of wrath, even as others".

Give me verse 4: "But God". Run over and slap somebody and tell 'em, "He got me out of my grave". He got me out. We see the hint of this. We see it when Jesus raised Lazarus from the dead. He raised him out of the position of the dead when he called him out of the grave, "Lazarus, I'm gettin' ready to change your position, come forth. Now, disciples, change his condition. Loose the man, and let him go". I admit, I'm still changin' my condition, but my position has already been changed by the blood.

I told you, when Christ rose from the dead, he didn't rise up to continue his old life, where death was a threat. He rose up in the next dimension, to die no more. So he raised to the next dimension. "We were quickened together with Christ". Why am I living in the grave dimension, when I ought to be living in the resurrected dimension? Take me, "But God, who is rich in mercy," take me back to that. "But God, who is rich in mercy, for his great love wherewith he loved us," come on, "even when we were dead in sins, hath quickened us together with Christ, (by grace ye are saved;)," come on, "and hath raised us up together, and made us sit, and made us sit together," not in heaven.

Have you ever gone through somethin' that normally you would flip out about, but for some reason...? See, the devil mailed it to your old address, but you don't live there no more. He's seeking the living amongst the dead, and what used to drive you crazy doesn't drive you crazy anymore because God has given you such a grace, you got a peace that don't even make any sense. Who am I preaching to? Every now and then, the enemy will send a letter to your old address, and he's lookin' for you to be in the grave that you already came out of, but God has given you such a grace that you can't even explain why you're not upset. You heard what he said, but it didn't affect you like it used to affect you because you are living in heavenly places.

Final point, and I'll close. If you're going from grave to grace, you have to possess the grace. It's not gonna happen just because you go around gracey places. I watch people sit in church. I know a lot about you by how you receive the Word. You'd be surprised what I can know just by watchin' you receive the Word. Some of you are in gracey places, but you don't really seek him. You don't really open up your spirit. You don't open up your heart. The Spirit of God can fall like rain, but you don't stick out your tongue and get your mouth wet.

Everything you need is in the room right now, but your pride, your pride, you just as lost as a sock. But your pride won't let you seek out the Savior. You're surrounded with somethin' that could change the rest of your life, but you are so used to being in the trashcan of who you used to be that your pride won't let you seek. Everybody who attends a service doesn't seek in the service. I'm real good about bein' dignified. I can be dignified as anybody you know. When it comes time, I can put it on with the best of 'em. Trust me, I can hold my own. But when it's time to seek his face, ain't nothin' I'm wearin' that good. Ain't nothin' I'm drivin' that cute. No degree I attained that important. Because whatever I got, God gave it to me. Y'all didn't hear. Whatever I got, whatever I've accomplished, God gave it to me.

I'm tryin' to quit. You know, the Book said that "he shed his blood as a propitiation of our sins". I always wondered what "propitiation" meant. I looked it up, and it gave me some revelation, but it didn't give me the fullness of the revelation. I didn't fully get it until I started studying aerodynamics, that when they take space shuttles into the heavens, they have a propitiator as they change atmospheres. When they get ready to go from one atmosphere to the next, the friction of entering into the next dimension would cause the astronaut to burn up in the capsule, but they have a propitiator. The propitiator is designed so that the friction that should have burned you up, the propitiator absorbs the fiction so that the astronaut remains alive. Some of you have gone through some stuff that should have killed you, but the Bible said, "When you pass through the water, I'll be with ya. When you go through the fire".