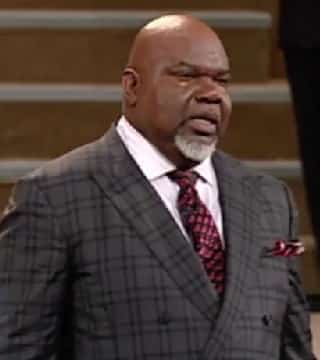 Hello, everybody. I'm so excited. I greet you Jesus' joy. And we are celebrating mothers this week, and it's so appropriate to share this Word with you. Congratulations to all the mothers everywhere for being collaborative in the creation of human souls. God has so highly favored you that he has partnered with you in giving life to the world. I pray you are celebrated and appreciated as we celebrate you during this season.

In fact, today this message really speaks to motherhood in a powerful and prolific way. The message is called, "Expectant Mothers". That oughta be all of you, and some men too, because we wanna birth the promises of God. We are looking at Ruth chapter 4, verse 13 through 19, and also Jeremiah 29:11-12. Life does not always go the way we planned it. You know that. Such was the case with Naomi. Everything was going well until the storms of life came in and made her lose hope, yet she rose again. To every mother, to every person who's ever fell into the abyss of a problem and thought it was the end of your life only to be resurrected, this Word is for you.

Nobody told her, "After you marry this guy, you're gonna have to move out of your country, and out of your house, and away from your kinpeople, that there's gonna be a famine so severe that people are gonna be dying all around you, and you're gonna have to make a decision, 'Am I gonna stay here and risk dying in the famine or go somewhere else?'" Nobody told her that she'd have to make hard choices or tough decisions and wonder whether she was doing the right thing or not. But they watched Naomi packing up the mules, and loading up the goats, and getting everything ready. "Where are you going"? Naomi said, "We're leaving out of here. We don't know how long this famine is going to last". "Where are you going"? "We're going to Moab. We're gonna load up everything, come on and get on the mule, and get on the wagon. We've got to go. We've got to get out of here. I've got something to protect and I can't let my sons die in the famine. I can't let my husband die in the famine. I can't let my marriage die in the famine". She said, "I've gotta move".

Touch your neighbor and say, "Sometimes you gotta move". You can't go down with the ship. It might look good, but don't go down with the ship. Sometimes you gotta load up what you got, and protect your investment, and head out for someplace else so that you can protect what you have. And she began to protect what she had. Touch somebody and say, "Protect what you got". Got down in Moab, and got settled down in Moab, and started eating real good, started drinking real good. The famine was over. But isn't it funny how to moment you get victory over one thing, here comes something else? Where my experienced folk? Make some noise in here. Before you can shout over one victory, "I survived the famine. I made it through the storm. I've been through the test," here comes another attack on your life. And you solved this over here and here comes that over there.

Oddly enough, Naomi had protected her sons, and her husband, and her family against the famine, and the famine didn't kill 'em, but they still died. They died and they weren't hungry. They died and they weren't thirsty. You can solve one problem but your problem has a twin. Survived the famine. Made it out of that. Celebrating the victory. We can make a life in Moab. Everything's gonna be good. Starting all over again. It might not be easy, but we're gonna make it. And they started making it, and she lost a son. And then she lost another son. And then she lost a husband.

And it was the unrealized expectations that eroded who she was. Unrealized expectations eroded her name, changed how she saw herself. Ceased to see herself as Naomi, which means "My joy". Somebody had named her Naomi when she was still a baby, fresh, new, and young. My joy. Here comes my joy. Come here, my jo-joy! Look at jo-joy! Come here, jo-joy! She's coming, but expectations when they are not realized will change your personality. She started out being called Naomi, which means "My joy," but after she lost her son, and lost another son, and lost her husband, she said, "Don't call me that anymore. My name should not be called Naomi. Don't call me 'My joy.' There's no joy left in my life".

Did you hear what I said? It may take you half of your life to give up on what you had in mind, how you defined happiness, how you defined joy, how you defined peace. It may take you most of your life. Some people never give up on trying to make things turn out the way you want them to turn out. Fifty years old and still manipulating. Sixty years old and still trying to control all the variables, trying to force your today to be your yesterday. I just want you to be what you were. To ask somebody to be what you were is to ask them to go back in a time capsule. Ooh, it got quiet, Lord. Make it like it was.

Any time your faith turns backwards and starts looking in the rearview mirror, you are using it for something it was not designed to do. You are asking faith to take you backwards and faith has no reverse. Did you hear what I said to you? Faith has no reverse. It can never take you backwards. It will always take you forward. So, here she is, and she's going forward under duress. She's stepping forward under duress. I'm going, but I don't wanna go. Barely put one foot in front of another. She's going and she don't wanna go. And here come this little gal running in behind her, saying, "I'm going with you".

She said, "Go on back home. I ain't ready to lead nobody, I can't hardly lead myself". She said, "No, as the Lord liveth, I shall not leave thee. Thy God shall be my God, thy people shall be my people. Where thou dwelleth I shall dwell and where thou diest I shall die". Orpah said, "I'm going back home". Ruth said, "I ain't got no home to go back to. I don't have no reverse in my life. I can only go forward".

See, you will never get where God wants you to be being focused on you. Write this down and never forget it. Selfish people never succeed. If you forget everything else I ever taught you in all the 15 years I've been here, selfish people never succeed. Look around you. Look at the people you know. Look at how they scheme, and trick, and scheme. When it's all over, they never succeed. As she gives up on herself and starts trying to help somebody else, this ol' young girl, "You're too young to be single, be by yourself. Come on, let me hook you up with one of my relatives. Come on over here. Come on. Now, they'll see you. Now bathe and then put some oil on. Put some oil on. Put a little cologne, and go sit at the bed, and just cover yourself with your skirts. And tell him you're gonna cover yourself with your skirts. And then tell him he's a mere kinsman to me and just lay at the foot of the bed".

Ruth came to Naomi and said, "Mama, I'm expecting". Naomi says to Ruth, "Gal, I am too. But this time, you gonna have the labor, but I'm gonna have the baby". I'm wondering if there's anybody in here that's got enough faith to believe God for a baby without labor. So, when Ruth has her baby, she brings it to Naomi. She didn't bring it to Mara, she brought it to Naomi. You can't get it being bitter. You get your joy back, you gonna see your baby. And the old woman laid the baby in her lap and all the neighbors came to see. And the weirdest thing, they did not say, "God has given Ruth a baby". They said, "God has given Naomi a baby".

Naomi holds an expected end with an unexpected process. It didn't come how I thought it was gonna come. God didn't use who I thought he was gonna use. It didn't come when I thought it was gonna come. Seemed like he would have done this when I was younger, but he saved the best for last. So, she took the baby and put it up on her bosom and became a nurse. Some theologians say that she nursed the baby, that the nursing of the baby is a prophecy of the restoration of Israel that milk would flow again. In your old age, that what you couldn't make happen at one stage in your life is released at another stage in your life.

And now, Naomi understands what it means to be an expectant mother. If things would've turned out the way she expected them to, she might've had children and grandchildren, but they would not have been kings. When they brought Obed and laid him on Naomi's lap, there's a little notation that says, "And Obed begat Jesse, and Jesse begat David". And all of a sudden, you see why God didn't let it turn out the way you thought it should turn out. You was trying to have a baby. God was trying to have a king. And the moment you give up on what you had in mind, God said, "My plan is better than your plan. I told you that my thoughts towards you are not evil, but are peaceful that you might have an expected end. I could've done it sooner, but it took all of these years to get you to let go of what you had planned so that I could give you what I had planned.

I'm out of time. I've gotta stop there, but it's been such a joy to share the Word with you. You know as well as I do that sometimes our notion of how our lives are going to be doesn't match up with our reality. This can lead to real disappointment, depression, and sometimes worst of all, it can make you bitter. The book of Ruth teaches us that there may be twists and turns that we never saw coming, but God still has a plan. That's why you should not give up. Continue to trust God and move forward in faith, and fervor, and tenacity. He will fulfill everything he has promised you. You will find God's plan is better than yours. So, trust him.