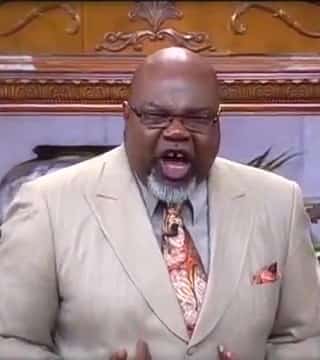 God bless you, my friends. We are together again and we're excited about it. We've been sharing a series that is blessing God's people. The series is the verge. The message today is Don't let the chatter stop you. I can't tell you how many people tweeted me at Bishop Jakes to tell me this message blessed them in a powerful way when I preached it, because so many people are distracted by the chatter around them to the point they can't focus on the goal before them. The message, Don't let the chatter stop you. Maybe what you need to get your focus back.

Now Moses is a grown man. We are seeing him close to 40 years old. He's a grown man. He's blessed. He got things he wouldn't have gotten any other way. Education. By the Egyptians. The Egyptian culture we are still studying. Their advancement in technology is still intimidating even to modern scientists today. Their architectural abilities have caused people to travel for models to study the pyramids. Moses was exposed to that the way he would never be exposed. If he hadn't gone through the adversity in his house, he wouldn't have opportunity.

Adversity. Every time he had an adversity he had opportunity. 40 years old and has the opportunities people would kill for. Opportunities other people would have died for. Got to go places, do things and understand things. Had he stayed in the house he started in, he would have never gotten. All he would know how to do is make bricks without straw. But God pulled him out.

Sometimes when God pulls you out of your natural environment, it's painful. You suffer a lot. He didn't pull you out to kill you. He pulled you out to bless you. He's near 40 years old. And he's blessed. He's blessed. He's educated. He's articulate. He's intelligent. He's bilingual. He's blessed. But he's confused. Lord, I wish I had time. You can be blessed but still be confused. He's all dressed up. And confused. He's a grown man with little boy issues. Struggling on the inside and walking around and all the Egyptian capes and all dressed up like he's a prince. He looks like a prince, but he's not. He's a Hebrew by blood but he's not. He's neither Egyptian nor Hebrew. He's stuck in the middle.

Fighting on the outside because there's fighting on the inside. I'll drill into that a little bit. Interesting point. 35 years of counseling people, I've counseled all kinds of angry men. I've counseled men who beat their wives. I mean beat them mercifully. Hit them with wrenches and stuff like that. Threw hot oil on them. Stuff like that. I never saw a man who beat his wife and liked himself. What you see on the outside is a reflection of the conflict on the inside.

I could go home now. Because if you did that thought justice, you could spend the next 24 hours going through your life saying, what do you see? Going through the trunk of your car, garage, your house, what you see on the outside is a reflection of what you see on the inside. If you're happy to live in clutter... I'll not bother you. Now, we all have to live in it. But if you're happy to live in clutter. If you're comfortable and it doesn't bother you, maybe it doesn't bother you, because what you see... He sees the fighting on the outside. It's a reflection of the fight on the inside.

He raises his hand to stop it. He's trying to stop it in them so he can stop it in him. The fight on the outside forced him to confront the conflict on the inside. He's been conflicted for 40 years. But some circumstances arose in his life that brought to the surface the inner conflict that he has in his soul. And he rises up, because now faced with Hebrew and Egyptian fighting, he now has to choose whose side are you on? 40 years has not demanded that he make a choice but one incident has pushed his emotions to the surface.

Do you choose your conditioning or your pedigree? Now he chooses his background, his heritage. And he kills answer Egyptian. Kills an Egyptian. And buries him in the sand. Looking to the left and the right. He sees nobody and buries him in the sand. 24 hours later what he sees on the outside is totally different from what he saw yesterday. He does not see an Egyptian and Hebrew fighting because he's made the choice. Only to find out there's still conflict. The Hebrews are fighting and he rises up to solve it.

Now, this is what, when a woman is birthing a baby they call it crowning. When the head first comes out. You hear the nurse say, its crowning. His greatness is crowning. But he's crowning at a time he's not positionally a place to function on the level he's able to think on. So he's functioning like a king. But he is not a king. You got internal conflict that's now gone external.

Think with me, church. One of the things I love about preaching at The Potter's House is you are a thinking people. I can't pastor people who do not think. I'm allergic to them. They make me itch. Deliver me from stupid people. Pray deliverance from evil and stupid people. I'll just insert it. Take me out. Have you ever had an argument with a fool? Lose all interest in the argument when you find out you're not even intelligent enough to debate me on this level and you say, that's okay. It's all good, baby, just chill. Rock with the music, it's all right. It doesn't even matter. Talk to the hand. Yeah. Yeah.

He's in the dilemma now and he's fighting. He's fighting his greatness is coming out. He's crowning. And when greatness crowns, it creates conflict because it does not crown when you have been placed in the position. It crowns before. You're rich before you got the money. You were educated before you got the degree. You were a preacher before they ordained you. You're a leader before you get the job. You're a visionary before you become a CEO. You're a wife before you get married. You're a husband before you find a woman. If you're not that before, you won't be after. So you have to go through a period of displacement where you have vision to function on a level and don't have opportunity. Which creates frustration. I feel this with everything I got inside of me. Nothing outside has acknowledged me on the level that I think on. And you don't feel appreciated because your thoughts are up here and your situation... Do you hear what I'm saying to you?

Now, look at the conflict for a minute. If it were not enough conflict to be an Egyptian-speaking Hebrew, a cultural conflict with an unresolved childhood. Now God is bringing greatness out of a man who doesn't have a position to match his intellect. A weaker person would have blown their brains out. This is crazy. This doesn't make any sense. Some of you are there right now. Your life doesn't make any sense. You're in the middle of your life and it doesn't make any sense because you have thoughts over here, your situation is over here. And you're still trying to work out stuff from your childhood. But you are a grown man. Praise the Lord.

And you're in this situation and you're trying to fix people around you while you're still conflicted on the inside. And you wonder how can the physician be sick? How can the healer be broken? How can I help other people and can't help myself? How can i? O God, help me to preach this thing. Am I talking to anybody today?

He has a dead man buried in the sand and out there in another fight. And before he can get out of this, here comes this, and before he can straighten out that, here comes this. Looks like every 24 hours a new fight breaks out in your life. Is there anybody in church today that every time you turn around, scared to answer the phone, scared to open up your own e-mail. You say, Lord, if another fight breaks out in my life. I got fighting on the inside. I got fighting on the outside. I got fighting in my personal life.

O God, I'm talking for somebody. I don't even know who it is. And I want you to see the irony. These two Hebrew are fighting. Moses comes out to break up the fight and one of the Hebrews, he's not trying to kill anybody. He said don't fight. One of the Hebrews said, who are you to be trying to straighten you out? Who made you prince? Who did make you prince? The Lord made him prince. But he was trying to do the right thing at the wrong time. Don't try to get there before you're there. Just because you can think there, you have not been placed there. You can be anointed and not be appointed. You can be anointed to be king over Israel, David, and then have to be sent back out there to shovel sheep dung because one of the test of greatness is your ability to survive frustration.

I'm talking to somebody. I don't know who it is, but I'm talking to somebody this morning. Here he is. I feel something about to break loose in here this morning. I feel the anointing about to break loose in here. Here's how we express ourselves. When you hear people holler like that, that means truth hits you. When truth hits you in the face, all of a sudden you have a reaction to it. Because I'm preaching to you about one thing but God is showing you different things in your life that fit what I'm preaching about. That's a miracle of preaching the gospel.

Now, on one hand, he has just discovered that he's a prince and doesn't know it. Appointed and doesn't know it. Greatness that's not revealed yet. That's a wonderful thing. In the next sentence he finds out that his past has come back to haunt him. What the first sentence should have made him say, yeah, I'll be prince over you. That's right. God is just showing you what he already showed me. But the prince is a liar. And a murderer.

You're a powerful person but you're also a tired person. And people see one side and they don't see the other side. Am I talking to anybody today? He is a prince over them. He will deliver them. He will bring them out from the hands of Pharaoh. He's all of that. He also just lied and killed a man and buried him and hid the body. Now ain't that crazy? I say all of this to comfort you. Aren't you glad you came to church this morning? Now, watch this. The enemy will always send a terrorist's alert when you are close to your destiny.