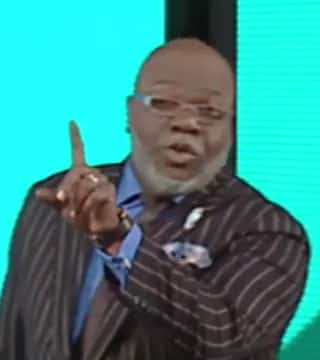 Greetings in the invincible name of Jesus Christ, our King. I am delighted and, in fact, I'm excited to have an opportunity to share with you a word that is provocative, that is profound, that is powerful. I wanna take it out of its historical context, just sharing a Bible story, and use it metaphorically to explain some issues that I think are relevant to your life, your situation, and the greater world that we're living in today. And this is a troubled world. The message comes out of Mark 8:25 through 31. It is a powerful message. I call it, "A Blind World, a Blurred Church, and a Bright Day". Take a look at this. You're gonna be blessed.

He asked the disciples, "Who do you say that I am"? Immediately, all minds rush to Peter's answer but, as we rush to Peter's answer, we bypass the silence of the 11. And I wanna suggest to you today that the silence of the 11 screams much louder than the answer of the 1. How could you walk with Jesus all of this time and not perceive at all who he was, not make any stab at all? In some ways I am more embarrassed by the silence of the disciples than I am the confusion of the naysayers. At least the naysayers had developed some sort of opinion. But look at the masses of people that followed Jesus and could not make up their mind, didn't have the courage or the revelation or the understanding to even make a stab at who he was.

Oh, y'all don't hear what I'm saying. That means that Peter had stepped into some supernatural flow and had made contact with the Father without Jesus ever going to the cross. No wonder he said, "Thou art the rock and upon this rock I will build my church; and the gates of hell shall not prevail against it". Because the church is built on men who get direct revelation from the Father. Every now and then, God will send somebody and show 'em something. Oh, y'all don't hear what I'm saying. Oh, have you ever had him show you something? Have you ever had him illuminate something in your life? "Flesh and blood have not revealed this unto you but my Father which is in heaven".

See, I feel like preaching better than you feel like having church. I know that when he died, he opened up some stuff. Oh, when he died, dead men were seen walking the streets, the heavens opened up, the veil in the temple was rent, the veil in his side was cut. Let me tell you, he is the way. That's what he means when he says he is the way. "I'll make a way out of no way. I'll rip it open for ya. I'll pull it back for ya. I'll reveal myself in a fresh way because I am God and besides me there is no other".

Look at somebody and say, "He is the way". He's not a way. He's not a way. He is the way. He's the way where there is no way. And before he lets you miss it, he would rip it open to give you access into the next dimension. Oh, anybody carry an access card? I got access. Oh, glory to God. I got something better than Visa or Discover or American Express. I got Access. In the name of Jesus, things open up for me. They split open for me. They move out my way for me. He'll rip it open.

This blind man was not the only one that was blind. He's a blind man from a blind city, surrounded by 11 apostles that were blind and blurred and stumbling and struggling. And Peter had revelation insight as to who Jesus was. He's a part of the story but there is so much blindness, so much blindness in this story.

I used to preach this message. You might be able to remember. I used to call it "The Second Touch," yeah, because I would talk about the first touch when Jesus touched him and he saw men walking as trees. And then the second touch, I would talk about how when he touched him, they opened his eyes. Well, what I was preaching was true but I miscounted. Yeah, I miscounted. I didn't realize that what I was calling the first touch was really the second touch. Because the first touch came, Curtis, they brought the man to Jesus for him to heal him. Bethsaida was used to Jesus healing people. They were used to seeing him perform miracles. They brought him to Jesus for Jesus to heal him. And Jesus took him by the hand. That's the first touch. He took him by the hand and nothing about his blindness changed.

The first touch was not to heal him. It was to bring him out of the environment of doubt and fear and decadence and destruction. He said, "The reason you can't get your breakthrough is that you've been hanging around Bethsaida". Oh, do you hear what I'm saying to you? Do you hear what I'm saying to you? I've been telling you for weeks, "Don't worry about having good seed. Worry about finding good ground. 'Cause if you got good seed but you're in bad ground, you can't get what you need".

Now Jesus took with him Peter, James, and John. It's always about threes. My God, what in the world was I thinking about, talking about the second touch? It's gonna take more than two to get us home. Hallelujah, it's always about threes. The first touch pulls you out of it. Out of the environment, out of the influences. Away from the naysayers, away from the doubters, away from the people who have defined you by how they met you, who have called you the blind man. They don't even know your name. They call you by how they met you. Oh, but when I finish with you, I'm gonna define you. I'm gonna start you over. I'm gonna set you free in the first touch.

So he touched him and then he tested him. Said, "What do you see"? He says, "I see men walking as trees". So this brings me to the blurred stage of the second touch. The blurred stage. He saw men walking as trees. And later when we read the story, we will find that the disciples knew that Christ was the Messiah but didn't know that he would go to the cross. So Jesus is surrounded by people who can see men but not see the tree.

How could Peter see so clearly that he could make connection with the Father and see that Jesus was the Christ but he was blind to the cross? And when it came to the cross, Jesus called him a devil and said, "Get behind me because thou savors not the things of God," but yet, just a moment ago, was saying I was a rock. Well, I can be a rock about this... Oh, no. Y'all aren't gonna talk to me. In the same story, the rock and the devil are all sitting in the same man. In the same story. He's rock about this but he's devilish about that. I know nobody in here understands. Nobody in here understands and I know you're too much church folk to admit that you understand.

So if you keep looking straight ahead and look confused, nobody will know the struggle that goes on inside of you that while you are righteous about this, you are wrong about that. While you are spiritual over here, you are carnal over here. How dare you judge somebody else when you are running around with your blurred self? You mean you can't talk to nobody blind? You just one step away from blindness yourself. You're not clear on everything either. Living in the blur, I'm not what I used to be but I'm not what I'm going to be. I am in the blurred stage. Stop making definitive statements while you're in a blur.

Whoa! That was worth getting out the bed this morning. That one statement right there, it's worth everything you went through to get here. Because I have seen people kill their future by the decisions they made in a blurred stage. You'd be surprised what you can't tell. If I take my glasses off, I can see you. I can see you. But your details get blurry. So I can't really see you. I know you're sitting there. I know what color you got on. I know whether you're a man or a woman but I can't see the details 'cause I'm in a blurred stage. And for preaching, I can preach with my glasses off but if I had to shoot a mosquito off the back of your shoulder, you wouldn't want me to shoot from a blurred stage.

I don't know whether to move about. I don't know whether to plant because I have learned the dangers of making decisions in the blur. The church is in a blurred stage. And if we would just humble down and stop trying to act like we can see more than we can see. What I like about this man is that he was honest. He didn't try to act like he could see more than he could see, that he knew more than he knew. Most of what you know is what somebody read, what you read in a book, some man told you, what you were taught. You think the way you think because of the environment that you came up in.

If this man would have lied about how well he could see, he would have never been made whole. What God had healed was not so much faith, it was honesty. It was the courage to say, "I'm better than I was, but I still don't have it like I'd like to have it. I'm in a blurred stage right now". See, the devil doesn't want you to be honest. He wants you to be impressive. He wants you to walk around with your chest stuck out, guarding your reputation, making people think that you're more than you are. But the Bible said that if you humble yourself, God will exalt you. If you come down off your high horse, God will raise you up. If you admit I can't see as good as I would like, God said, "I'll give a second touch but I will only give it to an honest man".