TD Jakes - The God of the Night Before 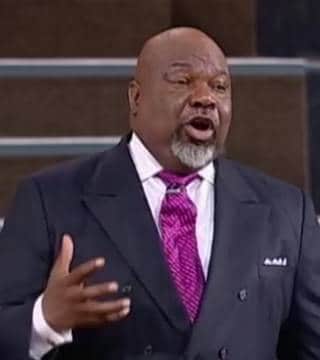 How would your life change, if everywhere you got ready to go, you had to travel by foot? Imagine how much further and how much longer it would take for you to get to a simple distance like Houston if you had to travel by foot? It might be a trip you make once in your life. If you had to walk to Houston, come on, you wouldn't go twice a year or three times a year, or four times a year. You might go once in your lifetime. Imagine how many stops you would have to make along the way. If you and your family got ready to go to Houston and you traveled on a donkey, how long would it take you to get there? So, then, it's not just how far you have to go in your destination. It's the circumstances that you have to travel with.

Sometimes you are very close to your destination, closer than you think, closer than you imagined, closer than you would have believed possible, and the enemy can't change the distance. It is as close as it is. When you're close, he can't stop ya from being close, and the Holy Spirit will let you know when you're close. "You are nearer to your salvation than when you first believed". "You are closer now than you've ever been in your life". Have you ever had those words from God? "Don't give up. Don't give out. Hold on. The blessing is close. The blessing is close. You're near to it. You're on the verge on it. You're on the edge. You're about to step into it". It's not the distance. The enemy can't change the distance. He can't take the goal and move it back.

The fact, the Bible says, "Forgetting those things which are behind and reaching to those things which are before. We press toward the mark of the prize of the high calling of God". It's marked. It is where it is, and the devil can't keep movin' it back, but it does feel like that sometimes. It feels like every time you're on the verge of finally gettin' your hands around the thing you believe that God to do, that the devil said, "Uh-uh, no, I'm movin' it back. Now, keep comin'. I'm movin' it back". He can't move it back. He can't move it back. He can't move it back, and it's not far. In fact, it really wasn't far to go from Egypt to the Promised Land. It wasn't far. It should've taken a few days, about three days to get there. The three days. It ended up 40 years. Isn't it amazing how somethin' that should've happened quick can take a long time? It's not like they kept movin' the Promised Land. Hah-hah, no, come on, no, come on, come on. Ha-ha, no, you're not there yet for 40 year, hm. It was always where it was supposed to be.

The problem with most people when they read the Bible, it said they're reading from the other side of the story. We're reading about Jesus and Mary and Joseph, 2.000 years later. We know how the story ends. We know everything works out okay. We also know who he is to us, everything, but imagine if you were Joseph, and you had found a beautiful young lady that you had been seeing for some time and announced to all of your friends that she was gonna be your bride, and you had begun to set in place the things that were necessary to endow her and to give her a dowry and to honor her, and to recognize her, but before you could get to the wedding, she started pickin' up weight, I mean, a lot of weight, all in the middle.

And being a gentleman, you didn't wanna say anything about it 'cause, you know, you notice things, but you don't say anything at first, but after a while, it will force some conversation. "Baby, you gettin' kind of thick". She says, "Joey, I've been meanin' to tell you. I got some circumstances have come up". "Circumstances? What do you mean"? "And you're not gon' believe this. I've been waitin' on a good time to tell ya. I didn't know how to tell you this because you're... uh, I'm expectin'". "Expectin' what"? "I'm expectin'". "A baby"? "Yeah, but wait now. Don't get this wrong. Don't get this wrong. Now, I know this, never been through that like that before, but, um, um, this is the Lord's doin'". "Yeah, right".

Joseph walked away from her and and said, "Now gotta live with this. Everybody knows about it too". Have you ever loved and been angry at the same time? Isn't that a feelin'? The kind of feelin' where you wanna slap somebody down the stairs, but then, you love 'em so bad, you got to run down there and catch 'em? So Joseph said, "Okay, uh, I'mma put you away privately". He said, "I'mma get out of this privately". In the Bible, an engagement was like a marriage. It required a bill of divorcement to get out of it. So he said, "We're gon' discreetly go down to the lawyer and just sign the papers, and we'll get out of this". And then, when he's gettin' ready to go down to sign the papers to put her away, and she's distraught because she told him the truth and he doesn't believe her, and you know how it is when a woman tells you the truth, and you don't believe her?

"I told you this. No, don't, uh-uh, don't. I told you, listen, you. You don't believe me. That's what's wrong". And the angel has to speak to Joseph and say, "Fear not. That, that is in Mary is conceived by the Holy Ghost". Now he's really confused 'cause now he's tryin' to believe somethin' that common sense tells him couldn't be possible. His faith and his reasoning are now in conflict. He has now told her that he's about to give her a bill of divorcement. Now God has said that she's tellin' the truth. Now you have got to go back and tell somebody that you have already said, "I don't believe you," that "Maybe you are right". And on top of all of this conflict that's goin' on, she's so upset, she has gone over to her cousin's house, who's been shut up for months, who's pregnant too. You know, which is basically, "I'm goin' home to Mama".

Can you imagine what Joseph's friends must've been tellin' him? "You ain't gotta do this, man". Conflicted. Can you imagine what it'd be like to be Mary and be tellin' somebody the truth, and them not truly believe you, and now they're tryin' to go along with it, but they've already exposed the fact that they was gon' get rid of you? How comfortable are you with a guy who's told you that he was get ready to get riding you? And here they are, goin' down the road, tryin' to deal with this issue, and now, on top of all of this, a new tax has come out, and in order to deal with the taxation, you have to go back to the city that the groom is from, to pay the bill. "Now we got a debt we weren't expectin'. We got a baby we weren't lookin' for. We got a crisis that makes me look like a fool, and we got to walk to Bethlehem.

They're walkin' down there by foot with a pregnant woman in the heat of the Middle East, no air-conditioning, no fan, no music, no padded seats. She's pregnant on a donkey, in the heat, travelin' through the hot sands, inconvenienced with somebody that you at odds with on the night before Christmas, and all in the back of her mind, she's hearin' God sayin', "Hail, Mary, you've been highly favored amongst women". "I got a man who don't believe in me. I got a donkey who's knockin' me all over the place. My feet are swollen. I got a mask on my face. I got to stop and throw up every so-many miles. I'm still miles away from getting to the destination. My back hurts. My feet hurts. I feel like I'm about to go into labor. I don't have any confidence in this guy 'cause he was gettin' ready to get rid of me, and you're tellin' me that I am highly favored".

She's already pregnant, and it's already hot. She's about to go into labor. The relationship is not goin' good. She's pregnant by the Lord, and you tryin' to deal with this and be respectable and tryin' to believe that God is somehow in this situation. Have you ever had a situation, and you was tryin' to believe that God was in it? I mean, you know, "God must be in there somewhere. I don't know where, I don't know how, I don't know what he's up to, but God has got to be in here. Hello, are you in there? Hello, God? Where are you"? It always looks like that on the night before. "God, where are you? Where are... hello"? Job said, "I looked for him on the right. He was not there. I looked for him on the left". Have you ever looked for God in your situation and said, "Where are you? This is the worst time in the world for me to be dealin' with this mess. God, where are the promises? Where's the stuff Bishop been preachin' about? Where in the seven steps to the turnaround? Where is the unprecedented"...

And David warned us about this. He told us specifically, "Weeping may endure for a night". Lord, I wish he done told me how long the night can be. Lord, have mercy. That's another thing I didn't picture right. I thought he was just talkin' to me about, you know, about six to eight hours or somethin' like that, but that's not the kind of night. He's talkin' that this is a long night. This can be months and months and months of night, like you're in Alaska, your "night". This can be in the hospital for months and months and months, "night". The night can be so long, you could lose your car and your house and your credit rating. It can be a long night. And he says, "Weeping may endure for a night". I can picture Joseph and Mary and a couple of goats and a chicken, and a donkey, traveling down the road, she half-talkin', he half-talkin', and now they finally got to a place to stay, and the innkeeper comin' out, talkin' about, "I sure would love to help you. I really would love to help ya, but there's no room, but just go down. Go down".

"Look, I've been walking". "No, it's not that much further, but just, just, oh, oh, I don't know, maybe about a week down the road, and, uh, to the left, there's another inn over there, and I know him. He'll be glad to take care of you". And he walks on down there, and they say, "Well, you know, if you'd have just got here sooner". Have you ever had somebody tell you, "If you'd just get here sooner"? After about three hotels, or four, rejected him, now he got to go back and say, "Look, Mary, it is really tough to"... You know, that's how you do when you're gettin' ready to say it. The thing that amazed me, 'cause I'm into families and tryin' to understand families and building the strength of families and all of that, I would've thought that the Lord would've came into a very functional, happy, robust, loving relationship, but the Lord picked a couple of folks who probably wasn't even speakin'.