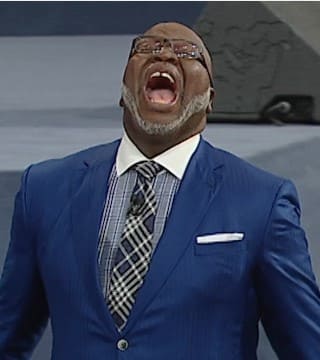 In my text this morning we are dealing with the apostle Paul. He is the epitome of strength. He is a bulwark of faith. Up under his ministry he has begun to evangelize the final frontiers of Christianity, having approached the Jews and them largely rejecting him and even those that accepted the other apostles were beginning to apostatize. He had found a fruitful place of evangelizing the Gentiles. His ministry was booming, because they that are not sick don't need a physician, but it was booming in the refuse of human pain. He was flourishing in places of idolatry, bigotry, sexual immorality.

His message was well received by broken people who accepted his message but were hard to lead. They followed him on broken legs and when your followers are crippled you can feel the weight of every addition that connects with you. Oh, my God. The apostle Paul was eloquent of speech. He was intellectually fluent. He was intelligent. He was articulate. He was well-spoken. He was respected as a sage in his age, philosophically astute. He ran around with other thinkers of his era and was respected for his intellectual depth, and yet in spite of his intellectual depth and his spiritual prowess being so strong that he could stop speaking and walk down the steps and raise a man from the dead and never lose his thought.

All of us have been rated for a certain amount of pressure. "Oh, he ain't got no Bible for that today". Well, why you keep saying that the Lord will put more on you than what you can bear? The very fact that there is a limit to what you can bear is an admission that there is a weight load that is too much for you. There is a weight load that is too much and when it is too much, when it is too much that's when we really want other people to help us with the load. That's when we desperately want somebody to lift this up off of me and most of the time we reach out to them because we have pressure beyond our PSI and when they disappoint us it is not the agony of living without them.

It is the agony of going back to a weight load I must bear alone. Might have been how Jesus felt when he went to the Garden of Gethsemane. "Come on and go with me. This is too much for me. Will thou watch with me for one hour"? How many of you have ever been disappointed because the people you were counting on to watch with you walked off and left you holding the bag? And you wouldn't have minded holding the bag, but the bag was too heavy and the pressures were too great, and you can't open up to anybody. And I defy you to tell me that you're so spiritual you can't relate, because if you got spiritual, you got spiritual from reading the Word of God and here is the guy who wrote it.

If the guy who wrote it says, "Life almost killed me," you can't tell me that the guy who read it can say, "Nothing bothers me". If Jesus who died for your sins got a weight load so heavy that he begged three disciples to, "Wake up and go through this with me," they fell asleep on him, then you're not gonna tell me that your heart doesn't ache when people fall asleep and leave you carrying weight beyond your weight load. He says, "I was pressed above measure. I had more pressure on me than I could count".

You'd be surprised at the people in this room who have more pressure on them than they could count. They're smiling, "Good morning. Praise the Lord. How are you today? Oh, you look nice in blue. That's a lovely color. I love your tie," and nobody knows that the top of your head is about to come off because you are up under pressure. Life is pressure. Age is pressure. Love is pressure. We keep asking for stuff and stuff is pressure.

"Oh, I want children, Jesus. I want everybody to touch and agree with me that I can have a baby, Lord," never understanding that a baby is pressure. "I wanna be married by the time I'm 30". You want a husband, but you don't realize that having a man is, oh, y'all aren't gonna talk to me. Don't even get me started. I'm not even gonna say nothing about it. I'm just gonna leave that alone. "I wanna be the CEO of the company," never understanding that more power is more pressure and all of a sudden without ever stopping to measure. You never measure. It's like me telling my wife I'm tired. We have the funniest conversation, 'cause tired is always a shock to me. I'm just not supposed to be tired, and I said, "Honey, I'm tired".

And she say, "I guess you are," and then she start telling me what all I've been doing. That I didn't realize that I was doing as much as I was doing, because when you're a doer you don't measure. You just do what's gotta be done, and you never take in account that you kept taking on more and more and more and more without letting things go. I'm just now learning to just say No. In fact, the reason the apostle Paul was writing Corinth is because they were angry because he wasn't coming, and he wrote them a letter to adjust their expectation to the reality that "even though I'm your leader, I've been going through something.

See, as an encourager... I know when I've preached my best stuff, because when I preach my best stuff and you go home encouraged, I go home discouraged. And the deeper the discouragement the better the message was, because the courage that I had, I gave it to you, so you got encouraged. But then, the virtue goes out of me. You remember when Jesus said, "Who touched me"? The virtue goes out of the giver. The virtue goes out of the giver, not the receiver, so when you are a giver, after you have given, there is a depletion that is inherent in being a giver. That you have to absorb the collateral damage of always being available to other people.

Can I drop some real stuff on you this morning? So, the more opulent, effusive, effective somebody is, the more empty they become, see? My Jeep, it's full of gas right now. My Jeep is full of gas right now. You know why it's full? Nobody drove it this week. The more you drive it, the emptier it gets. If you've been drove hard, you're empty and the problem with you is you know how to work better than you know how cry for help. And you can literally burn up around people who love you. It's not that they don't love you, but they would never imagine that the apostle could be tired. Not Mama. Mama couldn't. That's just how Mama is. Mama just like, you know how Mama is. She's just, see, when you're good at whatever you do, one of the ways you know you're good is when people take you for granted.

I'm going through the Garden of Gethsemane, and I carried you because we got covenant, and I figure reciprocity. That if I give it to you, surely out of all the disciples, I took you everywhere. I did everything with you. If I can't count on nobody else I know I got you. I didn't take Andrew or Bartholomew or none of them. I brought you with me 'cause I took you places. I didn't take nobody. I took you on the Mount of Transfiguration. I did all kinda stuff for you. I knew I could count on you and the truth of the matter is when you get to the Garden of Gethsemane you got to go alone. Gethsemane was a place where olives grew. Its name means "the place of pressing".

Oh, I'm gonna preach this thing today. They was awake when I was raising the dead, but when I'm vulnerable myself they are asleep, so I come to the garden alone and the garden is the place of pressing. And when God gets ready to press on you, he will press on you alone. The pressure got so great that Jesus had to pray three times. Now, if Jesus had to pray three times, you know good and well you can't deal with this without prayer.

And so, he was in the Garden of Gethsemane and Gethsemane is the place of pressing, and they called it the place of pressing because it was there that they turned the olives into olive oil. It was there that they crushed the olive to get the oil out. The only way to get the oil out of the olive was to press it. For every person in this room who's ever had anybody fall asleep on 'em, who's ever poured more into people than you got back out of 'em, who's been working at a deficit, who's been at your, burning the candle at both ends, my mother would say, and everybody you thought you could count on has forsaken you, I want you to know that when the pressing is over the oil is gonna flow.

I'm speaking for somebody who is secretly suffering and wondering, "Does anybody care"? And I wanna minister to you. Some of you are so stressed out, you can't see the forest for the trees. You can't see what's right for talking about what's wrong, and you've played that movie over and over and over again, but this morning God wants to cast it down.

I wanna make a passionate plea for people who are pressed above measure and beyond strength and some of you have despaired of life itself. You stopped living, and you don't even know when you stopped living. You're just existing, going through the motions. We might have a robot driving your car. We could have put a can of green beans in that suit. You're not even in there. You're not even there. You respond upon command. Your creativity has withered. Your enthusiasm has withered. Your house is haunted by ghosts in the past or anxious about fears of the future. Either way, you are pressed, and you came to church this morning. You didn't come 'cause you had a new dress. You didn't come because you had a pretty necklace you wanted everybody to see. You didn't come 'cause you had a brand-new red tie you wanted to wear with the white suit.