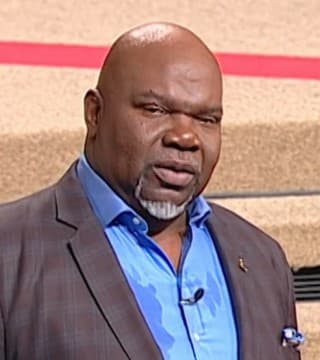 In my text this morning, we are following the Apostle Paul on a journey for the Lord. There are some concepts, I just pulled a few life lessons that I wanna share with you this morning that will keep you from drowning in shallow water. Touch your neighbor and say, "Are you listening this morning"?

Has anybody ever gone through a secret storm? See, when you're going through a visible storm, somebody will hand you an umbrella, or a raft, or some help, or some assistance, because they are aware of your suffering, but when you're going through a secret storm, there is no comfort there because nobody knows that you're dealing with a secret storm. They're jealous of the car you're driving, not knowing that it's two payments behind. They're envious of the position that you were promoted to, not knowing that now that you're promoted into that position, you can't even rest at night. You can't even sleep at night. You've got so much pressure and so much responsibility on you, and, all of a sudden, you're in a storm and nobody even knows it.

I heard him myself. I heard him myself. I heard him when he said he promised me when you pass through the water, I'll be with you. He wouldn't have said that if his presence was apparent. Because you never promise the obvious. He said, "But when you pass through the water, you got my word on it. I am in there with you. You may not see me, you may not feel me, you may not sense me, but I tell you what, all the while you're stroking in the water, understand you are not stroking by yourself". Don't be so aware of the storm that you lose awareness of the God in the storm. I wonder if Peter wouldn't have done better steering the ship from the bottom of the boat. Instead of steering in the sensual realm, where the storm lives, the real guide was in the bottom of the boat.

Yeah, yes, yes, yes, he's with me. The Lord is with me. I hope he's with you, but I know he's with me. The Lord is with me. He's been with me a long time. He's been with me for 56 years. All of my life, the Lord has been... can I get a witness in here right now? Sit down, I'm just talking to you. Now, my heart went out to Paul. He's already been through a lot, and the Lord is using the ship to get him into his destiny. And then, the thing he was counting on, riding on, protected by, started coming apart. What do you do when what God gave you to ride in starts coming apart? Do you give up hope? Do you throw up your hands? Do you walk away?

Oh, y'all don't hear what I'm saying. Every blessing is not meant to last the journey. God brings some people in your life to get you from point A to point B. Oh, God, help me this morning. And if you're not careful, you will get to point B, and instead of going to point C, you'll stop and try to preserve what you had, not understanding that God's got something else to carry you the rest of the way. I'm saying that just because the ship comes apart, doesn't mean you have to come apart.

The boat did not retain its original form. The boat did not retain its original form. And I'm gonna zero in, I'm gonna put a arrow right in the heart of many of your problems. You're in love with what you had. I'mma try on them: You're in love with what you had. And you think that if your life does not retain the shape that you started with, you don't think that it can get you where you're going. See, the boat didn't cease to exist. It just took on another form. It wasn't as comfortable, it wasn't as glorious, but the Bible said even when life takes on another form and it's all broken into a piece, grab a piece of what you got left and hold on. And the Bible says some on boards and some on broken pieces made it safely to the other side.

I have learned that every blessing doesn't come to stay. Every relationship wasn't meant to last. Every friend is not gonna be a lifelong friend. God will send people in your life for a season 'cause you needed that at that time in your life. And if they walk away don't stand there at the tomb of what used to be and cry over what was 'cause if you'd have needed them for the future, they would have stay. All that left me couldn't stay and all that stayed couldn't leave. To God be the glory for the things he has done. I feel like having some church in here.

So sit down, I'm just talking to you. So the brother in "The Life of Pi," he says, "I survived the storm. I survived the pestilence. I survived almost starving to death. I survived the tiger. I survived almost losing my mind". He said, "And when I finally got there," he said, "I held on to the boat. I was afraid that I would get that close to deliverance and die in shallow water". What is the thing that makes us fearful in safe places? Fearful in safe places. Why is he clutching on to the boat in 2 feet of water? What do you do when your senses are lying to you? When you live in a realm of thinking that you're going to crash but you're not, thinking that you can't make it but you can, thinking that you're in danger but you're safe. I'm talking about exhausted emotions.

If we ever get this house paid for, we're gonna shout the victory. If we ever get these kids raised, we're just gonna dance and shout. If I ever get this bill paid off, I'm gonna shout the victory. If you ever get over this cancer, we're gonna go out and celebrate. If we survive this leukemia, we're gonna run up and down the aisle. But do you not know that statistics say that most marriages who have gone through catastrophic incidents fall apart after they survived it? Because they're tired. It's called compassion fatigue. Compassion fatigue. I gave out, I wore out. We made it but I was exhausted. Wore my party out of me. Wore the smile off my face. Wore the step out of my walk. What does that mean? I could succeed, I could survive, and not feel successful. What happens when you get there and it doesn't feel like what you thought "there" would feel like?

Oh, no shouting now. Oh, it got kind of quiet now. Why doesn't Paul dance? He could have died in the storm. He could have gone down with the ship. He could have drowned in the water. He makes it to Melita and collapses on the shore. What do you do when survival does not feel successful? When the mission completed does not make you wanna celebrate? Is it that you underestimated how much it would cost you to get where you are? Is it that you have denied yourself the right to have survived and still be exhausted? There is nothing wrong with being tired.

Don't you know you can't trust how you feel? When you're tired, your feelings are off, your emotions are crazy, you get angry about stuff that's not important, you snap at people who are trying to be nice to you. When you are tired, you cannot live uppon your own counsel. If you listen at your own counsel, you will give up in 2 feet of water. And the Lord told me to warn you: keep on flying but don't read the dial. Keep on stroking even when you feel like I'm scared to death. You may be scared to death but you're closer now than you've ever been in your life. I said you're closer now than you've ever been in your life. It doesn't feel like what you think it would feel like.

See, the problem with the church is we have bought into these mystical magical things where people come up and lay hands on you and give you a double portion of their spirit and they confer blessings on you and they confer the anointing on you. Let me tell you something. Most of that is garbage. You wanna get my anointing? Suffer like I suffered. Cry like I cried. Do without like I did without. Crawl with dirt in your fingernails. By time you get through bleating and crying and suffering and you finally get there, it's not gon' feel like what you thought it would feel like because along the journey, it cost you so much to get there that success doesn't feel successful. Survival doesn't make you wanna celebrate. Paul made it to the shore but he was almost dead.

Who am I preaching to? You got all kind of people who wish they could be you. Say, "If I could only have his situation. Oh, you got your own law practice. Oh, you got your degree. Oh, you married a man with a degree". People have all kind of ideas of what it feels like to be you, but they don't know that you're out of breath and about to pass out and at your wit's end and scared to death and at the end of your rope. But touch three people and say, "Hold on. Hold on. Hold on".

You didn't come through everything you've been through to die in 2 feet of water. You didn't survive the storm and the pestilence to get here and let this little problem get you down. The devil is a liar. The devil is a liar. You don't even have to be able to swim to survive in 2 feet of water. All you gotta do is be able to stand up and if you can stand up, you can survive in shallow water.

Dr. James, there's one other little point. I have a very active imagination and sometimes it works for me, sometimes it works against me. And in my mind, I thought that when Paul got to Melita that he got up and built a fire. I just imagined in my mind that once he survived and he was cold and he was wet and he was tired, I imagined in my mind that he got him some wood and built him a fire. But when I read it over again, I found out something, that when Paul made it to Melita he did not build his own fire.

When you survive a series of storms, life is a storm, everything you touch is a storm, it'll cost you something to go through anything you gotta go through, but when you finally get there, don't build your own fire. The Bible says, hallelujah, not only did Paul not build the fire, none of the people who were with him built the fire because when you're tired and I'm tired, neither one of us have the strength to build the fire, but God sent somebody who hadn't been through what he'd been through to build the first fire. And the Lord told me to tell you to hang around somebody that's got dry wood, hang around somebody that loves you enough to build you a fire. Hang around somebody that can take care of you when you're exhausted. You don't have to build your own fire. Ha-hey! Ask your neighbor, "You got any wood"?