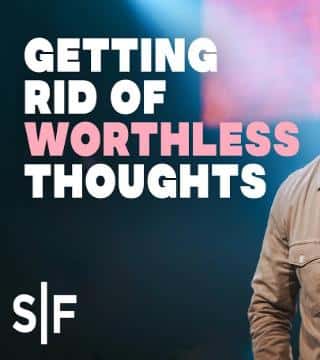 I believe God wants to give somebody permission to copy the original, permission to do it differently. God is sick of your excuses. He is. He told me to tell you. He didn't say it mean like that. He said, "Tell them they have…" Does your God talk in a British accent or is that just the guy on the Bible app? God said, "I am trying to give you permission to break the pattern of the Pharisees to separate the chaff from the wheat". See, the chaff is the tradition. The kernel is the truth. The kernel is the seed the grain comes from. The husk… Do you know what the husk is around the kernel? I didn't grow up on a farm either, but I just studied this this week. The reason they were harvesting by hand… This is why the Pharisees were accusing them, because they said, "That's threshing. Technically, that's threshing. You're separating the husk from the kernel, and you're not allowed to do that on the Sabbath, because technically you're doing work. Now you can pick the grain with your hand, but you can't thresh it…not on the Sabbath".

The disciples are giving a demonstration of what Jesus is doing on the earth. He is rubbing away the husk of what is not working. He is rubbing away the husk of everything that did not come from his heart. For some of you, he is rubbing away the husk of the house you grew up in, of the habits you have developed, of everything that is keeping you from discovering the kernel. I started studying about kernels, and I found out something. I found out that kernel also means, in computer programming, what is at the core of a computer's operating system and has complete control over everything in the system. So, when it says they rubbed away the husk and kept the kernel… The Lord said for me to tell you "Keep the kernel". Some things have to fall away for you to get to what's true. Sometimes that doesn't happen in a harvest field. Sometimes that happens in your mind, in your habits, in your prayer life, in your devotion.

In a computer program, the kernel is the operating system, and it has control over everything in the system. So Jesus said, "There's a new kernel in town. This system is broken". Jesus Christ… We talk about Jesus, and we sing about Jesus, but I wonder if we really understand what we have inside of us to say, "Christ in you, the hope of glory". It means no amount of husk, no amount of habits, nothing that has been covering you… Because when God does this… Do you know what I love about God? He threshes by hand. I love God because he threshes by hand. He knows exactly what needs to fall off my life. He knows exactly who needs to fall out of my life. Somebody thank God for the breakup. Somebody thank God for the pink slip. Somebody thank God for the relocation. That's God getting ready to bless you, and everything that doesn't come from him is going to fall off. It's going to fall off. Work the kernel. Even on the Sabbath, even if you've been in a bad situation, there is a kernel of the goodness of God.

The kernel doesn't look like much, but everything that is going to be in the grain is in the kernel. It just hasn't come to maturity yet. The kingdom of God is like that kernel. So, God is in the business of removing some things. He said, "Did you never read what David did"? How hard would it be to be David? The only king you've ever seen is bipolar. He really was. They didn't diagnose it like that at the time. They said an evil spirit from the Lord came upon Saul. Not only was it a mental disorder; it was a spiritual warfare. That's what David grew up seeing as king. So he had to make a decision, and so do you. "Am I going to copy Saul or copy God"? He had opportunity after opportunity after opportunity to get revenge on Saul. One time Saul was (this is really gross, y'all, but it's in the Bible) relieving himself in the cave, and David got so close to him he cut off a corner of his robe. He could have killed him. He had a decision to make. "Am I going to copy Saul and continue to sow the same kernels of conflict that made him crazy"?

See, God chose David because he said, "I want a man after my own heart. I want a woman who will copy me, who will learn from me". To be discipled by Jesus means more than wearing a bracelet of "WWJD"? It really means you have to allow him to do what he didn't stop the disciples from doing: to separate the husk from the heart. There were certain seasons in my life where I owe the Devil an apology for giving him credit for something Jesus Christ was actually doing. All I felt was this. All I felt was threshing, and I'm like, "O God, I'm losing this person, and I'm losing this thing, and I'm losing this opportunity". That was God threshing my life by hand. That was God. Aren't you glad he doesn't just use a sickle and thresh you like he threshes everybody else? Just come on through and make a row. God loves you enough to thresh you by hand so he can get to the kernel, the kernel of the prophetic word he has spoken over your life, the kernel of your true beauty unadorned, the kernel of who you really were all along before all of the layers of 39 categories of what God can't do got on top of you.

God is threshing all that away now in Luke, chapter 6, and the nets are breaking, and the roof is breaking, and the wineskins are breaking, and the Sabbath is being broken because it has become a prison when it was meant to be a gift. God is breaking you out. That's what all this has been about. Quit giving a praise service to the Devil by telling everybody you're under attack. You're not under attack. It's not a threat; it's a threshing. What happens after the threshing depends on whose hands you're in. When God does this, you do this. "I'm excited. I'm getting ready to see God reveal something in me that I forgot was even there. I'm getting ready to see God do Ephesians 3:20". I wish you'd participate in this sermon and just do what God has been doing. Just do this. "Oh, I can't wait to see what God has in mind. I'm filling my horn with oil. I mean fresh oil. I'm filling it to the top, running over. I'm getting my joy back. It's reaping time now. God has been taking the husk off my heart and the husk off my mind, and God has been shedding me of wrong thinking. Now I'm getting ready to see what God put inside of me".

By the time it says in Acts 13 that David was a man after God's own heart, it doesn't mean all of his decisions were perfect. It means he kept the kernel of God's heart. The Enemy wants to wrap you in so much condemnation you can't see the kernel. That's why God brought you here today. That's why he has been allowing you to go through… I don't think it probably felt good for the grain, but it was good. He is removing everything that does not belong and breaking everything that is holding back the purpose he created you for to get you out of that prison, to uncover the kernel of your true character. He will even allow life sometimes to do this to you. Sometimes it doesn't feel so gentle, and sometimes we don't know how to praise God for this.

I want you to rub your hands together real quick. You can still do this on COVID protocol. You don't have to rub somebody else's palm. I want you to hear the Lord saying, "The fields are ripe now. I'm bringing you into a moment where you can grow up past what you grew up around, to establish a different pattern, to break tradition with the things that are not true about you".

Lord, we pray for release for the captives today. Some people are captive by the customs of their life, and some people are captives in a certain area of their character, but I see something coming forth today by faith. I really do. I believe you have been unlocking as I preached this word today. You literally have been walking through the grain field. I thank you, Lord, that when you walk through the grain field of my life, you know how to take the husk off. I thank you, Lord, for everything you have spoken over her life, over his life. Thank you for everything you've planted in them, the experiences, the wisdom, the gift you've given. We will not allow the lies of the Enemy or the patterns of Saul to keep the king in them from being born.

So, Father, I thank you now in Jesus' name. Not David's name…in Jesus' name, the Lord of the Sabbath, the Lord of the gift, the God of the grain field. I commit them into your hands. It's not the spear that was in Saul's hand. God, it is the grain in your hand that gives me confidence and faith today to know we'll make it. This may be a word, God, that needs to go down deep for somebody. They may need to hear it another time or two to really get it down deep, but I thank you that your hand has been there keeping the kernel of their purpose, keeping the kernel of their life, and nothing anyone does can change it. Father, our hands are open. Our lives are yours.