Steven Furtick - Let Go Of What You Can't Control 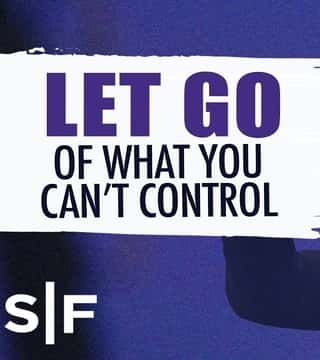 Here's the thing I found out. I found out it really doesn't matter who causes it. If it's from God or if it's not from God... I don't really know the difference sometimes. What I know is that whatever happens in our lives, it has to pass through his hands. So whether it came from his hand or whether it was from the Enemy is not the most consequential thing. The most consequential thing is whether I will partner with what God is doing even if it's not what I prefer. Will I resist it or will I push against it or will I go with it?

The Israelites are being set free from Pharaoh, and just about the time freedom is in sight, just about the time it looks like they're going to make it to this land flowing with milk and honey, the land of the Canaanites and Perizzites and Hittites and Jebusites and "cellulites" and all of these enemies we have to fight in this modern... That's a real enemy: the cellulites. Some of y'all are fighting the virus of overeating right now. But listen to what happened when they got there. Pharaoh changed his mind and said, "What have we done"? Listen to verse 5. "We have let the Israelites go and have lost their services"! "So he had his chariot made ready and took his army with him. He took six hundred of the best chariots"...

The Enemy uses the heaviest artillery on the people who are carrying the greatest purpose. If a lot is coming against you, that means God has put a lot in you. One of the things God is showing us in this season is what he put in us. And do you know how he's doing that? By shutting down everything around us, because sometimes the only way for you to see what is within you is that everything that is not within you... I'll put it like this. When I preach to a crowd, I sometimes get carried by their energy, but when I'm preaching and there are only three people in the room... Something different has to kick in. Sometimes the Lord allows something around us to shut down, to die, so that something within us can come alive.

Pharaoh said, "I changed my mind about letting them go". The message today is called A Lesson in Letting Go. There's so much we're learning right now. We may not know we've learned it until way on the other side of it. You don't really realize life lessons until later. You know that, right? It's later that you say, "Oh, it was good for me that I was afflicted, because this taught me that. Oh, it's good for me that they told me no, because I didn't want to date them anyway. If I would have married them, I would be in therapy right now". A lot of times, it's later that we see the lessons. Now we can read about Exodus 14. You know, the children of Israel. "Wow. They should have trusted God through the Red Sea. God was going to make a way".

It's easy to say that on the other side of it. It's so easy to look back and say, "Well, he made a way where there was no way," but that's when you're looking back. What really takes faith is to look forward at something and to believe he's going to make a way when you can't see it. A lesson in letting go. God told Moses from the beginning that freedom is not going to come easily. Certain freedoms in our lives have to be forced. That sounds bad, but it's true. The only way God sets us free from certain things is he has to take them away. Sometimes what God allows to be removed from our lives is just as important as what he allows to be brought into our lives, yet this is a season where a lot of us are having to learn to appreciate things.

Remember what I said last week? The things you were complaining about in February you would be praising God for in April...all of the annoying people. You just wish you could have a different cast of characters than the four you're stuck inside with. I figured out how much people are saying they're finding a rhythm in quarantine is dependent on how big their house is. It's like, "Oh yeah, man! This is kind of cool". Or how grown their kids are. Or for some people, it's whether they have any human interaction. So, I've been thinking a little bit about the fact that a lot of times in my life the lesson God is teaching me is to appreciate something. Here's what I want to ask you: What is God teaching you to appreciate in this season? Very simple but maybe worth some reflection. I'm going to wait for you to respond.

You say, "Well, God is teaching me to appreciate my livelihood. Honestly, I had gotten so caught up in what I didn't like about my job I forgot the fact that having one is a blessing I can't take for granted". Sometimes the only way God gets us to appreciate something is to allow it to leave for a little while. That doesn't mean this global pandemic is a plague sent by God, but I think God can use it to teach us to appreciate some things. Don't you? I wish they would let us get back in this church and sing "Rattle". I wish they would. I'm telling you, the first time Elevation Church gets to come back and sing "Rattle" in person... I've been watching y'all online. Y'all are losing your minds online.

When we get in a building and sing it, you'd better wear a motorcycle helmet. I wish they would let us get back together. Man, we're going to really have a good time, but you know what? The very same thing we long for today is something we had been living in for so long that God is teaching me to appreciate some things. He's teaching me to appreciate some things I had become so accustomed to, used to. You get used to the things God gives you to the point that you can become used to the people God gives you. You can get used to simple moments. Things that used to be annoying you learn to appreciate.

One of the things that's happening in this season for all of us is God is not only teaching us to appreciate certain blessings, but he is resetting the baseline of what we consider a blessing. The Bible says, "Let everything that hath [a new car] praise the Lord". "Let everything that hath [perfect circumstance] praise the Lord". Sorry, it has been a while. Maybe I'm rusty on the Scriptures. "Let everything that hath breath"... That's the new baseline for being grateful. Before God gives us a new blessing, he wants to give us a new baseline. Did you just breathe? Praise him. Are you still here? Praise him. Did he wake you up? Praise him. Did he sustain you? You might not like the taste of manna, but if you have something to eat, praise him. You might not like who you're sitting next to on the couch, but praise him that you have somebody to sit next to. Grab that hand and squeeze it and say, "If you have a pulse, praise him. If you have breath, if he gave you another day"...

Honestly, certain sermon ideas come to me when my body is moving, so I try to incorporate the two. But I had this flashback the other day from when... I guess about three years ago, my elbow started hurting all the time, and Chunks said, "That's called golfer's elbow". He used to be a physical therapist, so I'm like, "I know you went to school for this crap, but I've never played golf, so you're going to have to explain to me how I got golfer's elbow". I played golf twice in my life with my dad after he had a six-pack of beer, and neither time did we finish the nine holes because it went so badly. "I have never, ever in my life played golf as a grown man, so you explain to me how I have golfer's elbow". Is it golfer's elbow? Yeah. I can never remember. There's tennis elbow and golfer's elbow, and one is one thing and one is the other, but the thing I wanted to say to you was my elbow hurt. I told him my elbow was hurting because I had been lifting too heavy.

Isn't that a man's way of explaining things? "The problem is I've just been lifting too much weights. It's these 95-pound dumbbells. I've just been pushing myself too hard". He said politely, because I pay him, so he has to say this a certain way... He said, "Actually, it's not the amount of weight that caused the injury. It's not how much weight you were lifting; it's how hard you were gripping it". I'm coming for the control freaks. I'm coming for the people who even when you pray for your kids, you're not really praying; you're just giving God a punch list of ways to make them not in his image but yours.

I'm coming for everybody who had a plan for this first part of the year, and now you can't really find your rhythm. You can't find your groove. It's understandable, and it's completely normal. What Chunks told me... This is so powerful, and I'm going to say it way better than he said it, but this is how I heard it. I heard him say, "You could lift a lot more if you will loosen your grip". You can lift a lot more... God said, "If you'll hold it differently, you can handle it". So here's what I'm noticing. If I take it day by day or hour by hour or moment by moment, I'm good. It's only when I get too far out or too far back... Either one is a mistake. I can handle Sunday on Sunday, but I can't handle Saturday on Sunday, and I can't handle Monday on Sunday. This is the day the Lord has made.

Forgetting what is behind... I can't fix that. I have a grip on something behind me, and I can't go toward what God has put in front of me. But I press toward the mark for the prize of the high calling. God said, "You can get there if you let go". Let go. Oh man! That preaches so good. Why is it so hard to do? "Let go and let God". "Uh-huh. Are you going to pay my light bill"? "No, but let go and let God". "Well, God didn't offer me a rent check". "I know, brother, but let go and let God". I don't think it's really about letting go of your responsibilities. It's about releasing the things you could never control to begin with. All God is doing in some of our lives in this season is showing us how little control we had to begin with.