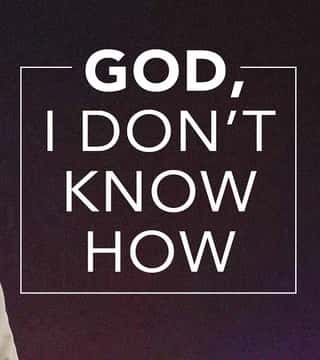 I see a lot of Christians listening to cute sermons, and we're telling you to do things that sound really big, to forgive people and to be free of addiction, but I hear the response from the people. When the pulpit is echoing forth these lofty ideals, the people are sitting in the pews saying, "How? You're telling me what, but you're not telling me how. I don't know how". "I don't know how to read my Bible. I don't know how to pray for over 13 seconds without thinking about my need for cereal at the grocery store". Somebody try it. "I don't know how". That's the most spiritual thing you've said all week. Who did God pick to be the disciples of Jesus? Religious professionals with academic know-how? Who did God pick to carry his Son? What's the first thing Mary said when the angel said, "The one born of you is the Holy One of God"? "How"?

How many don't know how? Just see who I'm preaching to and who I can leave alone. "I don't know how". "I don't know how to forgive somebody but then make sure I keep an appropriate distance so they don't continue to violate me. I don't know how". Here's a farmer who doesn't know how to make a seed grow, and Jesus says, "It's like that". Growth is like that. There's a part you will play, and you will know what to do. You sow, you water, you plow, but you don't have to know how. This is the dirty little secret of the kingdom they don't want me to tell you. They want you to think God chooses and uses and blesses people who are experts and who are the epitome of perfection, but I want to tell you who God is looking for: fishermen like Peter, prostitutes like Rahab, people who don't know how. That's what God is looking for: humble people.

"Blessed are those who hunger and thirst for righteousness". Not those who are so full of their own wisdom they cannot receive the wisdom of God. If you came here today with an "I don't know how" heart, God can fill what you will empty before him. I don't have to know how it works. If I did I'd still be at the house, because I drove my Maxima here. I have no idea how that button told my tires to spin. I have a little bit of a concept, but not much. I found out something about my car that I found out about God. I found out I don't have to understand it... See, it got me from here to there and from there to here, and here I am preaching, but honestly, I don't know how. I have an iPad. I put my notes on my iPad. I turn on my iPad. The notes appear on my iPad. I preach to you. I understand what button to push. I push it. I know what letters to type. I type them. But as to how the words appeared on the iPad, I don't know how. It didn't stop me from preaching. It didn't stop it from working.

As much as I want to preach theologically right now, I just want to minister to you personally. Let the dirt do its work. The greatest growth happened not when the farmer was doing his part but when the dirt was doing its part. There's a cooperation that happens in each of our lives that's between the things we can control... I can plow, I can water, and I can sow. I can speak words of encouragement. I can speak words of life. I can invest my resources into the kingdom of God. I can do all of that, but the part that produces the fruit is not attributed to the farmer in the passage. I think we fall into an extreme where we either think it's all about what we know or it's all about what God does.

In the passage, the farmer scatters, but the soil produces. The dirty little secret (if I can use that phrase) of the kingdom of God that Jesus is comparing to a seed is that your destiny will be revealed in the dirt. What do I mean? The disappointment, the insecurity, the rejection, and the trouble. Check it out. It spells dirt. The disappointment, the insecurity, the rejection, and the trouble. This would be an excellent lesson on its own because it illustrates principles that will apply to any area of our lives. Right here we could tell you to make lemonade out of lemons. Right here we could tell you it doesn't matter how many times you fall down. You know, get knocked down nine, get up ten. We could say anything we want right here, and the principle would be powerful. But this is not a principle; this is a parable.

A parable is a picture that appears simple on the surface but carries a deeper meaning. When I read the passage two years ago, I thought the farmer was Jesus and the seed was the Word of God. The problem with this interpretation of the parable, upon further reflection and study, is that Jesus can't be the farmer because the farmer doesn't know how. Jesus is the wisdom of God. So to compare Jesus to the farmer who scatters the seed is to miss the parable that is beneath the principle. The principle is "Don't let what you don't know stop you from sowing," but the parable, the picture Jesus is painting is of something that hasn't happened yet. Everyone around him in his inner circle, which he has just selected in Mark, chapter 3... Everyone around him is trying their best to keep him from going to the cross. For him to go to the cross means the death of the movement he came to initiate, in their eyes.

So when he stood before the judges, both the Jewish Sanhedrin and the Roman government prelates, he was silent as a sheep before the shearers. Everything in those disciples wanted to see Jesus come down from the cross to avoid being buried in the grave, but Jesus stood before Pilate and allowed those accusations to be heaped on him, although he was innocent, because he knew the dirt had a purpose to fulfill. As he stood before those who accused him, condemned him, and sentenced him to die, he could have stopped it, and he could have called for legions of angels to come and rescue him from the rejection, but this is what he came for. He said with his silence something that is illustrated in the parable. He said, "Let the dirt do its work, because if they accuse me, then my Father in heaven doesn't have to accuse you. I'm going to take your accusations and your shame. I, the innocent, am going to absorb your punishment so that you, the guilty, can go free".

So when they heaped their accusations on him, he took it. When he died on the cross and they took him down and buried him in the grave, he did not resist the burial. Instead, he stayed dead three days to let the dirt do its work. We thought we were attending a funeral, but really it was an agricultural lesson. Jesus was not buried on Friday; he was planted. Because he was planted on Friday, there is the expectation of harvest. He is the firstborn among many brethren. When he lay in the grave it wasn't over; it was just beginning.

I came to declare today to everybody who's been going through a season of failure or depression or uncertainty or rejection or disappointment, "Let the dirt do its work". Don't fight it, don't run from it, and don't pluck up the seed because you don't like the season. Let the dirt do its work. This is the gospel of Jesus Christ. This is what the kingdom of God is like. There's nothing man can do to you that God cannot use for his good. I believe that. I believe that all things work together for the good of them that love the Lord and are called according to his purpose, but I don't always know how. But I don't have to know how, because I know who.