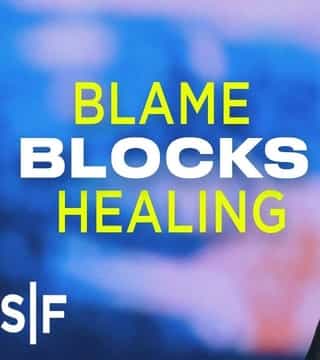 "What's wrong with me"? Have you said that a lot lately? "What's wrong with me that nobody wants to be with me? Why doesn't anybody stay in my life? Why doesn't anybody want to be around me? Why don't the things that happen for other people so easily happen to me? Why can't I be happy like they're over there so happy"? That's not God. This is. Why is the Enemy's primary strategy accusation? Because if he can keep you doing this, you'll never do this. Here's how resentment works.

Paul in this moment could have gone, "This is so stupid that I'm on this island. This is so stupid that the fire... Nobody else got bit by a snake". I mean, think about what Paul could have said in his heart. All of these other prisoners... "God must be punishing me. That's what everybody else is saying. Maybe they're right". I went through a season in ministry where so many people were saying a certain thing about me I started to act like I had to prove them wrong. So a lot of my ministry, if I look back through a certain season, was me up here being like, "I do study my Bible... in the Greek, in the Hebrew, in the Pig Latin"... I'm busting out every language I ever learned...hieroglyphics...just to get you to see I'm not what you think I am. "He's an entertainer".

But when I looked deeper, it wasn't what they were saying that had the power to contain me, control me, or limit me in my ministry effectiveness or humanity. It was "Will you do what Paul did? Will you do this"? Because when you do this, now you can do this. Pointing fingers or healing hands. They're watching him so closely. They're going, "Let's see if he gets better". I don't think Paul really cared much about the audience at this point, because he knew he had an appointment in Rome. His security and his purpose made him impervious to the opinions of others. Did you catch what God just said to you? There is a sense in which when you know God's hand is on you, when you know it's God's hand... Even in the mistakes. Even in the decisions of others.

This is what takes us some time to believe: God is sovereign even over the screwups of others. Let me get to the good part. I preached about that a few weeks ago, so let me get to the good part. The people thought he was going to die. He didn't. Nothing unusual happened to him. They changed their minds and said he was a god. Paul knew he was neither. "I'm not a murderer. I'm not a god". I wrote a song lyric the other day. "I'm no beggar. I'm no king. Guess I'm something in between". I want to put that in a song one day. Maybe I will. But I was reading how they were like, "He's a god. He's a murderer". He's like, "I'm neither. I know who I am. God told me who I was". Acts 27. "Before I even went through the storm, God told me who I was. So, I'm not looking to you to define me now that I'm on this shore called Malta. I don't even know you like that".

Watch this in Acts 27:23. This is anointed. "Last night an angel of the God to whom I belong", there it is, "and whom I serve stood beside me and said, 'Do not be afraid, Paul. You must stand trial before Caesar'", you have a case in Rome, "and God has graciously given you the lives of all who sail with you". But Paul wasn't busy doing this, because if he blamed those who were responsible for shipwrecking him on this island, he would never see what God wanted to do on the island while he was there. It set me free. There's no power in this. When you place blame, you give power. If they put you in the situation, they have to get you out.

So when Paul does this, it's his way of saying, "It's not whose fault it was that matters. It's not what you think about me that matters. The only thing that matters in this moment in this season of my life is this". "Get that fellow over here, the one the snake bit and he didn't die. I want to meet him". Publius didn't ask for any other prisoners. Just the one who got bit and didn't get bitter. I'm not just being cute. I would have been bitter. I would have been like this. "You told me to preach. You told me to share the gospel. You said you would protect me, and I'm the only one who got bit". But this won't get you healed either. You can do it. God's not scared of it. You can do it. It's fine. But when you get done with that, are you ever going to get to this?

In a marriage, I promise you, one thing I know. This heals; this kills. I'm just trying to help you see something. This kills. It kills communication. It kills empathy. This heals. I just saw it like a picture. This is only going to get you to a certain place. And it's important. All of us can point to something in our lives right now that is making us weak, and that's fine. That's totally fine for the snake to fasten itself to your hand. It's not okay for you to hold on to it longer than you're supposed to. We can all point to something in our past that caused the way we're struggling with a character defect today, and that's fine. It only gets you so far. The real question when Paul shows up and gets in Publius' house and discovers there's an opportunity...

Remember I said a Christian opportunist? A worldly opportunist is when I see something that looks like a good opportunity, I give my all to it. When I see somebody who I think can give me an advantage, I'm nice to them. That's a worldly opportunist. A Christian opportunist realizes the great strengths hide in weakness. A whole island gets healed because of a sick man. The sick man only encountered the great apostle because of a snake-bitten hand. Let me make sure you see the connection. Why did the snake bite Paul? The fire. It doesn't say God made the snake bite Paul. Paul determined after the fact that he would use this too.

Have you ever hit a wall? I've hurt my knuckles hitting inanimate objects. Paul didn't punch the wood. A lot of us go around, physically speaking, swinging at stuff that can't swing back. Oh, it's the government. Oh, it's this, it's that. This is only going to get me so far. I've got to do this. I've got to go have dinner with Publius and see why God put me on this island that wasn't on my itinerary. God said that some of you are going today from a posture of pain to a posture of power, but it's going to be a different kind of power. It's going to be a 2 Corinthians 4 kind of power. In 2 Corinthians 4, the great apostle Paul says, "But we have this treasure in earthen vessels".

I'm going to do a sermon maybe after Easter called "You're Underthinking It". Everybody says, "I overthink things". No, you underthink things. You only process stuff at the level of your thought, never at the level of your spirit. He did something so simple. He prayed, because he knew he couldn't give any healing to Publius' father if he had venom in his own vessel. As we picture this, I want you to picture yourself in this season of your life. Here you are. "I should be here. I should be there". Pointing at where you should be will not result in progress or peace. We could all do that. "I thought I'd be... I should have been... If they wouldn't have, then I would have". Pointing with both hands.

But watch this. After he prayed... I want you to see yourself doing this when I say it. Paul went in and placed his hands... Not just the good hand, the hurt hand too. Does this give you a picture of what God wants to do through what you've been through? If it said, "Paul put his hand on him," I'd think, "Well, that's nice". But when I realize a snake had been on that hand just a few days ago, I think to myself, "God, what do you want to do through the places where I've been hurt"?

Do you want this or are you ready for this now? I see a hand opening up, but it's not God's hand. His hand has always been on you. In every valley you've walked in, in every dumb decision you've made, in every bad thing you've ever believed about yourself and every bad thing anybody has ever done to you, his hand has always been there. It has never been the question about his hand. How about yours? Are you going to walk around with that snake for another year, another five, another decade? Are you going to be an old man running around telling snake stories? With the same hand that could have killed him, he became an instrument of revival.

The reason I didn't name my sermon when I started is because you don't always know what to call it until after it's over. Malta was called honey, but God brought Paul there for healing. Malta means refuge, but God brought Paul there for revival. I want us to spend some time believing today that when we do this... See, you can't do this and this. So which one is it going to be? Until you do this, you can't do this. Somebody I'm preaching to, if you can't do this for yourself, do it for your kids. The whole island got healed because Paul didn't do this. When you do this to yourself, when you do it to an event... When you allow your identity to be consumed by an experience, it will always limit the flow of God's power in your situation. So, today, God sent me with a word for somebody to just know that life begins when you do this.