Steven Furtick - When You're In a Fight With the Devil 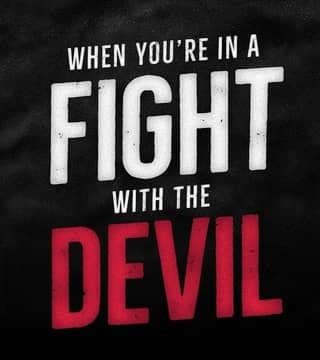 A lot of us stop at the tomb, where our hope dies, where our disappointment in what we thought was going to happen gets so deep in our heart that we no longer want to try, believe, pray. We may go through the motions, but our heart isn't really in it. But look what comes next, okay? Because I think it's so important that you don't let fear decide how your story ends. I think that is so important. And I feel so anointed to tell you that. Do not let fear dictate where your story ends, where your praise ends, where your gratitude ends, where your trust ends. Don't let fear have the final word in your story when you've already been in Sunday and you know that he has risen. Here's what happens on Sunday, and I really am going to tell you this time, okay? Who was the first person that Jesus showed himself to when he rose from the dead? Do you know? Yeah.

Okay, don't tell them. "When Jesus"... This is March 16:9. "When Jesus rose early on the first day of the week, he appeared first"... Not Warren Buffett, not Peter, not even Lady Gaga, not even Jay Z, not even a pop star, not even a professional athlete, not even a preacher. He appeared first to Mary Magdalene. That's not her last name, by the way. That's where she was from. She is from Magdala. She was identified by where she was from. She was wealthy. The gospels mention her 12 times. She supported the ministry of Jesus. She was one of the women who made the ministry go forward, and he appeared first to Mary Magdalene out of whom he had driven seven demons. Wow. He did a lot for this woman. She did a lot for him. She financed part of his ministry, Antiquity tells us, but what she did for him did not compare to what he did for her.

Hey, maybe God doesn't love people less because they have more wrong with them. Maybe the more demons you have for him to get rid of, the more opportunity it is for him to show up in your life. How many y'all got a little demon in your mind keeping you up at night, a little demon in your pantry tempting you to eat carbs, and then more carbs and more carbs. Some of y'all got carbohydrate demons, kids demons, every kind of demon. But the thing about it is he knew what to do. He had all authority, and the first person he went to was Mary Magdalene. And I wondered why when I read the text. Why? I know you know who he appeared to first. Do you know why? I didn't. I think I have an idea. This is what I want to show you, okay? Because when I was reading this today, I had such a moment of realizing what it takes to have the kind of faith that can look at fear and can stand in uncertainty. Because it said, look at this in verse 10, "She went and told those who had been with him". "She went and told those who had been with him".

And look at verse 11. "When they heard that Jesus was alive and that she had seen him," they jumped up and down. No? They ran. They ran to see if they could find him in the last spot where he appeared. No? They began to speak in tongues. No, they did not believe it when they heard that Jesus was alive. How do you not believe it? She's telling you! She is telling you she saw him and he told you he was going to do it, and yet it is so easy, isn't it, to quote God's promises until we face a life circumstance that contradicts them? You know, I bet I hear LJ back through the curtain. I'm preaching good now. I wish he had an organ over there. We'll get that Sunday. But we could quote back and forth. We get out of church. God is good! And all the time! You know how cute that is until you get in a fight with the devil and he gouged both of your eyes, and you can't see your way straight, and you don't feel God's presence, and your wifi starts buffering while you're trying to watch Elevation Church Good Friday on YouTube? I mean, even just the littlest thing, and it just disrupts the flow of our faith and puts us back into fear or frustration. At least that's how it is for me.

So the question is, why did Mary Magdalene get to be the first witness of the resurrection? And I want to show you something I saw, but in order to understand what she saw on Sunday, we got to flashback to Friday, which is where we are right now. Which is where many in the world are with this global pandemic, whether it's affecting you personally or whether you're just feeling the frequency of the atmosphere of fear that is all around us. Whether it's already cost you your business or your job or it might, or whether you've been working long hours as a first responder, this message is for somebody who's in a Friday. Make no mistake. The death of Jesus was not just a metaphor. He physically died. When he died, the punishment of our sins was upon him. By his stripes, we are healed. God made him who knew no sin to become sin for us, that we might become the righteousness of God.

That's the gospel. That's why he died. He came to die, and why he died was to set us free from our sin. But I want to show you something very significant about after he died, and this is why I believe that Mary got to see him first. And I believe this is the people that are going to see Jesus in the greatest way this Easter. See him move in your life, in your sanity, in your planning, in your strategy, just see him move right there in your home, experience peace with your kids. I believe this is who is going to experience resurrection power, okay? And the question I want to ask you is, are you expecting resurrection? And yet what I want to show you is going to help us to see what the first step is to expecting resurrection. Now, look at Mark chapter 15 and go to verse 46. And Holly, read verse 46 and 47 for us.

Holy Furtick: "So Joseph brought some linen cloth, took down the body, wrapped it in the linen, and placed it in a tomb cut out of a rock. Then he rolled a stone against the entrance of the tomb. Mary Magdalene"...

Holy Furtick: "And Mary, the mother of Joseph, saw where he was laid".

Steven Furtick: Mary Magdalene saw where he was laid. Mary Magdalene saw where he was laid. So imagine the scene. After he's come down from the cross, as quickly as they can, they do what they can for the body to prepare it for burial. And after they have wrapped him in linen and they placed it in the tomb of Joseph of Arimathea, who let him hold his tomb because he was only going to need it for a short time... Remember, it was borrowed. It was borrowed. That's what we've got to know on Friday, because we've seen Sunday that it was borrowed, that this is not going to stay like this forever, that trouble doesn't last always, that fear doesn't have the final word. And when they had finished wrapping him with linen and they rolled him into the tomb and they rolled the stone back over, guess who was there to see it all? It was Mary Magdalene. And guess who got to see him first when he got up from the dead? It was Mary Magdalene.

It occurs to me that the first one to see the resurrection was the one who accepted his death. And here's what I want to minister to you today. You cannot expect resurrection until you have accepted death. We all want to skip to Sunday. "God, fix it". And everybody has a different "it". "God, fix this addiction. Fix this thing that's going on, maybe even something going on with my finances. God, fix another person. Fix it, fix it, fix it, fix it". But have you really faced it? Because I think the first step to expecting resurrection and God's power and God's healing is to accept that our expectations aren't always going to be met. And I just believe that's a lot of us today. Like, "Oh man, I'm so disappointed".

Do you know how disappointing it would have been that the one whose ministry that you put everything into, you put all your faith, all your belief, and then you watch as they seal him in a tomb? But she was there. And because she faced Friday, she was the first to see him on Sunday. Here's what I mean when I say I have faith in God. I have the faith to face Friday. I don't want the worst things to happen. I don't pray for more problems, but I understand that whatever is happening in my life on Friday, I can face it because of him. I can face it because I don't live from Friday. I live from Sunday.