Steven Furtick - When Jesus Follows You 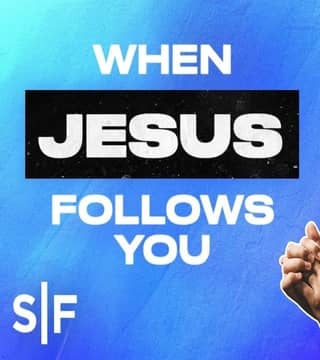 God is not scared to walk right up in the details of your situation. A bird falls out of the sky, and he counts it and puts it on the ledger, and you think he doesn't know about your loneliness, your tears, your heartbreak? Do you think he's intimidated by your skepticism? Do you think your broken heart can chase him away? The Bible says, "A broken and a contrite heart he will not despise". The only heart he can't get into is the one that is closed up through pride, but if you open yourself, even with your face downcast… Cleo said, "Hey, man, are you…"? This is ironic. The host of heaven has come to earth. He died and rose again, lived a perfect life, and Cleo says, "Are you the only one visiting Jerusalem…"?

Remember, he made it. They're treating the God of the world like a guest. This is so funny to me, how we get it twisted, how we get it out of order. We start thinking God needs to consult our blueprint of how our lives need to be built. I can get this way as a pastor, telling God what he needs to do in my church. You get this way as a parent, what God needs to do with your children. Cleopas launches out on this long, long speech, telling Jesus what happened to Jesus. God has a sense of humor, because he lets him talk. Cleopas gives him his speech, and Jesus lets him finish. "Are you the only one who doesn't know what happened"? The one it happened to is standing there, and Cleo wants to tell him what happened. "What had happened was Jesus of Nazareth was a prophet, powerful in word and deed before God and all the people".

They are standing before the great I Am, and they start with "He was". There he is, and they're stuck in "He was". Are you missing what is because you're stuck in what was? "We hoped he was the one, but it took a turn for the worse. The chief priests and our rulers handed him over to be sentenced to death, and they crucified him…" Jesus is nodding. "Tell me all about it". Verse 21: "…but we had hoped…" Had I been Jesus, I would have stopped you right there, because hope that is seen is not hope at all. If you had hoped and don't hope anymore, what you had wasn't real hope, because real hope can hold on, even on Friday. "I had hoped it would be over by now. I had hoped the medicine would fix it. I had hoped they'd say yes. I had hoped they had asked. I had hoped".

Hope is standing in front of hopelessness. Christ and Cleo. The cross clashed with Cleo's expectation, and now his experience has left him downcast. "We had hoped that he was the one". "I thought I would be further along by now. I thought I'd be married by 26. I hoped they would be good to me, pay me back, and appreciate me after all I did for them. I had hoped he was going to redeem me. I had hoped he was going to heal me". Could it be that we miss God because we look for him in the dreams but he is found in the disappointment? Their faces were downcast. Their hopes were dashed. From their standpoint, the story was over. Since I'm your tour guide on this seven-mile journey, let me give you a professional travel tip. Don't judge the journey before it's over. I don't know who that was even for. Don't judge the journey of seven miles when you haven't even been two yet. See what the end will be.

If you trust his promise, you have to trust the path. It might be winding, and it might lead to a cross, and it might not feel good, and it might be confusing, but he is the God of the detour. It might not be spectacular, and he might not prove himself to you with signs you can see or sense or feel, and there might not be a goose bump that proves his presence. He might show up in the details, the little things. It might be in the little ways. He's right there on the road. He's walking with them. They almost can't recognize him because what's happening is so common. He looks like just another guy. They are standing next to resurrection. They don't recognize it, and it's right there. He's right there. He is here now. He is, he was, he is to come, and he's with you in this moment. "We had hoped he was the one. What is more," Cleo says. "To make matters worse…" Look at verse 21. "…it's the third day".

How many of you want to see God active in your life? I mean, with the eyes of your heart, to know him. He can be found at the dead ends, when you used to hope and now it's hard to hope. That's where he meets you on your Emmaus Road. I'm glad they can't find Emmaus, because that means we each get to have our own. That means I get to have my own Emmaus. I'm on my own journey. I'm on my own path, and I'm not alone. I don't even like walking very much. I don't have a Fitbit. Everything about this seems backwards, doesn't it? He spent his whole life telling people, "Follow me," and now he's following them. He has come down out of heaven, and instead of people making their way to God, now God has come to us. He has reversed the search. You weren't even looking for him, and he was looking for you. You weren't even seeking for him, and he was showing himself all along. Cleopas said, "We had hoped he was the one. In addition, some of our women amazed us. They went to the tomb early this morning…"

Wrong place. He's not in the tomb; he's on the road. He's not in religion; he's in relationship. Please help me preach this. I need to know you're receiving it, because God told me some of you are going to come out of tombs of tradition and really experience the presence of God. How many want to experience his presence? You'll find it on the road. "Our women went to the tomb but didn't find his body. They came and told us that they had seen a vision of angels, who said he was alive. Then some of our companions went to the tomb…" This is still Cleo talking, telling Jesus about Jesus, still not recognizing what's right beside him. "Some of our companions went to the tomb and found it just as the women had said, but…" This is the most ironic verse in all of Scripture. "…they did not see Jesus". He is telling Jesus about other people who didn't see Jesus, and he doesn't know it's Jesus.

Have you ever realized how easy it is to judge somebody else's journey and not even recognize what God is doing in your own? Jesus said to them, "How foolish you are, and slow to believe…" That's the problem. Look at me. Every location, watching on television, watching online, I want you to look at me. If you can't look at me, look at the screen. Look at me. It starts in the heart. He said, "You're slow to believe". You keep trying to make sense of things in your life with your head. You keep trying to figure out the reason for what's happening to you, and when you can't figure out the reason, you want to jump off the road. You want to stop following. You want to stop trusting when you can't figure it out, but if you would reverse the search and believe in your heart what you have not yet seen with your eyes and believe the goodness of God, if you would get it in here… This journey doesn't start with making sense. This journey starts with faith.

Have faith in God. He's with me on this road. "Did not the Messiah have to suffer these things and then enter in his glory"? You keep wanting to see the glory, but you're only going to see it in the suffering. He is the God of the detour. He is the God of the detail. He is the God of your dead end, and he has brought you to this moment today. The Spirit of God is in this place. I am preaching out of my mind for somebody who has been on the road. Watch this. "Beginning with Moses and all the Prophets, he explained to them…"

He took it all the way back to show them that the one the prophets had looked forward to was standing right in front of them. "He explained to them what was said in all the Scriptures concerning himself". He broke it down, on the way, on the road. That's where you learn: on the journey. You don't wait until you understand to get started. You grow as you go. You know as you go. Keep walking. Keep walking. Keep walking. You'll understand it better by and by. Give him a chance. Give him a chance to show you who he is. Hold on to his unchanging hand. Trust his heart, even if you can't trace his hand. "God, I don't get this, but I'm going forward". It's a decision.