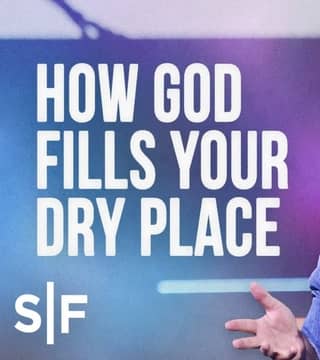 I've come to tell you your best days are not behind you. God is not like that. He didn't let you run out because he left you; he let it run out so he could give you something better than what you brought to the party to begin with. "You flipped the flow". Verse 10: "You have saved the best till now". But how did he do it? How did he do it? Everything you're running out of in your life today is in Jesus. It's in him. There are three things I want to show you, and then we'll go. First, it's not going to be in the places you expect. It's going to be nearby. It's not going to be by you moving to a new situation or thinking your solution is out there somewhere. It's not going to be distant; it's going to be nearby. Verse 6. Where were the stone water jars? Pay attention to the details. Nearby.

Where is the help God has given you for the shortage in your life? It's nearby. The reason we don't see what's nearby is because when something is close we see it as common. These were stone jars made of earth. They were leak-proof so they wouldn't be ceremonially unclean, but there was nothing gold-plated about them. These were not iced-out jars. That's not what made them special. What was special was what was inside. Jesus right here could have been like the disciples. "Go to town. You have to get some wine". The thing about Cana is it's in the middle of nowhere, so they can't go get anything, so they have to use something nearby. I wonder what's nearby that if you pour yourself into it God can flow again through your life. It's nearby. It's so close.

Remember, they all came into the party and washed their hands. The miracle was in something they had already walked by to get to the party. The miracle is in something you're walking by every day. It's in a Bible-reading plan you already started but just quit, and you can pick it back up. The wisdom you need might be in the wife you chose to do life with six years ago, but you don't want to listen to her because she's nearby. I will see men go to conferences to learn how to be a better man, but they won't even listen to their own wife because they don't want to be humble.

Now. "I know you don't know what I'm going to do, but I already know. I know you don't know why I'm telling you to do this, but I know. I know you don't know why I'm telling you to forgive, but I know what I want to do that I can't do in your life if you have a clogged heart, so do it now. Now"! "Now faith is the substance of things hoped for". Jesus never points to what's next without dealing with what's now. "Now draw it out". Now. I could imagine. He could have gone around the whole party, saying, "You should have planned better, and you should have known better," but he didn't do any of that, because he didn't point to what they should have done. It doesn't do any good. He points to what is now. Now. "Even though you could have done better… You could have done a better job. You need to fire your wedding planner. I hope you didn't give her too much of a deposit, because she really screwed this up, but now…" That's actually what Mary and Martha said to Jesus when he showed up for Lazarus. "If you would have been here, our brother would not have died, but even now…"

I feel the power of now on this word today. Now, now, now, now, now. The truth is you might be running out of time. Jesus only had three years on earth. Isn't it crazy? Think about this. I know what it feels like to be empty. I've been there in my own life, just dry and empty. "If another person asks me… I don't even want to do it". There's something significant not only about what Jesus did, water into wine, the law into the Spirit. We could preach about that. We will one day. That he did it in a ceremonial jar and it was an idea of the fact that the ceremonial washings of Moses were now being replaced by the blood that would be shed. It's all in there. It's a sign. It's pointing to a lot, but why did he do it in Cana? Why did he show his glory in Cana? To understand this, we need to meet Nathanael. Nathanael was a disciple who came to Jesus. Guess who brought him, by the way: Philip, the one Jesus asked, "Where are we going to get the bread from"? but he already knew.

I promise you he already knows, but he's just trying to make sure you know where it comes from. Philip brought Nathanael to Jesus. John 1:45: "Philip found Nathanael and told him, 'We have found the one Moses wrote about in the Law, and about whom the prophets also wrote—Jesus of Nazareth, the son of Joseph.'" There were 456 different expectations of the Jewish Messiah. Philip was doing the math. "Carry the one". He said, "I think this is him. I think so. I'm not sure, but come see". Nathanael starts trying to figure it out based on what he can understand. He's like, "Did you say Nazareth, that hick town"? He's like, "Nazareth"? Moncks Corner? See, I'm used to being from a place people don't respect when you say the name of it. "Nazareth! Can anything good come from there"? Nathanael asked the question, and Philip said, "I can't answer that, but you can come see".

I love Jesus. He said, "You believe because I told you I saw you under the fig tree. You will see greater things than that". Then they went to Cana so Jesus could show Nathanael what he just told him. "I am the one who flips the flow. I am the one who gives grace for shame. I am the one who turns rejection into blessing. I am the resurrection. I am the life". Your struggle is a sign. Your setback is a sign. Your secrets are a sign. God is with you. It is in you. Come on, release a shout of praise in the place! I said release a shout of praise! Give him praise! You will not run out. You might not have any wine, but if you have the one who can stir the water you will never lack. You will make it, and you will achieve it, in Jesus' name!