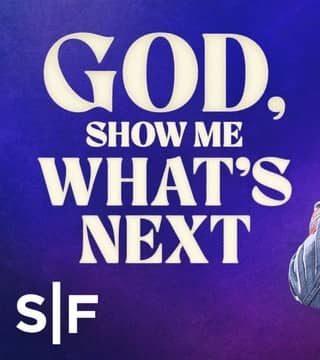 You know ghosted? You know the term? I'm not going to ask if you've ever been ghosted or been the ghoster. Ghostees, ghosters. When I was on the dating scene back in seventh grade, you at least had the common courtesy to have your friend break up with a girl for you, but now it's called ghosting. You just end the relationship by never responding. Technology has greatly enhanced our lives, hasn't it? You just never get back with them. Of course, I'm using it in two different ways. Jesus tells them about the Holy Ghost that's going to come on them and that he's going to give it to them, and then he leaves.

I was thinking, "Did Jesus just ghost his own disciples"? I was thinking that. I was thinking, Jesus gives them the biggest mission that has ever been given to a human, and right after he gives it, just when they're getting their notepad and their Elevation pen out to write down point number one… "Okay. Witnesses in Jerusalem, Judea, Samaria, ends of the earth". They look up for what's next, and he's gone. Now, the theological content of this passage is vast, and of course, there have been volumes written on the pneumatology, or the study of the Holy Spirit, as it relates to the transfer from the external to the internal. See, if you read the Old Testament, you'll see the phrase a lot that the Holy Spirit came on a person and the Holy Spirit overshadowed or rested so they could fulfill a particular purpose. If a prophet were to prophesy, the Spirit would come on them for that task.

Now we're seeing something very different that is born, something greater that is happening, as the Holy Spirit will no longer visit but inhabit. He's going to move in now. He doesn't want a guest room. He wants access to all parts of my heart and my life. So, the disciples, who have spent three years… Now let's talk about this. Three years with Jesus. Over the course of these three years, they have seen the power of his presence. After seeing him open blind eyes and even unstop deaf ears and touch lepers and minister in such a way, they had finally started to grasp the power of his presence. I don't know about you, but I want the presence of God in every area of my life this year. When I say that, what I mean is I don't just want to experience God's presence in church with you.

So, they spent three years understanding the power of his presence. Let me tell you something. Everywhere his presence is welcome, power is available. Everywhere his presence is welcome, power is available. Just know there is a huge difference between acknowledging God's presence and welcoming God's presence. To welcome his presence gives a picture that we will work with him, not fight against him, and accept the things that he allows in our lives, even sometimes the painful ones, and even inviting him into those areas of our lives where we would not expect him to appear. Do you know you can invite the presence of Jesus into your relationships? Did you know that one time in John, chapter 2, Jesus was invited to a wedding and he went? "You don't have time to go to a wedding; you're the Savior of the world. Come on, let's go to a press conference". He said, "I want to go to this wedding because they're going to run out of wine".

The presence of Jesus is powerful when you run out of stuff. They had no more wine, but they had some water. When they filled the six ceremonial stone jars with water (and they held 20 to 30 gallons each), the water turned to wine, because the presence of Jesus is that powerful. The presence of God can transform "not enough" into "more than enough". The presence of Jesus is powerful. So, you can invite him to your wedding. You can invite him into your relationships. You can invite him, and his presence is powerful. You can also invite him into your boat. Trust me; you want Jesus in your boat. Ask Peter. Peter let Jesus use his boat, ostensibly so Jesus could preach a sermon, but Jesus had an ulterior motive, because he wanted to show Peter something about the power of his presence. When he got into the boat, not only did he preach, but after he got done preaching, he said, "Peter, I appreciate it. Are you ready to catch some fish now? Before I got on your boat, I noticed your empty nets. I noticed you aren't very good at life without me, but if you want to put your nets back down with me on your boat, you might just find that what was empty without me is going to be full now that I'm in your boat".

I want Jesus in my boat this year. I want him in my business. I want him in my decisions. How many of you want Jesus in your phone this year? I want him in my contacts. I want him showing me who to delete, who to mute, who to ignore, who to text back, who to call and encourage, who to FaceTime, who to ghost. One time, Jesus was in a boat sleeping, and the disciples encountered a storm. He was in the bottom of the boat. He wasn't even walking around. He wasn't even praying. He was snoring, but the power of his presence is so real that even his snoring can still a wave. He got up with sleep still in his eyes and said, "Shut up and let me get my rest". When he spoke to the storm, he demonstrated the power of his presence over any force of nature.

So, if you are going through a storm right now, if he is on your boat, you won't go down. He is with you in the storm. The power of his presence. You have five loaves and two fish? It's not enough unless you know a man who can multiply it. When you put your little bit in the hands of the God who created everything, little becomes much. It's the power of his presence. Oh, by the way, be very careful if you invite Jesus to your funeral, because he might mess it up. He might make you roll the stone away. He might say, "Lazarus, come forth". Be careful getting too close to him. He might awaken a dead dream. After all, he is the resurrection. He is the life. He is a new beginning. He is power. He has all authority. For three years they saw the power of his presence, but now they are about to experience the power of his absence.

"I don't think I like this part. I didn't like that turn you just took there. Bring it on back to the power of the presence. That's good. It starts with a P". "Bring it on back to the times when I feel close to God". The text said, on the verge of the greatest not visitation but habitation of the Holy Spirit, which would come not only to the disciples but to all of us who would believe in his name… When they got closer and closer to the real purpose Jesus came for, in verse 9, is the moment he left their sight. The power of his absence. I never heard a sermon about that. I heard about his presence. I heard about the tabernacle and the temple and the shekinah glory and the table of shewbread. I've heard all manner of messages about the power of his presence, but we see that the kingdom was inaugurated with what they perceived to be his absence. What is God doing in your life right now that is actually an indication that his presence is becoming stronger and more real but your emotional sensation is that he has left you?

Now, the power of his absence is really a matter of us understanding that God is not limited by physical dimensions. I know you know that, but he never really leaves. However, he does change forms, and he creates space where we can experience him. It's almost impossible to preach about the power of his absence, because we have come to so closely associate the presence of God with our comfort. It's difficult for us to believe that in the moments we feel him or understand him the least he might be working the most. I'm going to say that again for the people in the back. I'm going to say it differently. In the absence of answers, faith is born. In the absence of resource, creativity is born. That's when you have to figure out what to do with a stick when you're standing in front of a sea, when you don't have enough.

When is the last time we thanked God for something he didn't give us because it showed us who we really are? That's what I mean when I say the power of his absence. I don't mean that it feels good when people walk away from you and when people don't show up, although, if we're honest, there are certain people that when they don't show up, we silently thank God. Do not pretend like there aren't people in your office that when you hear they're sick… You pray for them. "I hope it's not too bad, but, Lord, if it could last the rest of the week, that'd be all right, and then they get well. I just need a little breathing room". Have you ever had somebody, by the way, leave your life who you thought you couldn't live without, and then you did? I even had staff members… I've been pastoring this church since before I had a beard. People would leave, and I would get confused. I would start to think that because they left, what they brought left. But what they brought came from God, and God will send another truck with the package if somebody decides to leave.