Steven Furtick - Show Your Scars, Not Your Wounds 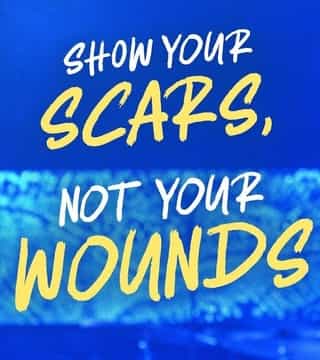 Whatever has wounded you, whatever you hide, whatever happened… When Jesus shows Thomas his scars… I'm glad he kept his scars. I'm glad he kept that part. I'm glad he didn't stay dead, but I'm also glad he came out scarred, because that gives me hope. That's how I try to preach. I don't want to preach wounded, because if I preach wounded I'm going to inflict my pain on you. I don't want to be a wounded parent. I don't want to be a wounded spouse. God spoke to me a couple of months ago and said, "If I've really healed you like you claim I have, why are you still so touchy"? Thomas said, "I want to see where the wounds were".

When I teach preachers, I tell them, "Don't you get up and tell the church all of the ways you woke up at 5:30 a.m. If I put you in my pulpit, show the church some of your scars. You can show them the stones God has rolled away. That's fine. That's a part of it. He is a God of miracles. He is a God who makes dreams come true, and we all have some stones he has rolled away, but we all have some scars too. So show them your scars. Show them where you didn't get up at 5:30. In fact, show them where you pretended like you didn't hear the baby crying at 5:30 and Anna got up. Tell them that story. Tell them how you almost quit. Tell them how you wanted to throw up the first week you went out to preach after the news media ran a story about you for four days straight, saying things about you. Tell them that. Tell them how you were in the bathroom and you came out smiling".

Show them where the wounds were, and it'll give them hope that what wounded me doesn't have to hold me forever. It's time to be free! It's been long enough. It's been seven days. Forgiveness doesn't mean it didn't happen. The scars show it happened. Jesus didn't show up and say, "What cross? What are you talking about? Cross? I don't remember a cross". I remember a preacher saying one time… This guy is an idiot. He should have his credentials revoked. He said, "If you've really forgiven someone in your heart, you will not even remember the offense". There is a word that comes to my mind to describe what he said, but I'm going to just say it's inaccurate. It's not denial.

When I say forgiveness… I have to be careful, because I'm a pastor. I'm not just passing through preaching one week and leaving. I'm trying to go on a journey with you and to let you know that when you let go of whatever wounded you so that you can be free and go into the future God has for you, it doesn't mean you pretend it never happened. This is not denial. The nails were there. "My dad walked out on me". Not my dad. I'm saying you can say, "My mom had an impossible standard I could never live up to, and I believe part of my eating disorder today has to do with that". I'm not saying it didn't happen, but I can't let it hold me. I cannot blame her forever, not if I'm a Christian, not if I worship the one who was wounded for my transgression.

I need to let you know something. The hardest person you'll ever forgive is not your ex, is not your mom, is not your dad, is not your neighbor who came over your fence and your property line. The hardest person you will ever have to forgive is yourself. Truth be told, it is my self-inflicted nails that I have the hardest time letting go of. I want the Devil to know when he comes to hammer at me with accusation… I don't know where you go when that starts to happen, how worthless you are. Have you noticed the Devil loves to hammer you? He has a big hammer, but let me tell you a little secret. He ain't got no more nails. Somebody shout, "No more nails"! The next time the Devil hammers you with accusations, shout back in his face, "You ain't got no nails"! All my nails are in that cross. All my shame is on that cross. "There is, therefore, now no condemnation for those who are in Christ Jesus, because through Christ Jesus the law of the Spirit of life has set me free from the law of sin and death".

The Devil might have a hammer, but he doesn't have any nails. "Reach out and touch the place where the nails were". Where they were. It doesn't mean it didn't happen. It happened. I fell short. It happened. I ruined the relationship. It happened. They abused me in ways I don't even want to tell my own spouse. It happened. I deal with the traumatic… It's not that it didn't happen, and it's not that it doesn't hurt. That's not what forgiveness is. Forgiveness doesn't mean it doesn't hurt. The nails might be gone, but the memory is still there. It's really easy to forgive sometimes when the person you're forgiving is gone, but when you still have to work out shared custody, when you still have to live with the memory, when you still can't be touched without recalling the shame of when you were touched the wrong way, and now you're trying to learn how to love the right way…

When you're trying to learn how to trust, it doesn't mean it won't hurt. Away with the preaching that will teach you that the pain will go away when you forgive the offense. It's not that the pain goes away. I'm helping somebody. I'm setting somebody free. You keep waiting for the feeling of forgiveness to come. It's not a feeling. It takes faith. I said it takes faith. It takes faith to believe that the same place where the nails were is the same place where the healing is. They saw it in his scars. Jesus needed those nails. If they hadn't nailed him to that cross, if the blood didn't flow from that place, the power wouldn't be released. I'm saying not that God is going to take the scar away but that he is going to release the greatest strength in your life from the place where the nails were.

Shout, "No more nails"! It's a declaration. It doesn't mean it didn't happen. It happened. They bullied you. It happened. They lied about you. By the way, not only have you suffered some wounds but you've inflicted a few too. It's kind of crazy how we can be comfortable putting all of our nails in Jesus' cross but then walk around with a pocketful of our own to put in other people. If all my nails are in his cross, that means all of yours are too. I cannot demand to receive a grace from God for me that I will not give to you. What it means isn't that it didn't happen. What it means isn't that it didn't hurt. What it means is not that I won't handle it. I might not be able to be friends with you in the same way anymore, because I might not be able to trust you.

Forgiveness is not the same as reconciliation. Don't go message your ex on Facebook when you're married now for 12 years, talking about, "Will you forgive me"? with "In the Still of the Night" and "End of the Road" flashbacks to prom. It's not that things won't be different. It's not that I won't handle it. "Thomas, I want you to put your finger in the place where I was held to the cross, and I want you to know that what held me doesn't hold me anymore". That's what forgiveness is, friends. It's not that it didn't happen. It happened and it was horrible. It's not that it doesn't hurt. It's just that I'm not going to live in the offense any longer.

I've been wounded long enough. Why would I choose to stay wounded when healing is in his hands? Why would I keep nailing you to a cross when it's only hurting me? Somebody say, "No more nails". The Spirit of God is in this place. No more nails. It's all in the cross. All my past. All my shame. It's all in the cross. No more nails. To be free, I have to let go. I declare over your life today not that it won't ever hurt again, not that some things won't need to change, not that it won't be a process.

Remember, this is only mile one of our journey. But if you will put your nails in that cross and trust what Jesus proved, that all things, even the nails, even Judas, even that… I talked to a woman who went through the most traumatic childhood experience you could describe. I wouldn't put it in this sermon, because there are kids who came in. What she went through was so horrible, yet she was able to look at me in the eye and say, "Although I wouldn't choose it, and although I'm not saying it was okay or that it was right or that God did it… I'm not trying to justify it. When I see how God has used even the things I wouldn't choose…"

It's not that I wanted it to happen. It's not that it doesn't hurt. I'm not going to fake. I'm not going to live in denial. I'm not going to stay in dysfunction, but I wouldn't trade my scars for anything, because my scars are the proof of his power. Yeah, I have scars. Yeah, I went through it. Yeah, it hurt like hell. Yes, they drove the nails. Yes, it was offensive. Yes, it was wrong, but, no, I won't stay here. No, I won't sacrifice my future on the altar of my past. No more nails! I'm coming out! Shout like you're free! How long do you want to stay wounded? How long do you want to stay stuck? It happened. I'm not living in denial. It hurts. I'm not going to live defensive, pretending like it doesn't hurt.

I have to handle it. I'm not going to live in dysfunction, enabling dysfunctional situations and calling it forgiveness, but I'm not going to stay here dead when he is risen. No more nails. It's going on the cross today. All of it. The sin you did, the sin that was done to you…it's all going on the same cross today, and all things, even the scars, not just the stone but the scars… All things will work together for the good. "Look, Thomas. It doesn't hold me anymore. Look, Thomas. Your doubt doesn't have to hold you anymore. Look, Thomas. Touch it. See my scars? I know you have some wounds. They've been open long enough. It's time. It's time, Thomas. I know you're not over it yet. You may never feel completely over it, but you have to move on. You can't stay like this forever. You can't stay angry about it forever. You have to get going".