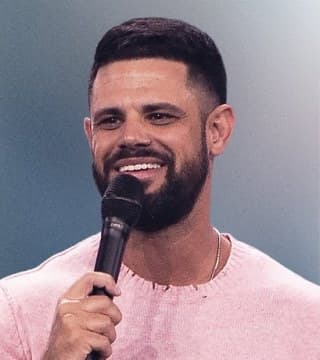 I'm trying to preach to all of these different people. It's just different. You picture like, "Joseph had a dream. Do you have a dream? Everybody who has a dream… Do you have a dream? Dr. King had a dream. You have a dream". It's not the same kind of dream. This was a dream Joseph didn't decide for himself. Don't follow your dreams, because what if your dream was just the first draft? Are you open to a revision? I wanted to be a punk rocker. I wanted to sing songs. I didn't know God was going to let me pastor a church and write songs that churches around the world would sing as an expression or as an anthem of faith. It wasn't my dream, but God took that desire and gave me the dream.

I don't have to be the one singing the song; I just want to be a part of it. It's the value of a bigger picture. But your dream can be a distraction, because now you're not following Jesus; you're following your dream, and when your dream takes you down an unexpected path you start to complain and freak out and get frustrated. You are missing the dream because you will not wake up to the reality. Sometimes we don't know the difference between a dream and a fantasy. I told our staff recently, "This is the dream. When you're frustrated in ministry, remember that some of you were watching Elevation Church online before you came to work here and you thought, 'Oh, if I could ever get there one day.' But you didn't know the baptism tank was going to be half full when you got here and you'd have to fill it up right before. Next time you get here and the volunteers don't show up, just say to yourself, 'This is the dream.'"

Waking up in the middle of the night as a new mom. "This is the dream". Even if you have to fake a smile, the Devil won't know the difference. All he'll see is that you're smiling. "This is the dream". Yet it won't feel like American Idol. It won't feel like an Olympic gold medal ceremony, because it's not that kind of dream. By the time Joseph's dream finally came true (because dreams do come true), it was two decades later. Not only had he been falsely imprisoned, not only had he been forgotten about, not only had he been misunderstood, not only was he incarcerated for a crime he didn't commit, but in the process of it he was unappreciated for his part in someone else's freedom. Yet when he finally got to his dream, he realized something that is very hard for us to comprehend in an Instagram world: God develops dreams in the darkroom.

The issue is that we have an Instagram expectation but we serve a darkroom God. When you get your picture developed by a professional, they don't post it 10 seconds after they took it with a prefabricated filter by Instagram Incorporated. They take it into a special room, and they do special things in a special room. If any of y'all ever had to drop some film off at CVS, if any of you ever had to go through a season of your life where you had to trust a professional, where you had to put something in the hands of God, where you had to hand him the negatives and trust him to take the negatives into the secret place of the Most High, into the place of his purpose, into the place of his wisdom, into the mystery.

If I put it in his hands, and if I have the patience to let it develop, if I have the patience to know that every scene of my life is playing a part in the bigger picture, not of the dream I had but of the desire that was in God's heart… I might be standing in the middle of a dream I don't have the clarity to see right now because the picture does not match my preference, but I'm willing and ready and able to trust God, even in the dark places of my disappointment, because I understand that some of God's greatest work happens in the dark where I don't understand and I'm feeling around.

"I thought I was going to be done with this by now, and I thought I'd be different by now. This is not how they put it on the box. This is not how the hamburger looked in the commercial, but here I am, God. I trust you, not my dream. I trust you, not my idea. I will not make my ideas my idol. I'm worshiping you. I'm serving you". It's not about position; it's about purpose. When he finally had his dream come true, it was not in the form of shiny stars; it was in the form of his 11 brothers who betrayed him coming to him and asking for food.

Joseph is in Pharaoh's court, distributing the grain for not only that nation but for all of the surrounding nations. He looks up at his brothers who hurt him, who are standing with their hands out, and realizes, "This is the dream. I'm at the center, but it's not for status; it's for service". Has God been trying to get you to see that in your own life lately? We attach ourselves to a version of a dream that may not have even come from God to begin with. What if the greatest thing God is going to do through your life is what he is going to allow you to contribute to somebody else's? Are you open to that dream?

When the angel came to Mary, he said, "You're going to have a baby". When the angel came to Joseph in a dream, he said, "You're going to help her". What if the dream God has for me isn't even about me? It's the danger of a dream to start thinking like, "This is what my kids are going to grow up and do". Get your Harvard mug out of your coffee mug cabinet. What if your kid doesn't turn out to do what you wanted them to do? What if God has a different dream for them? What if it's better? What if it's deeper? What if the reason God let your dream die is because it wasn't big enough? When we put too much pressure on a dream to come true, we allow our dream to become a distraction from the season we're in.

I wonder if there's somebody here or watching online who is standing right in the middle of the dream, but it looks different than it did in the distance. This is the dream: to know him, to serve him, to love him. There are two types of people in the room. Some of you are discouraged because you had a dream and it didn't happen. It hasn't happened yet. Don't know if it will. Others are disillusioned because you're in your dream, but it's different than you thought it was going to be. You're standing at the middle, but it's your brothers around you. God said that today was going to be a day for you to see the dream for what it really is and let go of the illusion of what you thought it would be.

If you stand right now, I'll pray for you. It's one of those things we all have to deal with at different points in our lives, to realize, "This is what I saw, but it just doesn't feel the same". Are you open to a different dream? Maybe it's not even a different dream. Maybe it's just a more mature version of it. The disciples had a dream for Jesus. "He's going to restore the kingdom of Israel". When they saw him hanging on the cross, they didn't know what to do with that. That wasn't the way they saw liberation, but that's the way he did it. It is in the process of doing it and accepting it that greater faith is born.