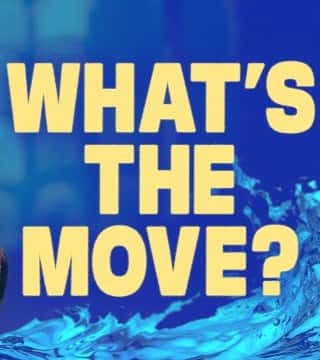 Sometimes we think people have faith when they're really just freaking out, really just doing stuff. "Wow, man. That's great faith". This man said, "I don't even need a dramatic sign for you to do it". God doesn't always need drama to do it. Such a simple word, such a deep expression of faith, yet that's really not the message, is it? Because he still fell. This encouraged me. He failed the test, but he still got the lesson. Everybody who wasn't a really good student, this is your part to shout on. Everybody who's nervous about homeschooling your kid, this is your point to shout on. He failed the test, but he got the lesson, because it really wasn't a lesson about water; it was a lesson about worship. "Truly you're the Son of God". And they began to worship him, and the wind died down when he got in the boat. The essence of salvation is this: by grace through faith you are saved. "And this not of yourselves; it is the gift of God, not of works, so that no one can boast" (Ephesians 2:8-9).

I never saw this as a picture of salvation because I was so focused on the storm. Sometimes we go through things that we get so consumed by the test we don't even get the lesson. I want to show you in the text that Peter, beginning to sink… I don't know who this is for. It might not even be for anybody who's in this room, but Peter's faith was not in his ability to make it to Jesus. The Bible says that when he started to go down, immediately he reached out his hand and caught him. Reach out and catch my hand. You can't unless I'm close. My faith isn't in how far I can walk. Do you remember when Graham started playing at catcher? He got pretty good at catcher. I was so proud that my kid was good at a position in baseball. Just like me. I was a catcher when I was a kid. I was proud. The league they were in… Usually, they wouldn't even try to make a play at home, because all of the catchers sucked except ours. Our kid was the only good catcher in the whole league. The coach kept trying to get the third baseman to make the throw at home, but he wouldn't do it.

I remember one time the coach was yelling at the kid playing third. He was like, "Make the throw at home! When he's going home, you throw him out"! He said, "I can't make the throw". The coach said, "That's all right. You've got a good catcher". Something in my mind brought me back to remind you today in Water Walking 101 that you have a good catcher. I don't know if I can make the throw. I have little faith. But I'm going to go ahead and throw it out there. Not because I'm going to make it all the way, not because I know how this ends, not because the wind is dying down, not because I'm so good at walking on water. I'm trembling, and my legs are weak, and I don't really know, but he's close enough…

My sixth point is grace and faith go hand in hand. When you don't really believe in the grace of God, you don't have faith in God, because until you really believe he's close enough to catch you, you will always stumble. Peter's faith was not in his feet; it was in Jesus' hand. It is by grace through faith that God is going to get you through this storm. I need you to praise him right now for little faith. Watch this. I have little faith, but I have great grace. Oh, I have great grace! I have a big God! I have a good God! He's got me and he won't let go! Throw up your hands and give him worship. I found out how to walk on water. I don't walk on water with my feet; I walk on water with the Word.

He said, "Lord…" Isn't it crazy that when Peter's legs failed him his mouth saved him? He cried out, "Lord, save me". And immediately… I'm telling you, if you reach for grace right now… My confidence is not in the fact that I'm able to walk so perfectly; my confidence is in the fact that he's close enough to catch me. My message today is that sometimes the way you go to deeper faith is to just fall in the right place. This concludes Water Walking 101. If you know he's the one who can make the wind die down with one word from his mouth, give him praise right where you are. Give him praise and honor. I have a good catcher. I'm a wobbly walker, but I have a good catcher. So I'm going forward! I'm not going under!

You know what? That wind is tricky. Peter came toward Jesus, but he looked at the wind. Right now, in your life… Listen to me. I want to say this like I would say it to one of my kids. What you have to learn to ignore is just as important as what you have to learn to walk toward. Some of us are walking toward the right thing, but we are not ignoring the others. You have to get your eyes on the grace of God. You have to get your mind on the goodness of God. You have to get your thoughts on the possibility. I mean, what if he does it? What if he's guiding you? I know you've been thinking, "What if I fall"? What if he catches you? What if you worship? What if you put your worry in reverse? "O Lord, I believe that all things are working together for my good".

I don't know who this class is for, but it's just basic faith. My faith is not in my faith; it's in the grace of God. Listen. I hear him saying, "Come," the same thing he told Peter. I hear him saying to me, I hear him saying to you in this season, and that means something different right now for each of us. For you, maybe that means to draw near to God in this season because you haven't been hearing his word. You've just been blown by the wind. For some of you, that may mean you stopped walking toward what God gave you to do because of what was against you, but remember, the wind can carry his word into your heart. For a lot of us, it means that in this moment I just need to stop and say, "Lord, I'm drowning. O God, I can't stay out here by myself. Would you save me? Would you help me up? Would you show me how to do it"? "Just say the word," the centurion said, "and my servant will be healed".

Lord, I thank you for the privilege to minister your Word today. Your Word is powerful. Your Word is eternal. Your Word is living. We put our hands in your hand right now. We put our faith in your grace. We open our mouths to say that truly you are the Son of God. It's the fourth watch of the night for somebody. Literally, they've been wondering, "Am I going down and is this it? Is there even another side? I don't know it anymore". I thank you that your eye is upon them and that you sent your word today to speak right to that situation. After all, we can't really walk on water, but we can walk on your word.
loading...