Steven Furtick - What Are You Hiding Behind? 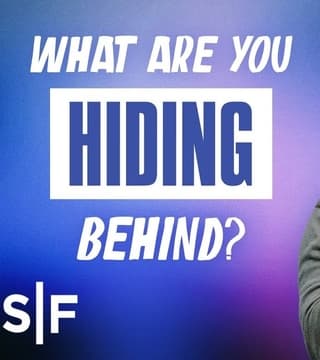 One thing I love about God's Word is that it doesn't just address my spirituality. It addresses my psychology. In Jacob, I see an illustrated sermon about the psyche of someone who is running toward and chasing something they can never get, meanwhile running from something they don't want to face. I believe every person in our church can relate to Jacob, hiding from an Esau in your life, hiding and hoping no one sees you for who you really are. You invent methods by which to be impressive. That's what Jacob did. He makes a plan. He makes a plan to hide his issues. He gets his messengers. You have to understand, in the last 21 years, Jacob was not struggling. Jacob was prospering. Jacob was succeeding. Jacob was accumulating. Jacob was working his way up. By this time, Jacob is very rich, and he has a lot of kids. He is, on the external level, doing pretty well for himself. What he does (and I think we all do this) is he tries to use what he has accumulated to hide who he is.

My mom asked me one time when she heard my band play, and she listened to the concert… We did all kinds of cover songs…Darius Rucker from Hootie & the Blowfish and Eddie Vedder from Pearl Jam and Kurt Cobain from Nirvana and all of these great bands, the kind of music you just can't get anymore out there in the cold streets of today's modern society. She said, "You sounded good tonight," because I was the lead singer. She said, "I have a question. When are we going to hear you sing? Tonight I heard an imitation Hootie. I heard somebody trying to sound like Pearl Jam, but it's kind of hard to sound like Pearl Jam when you just hit puberty".

I ministered that to the pastors, and it was really tense in the room, because anytime God peels back your persona, anytime you can't do what you do and you have to come to terms with who you are, it puts you in an awkward position, but that's the place where God blesses you the most. Not while Jacob was lining up the cattle. Not while Jacob was configuring the cows. The Bible says… I have to show it to you again. It's so beautiful. I love the way the Scripture weaves together the historical narrative and brings it into alignment with my current psychological condition to show me there is a way forward no matter what I've been through. It said Jacob thought…

Look at verse 20. "For he thought, 'I will pacify him with these gifts…'" "I will pacify my problem with my persona. I'm not going to make peace with it; I'm just going to pacify it. So I develop ways to get through, you know? I'm really sarcastic, and the reason I'm sarcastic is if I'm sarcastic, I don't have to be sincere. I hide behind sarcasm, and people think I'm cocky, but what they really don't know is what they see as overconfidence is really just a little girl scared to death because I'm hiding behind my herds". "People think I'm arrogant, but what they really don't know is the reason I'm coming across so strong is I'm scared to death they're going to find out I'm a fraud, and I don't know what I need to know".

I'm going to hide behind my herds. The only problem with this approach to life is what you get them with is what you have to keep them with. If you get them with a fake you, what are they going to do when they see the real you? Man, help me preach this sermon. It's those hidden issues. Yeah, I'm encouraged because the Bible says when Jacob sent his gift ahead he remained alone in the camp. To every lonely person today, I want to encourage you to know that the places of your greatest isolation will often become the places of your greatest revelation.

Jacob had seen God in the form of an angel when he was with people, but he only saw God's face when he was all alone, separated from his stuff. He sent his gift ahead, but he himself spent the night in the camp. God dealt with him, and God pushed him around a little bit. God brought him to his breaking point, so much so that the Bible says when he got done and he left that camp, he was limping. He was limping, but he was blessed. His hip was dislocated, but his identity was now securely in place, because he found out who he was.

God said today through the preaching of his Word, he was going to restore unto you an awareness of your identity, because you've gotten so enmeshed and entangled with your stuff and your skills that you've lost your sense of substance. But today is the day the hand of God is upon you heavy to show you who you are. Wow! He crossed the ford. Look at verse 22. He "…crossed the ford of the Jabbok". Say…what? The who now? The Jabbok. Jacob crossed the Jabbok. Let me try it like this. All his life, he thought he was fighting against Esau. For 21 years, he thought he was running from Esau, but God showed up to show him the only real enemy he was ever fighting against…

I am not responsible for fixing Esau, because when I do battle with the enemy in me, the insecurity in me… It starts with an I, people. Issue starts with I. I'll try to get an Apple endorsement here. You need to start sending more "I messages". Not, "You need to…" and "You need to…" and "If you would just…" and "If they would just…" and "They don't want you to…" and "I don't want…" and "They don't want…" No, no, no, no, no, no, no. "I will bless the Lord at all times". "I can do all things through Christ who strengthens me". I am the head and not the tail. I am a child of God. I will not fear, though the darkness beset me, though the Enemy… I, I, I, I. How can I make peace with Esau if I can't even make peace with me? God is so good, because if you will devote yourself to the issues within you, he'll handle the issues around you. He'll do it.