Steven Furtick - It Sucks, But It's A Start 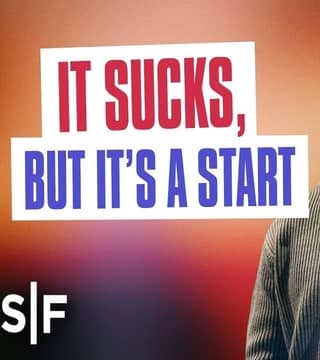 Chris Brown: You’re always writing something. That’s what I’ve told so many people that you know, you’re writing every six days a sermon. So your flow is continuous, whether it’s a song or whether it’s a sermon because you’re just always pen to paper. And so you’re always hearing from you know asking God what he wants to speak to our church week in and week out. I think so many of our songs come as a result from the overflow of what we’re learning in church.

Steven Furtick: And it kind of goes with the second one, we can mention ‘em together. It’s always be connecting; always be collecting. And by collecting, we mean... remember the woman who came to Savage Jesus and she’s like "my daughter’s in trouble". He’s like "I don’t give the children’s food to dogs". She’s like "I’ll take the crumbs". I’m scrappy like that. Anything that I think God might have possibly given me. It’s a voice memo, or an evernote, or on a napkin somewhere. I am very very greedy for any phrase, image, concept, any little melody. Anything. And what I’m doing with all of that in the collection phase is not categorizing it yet, just collecting it. And when I collect something, and we’ll do this real time. I didn’t plan this out. I’ll find one and give you an example. I don’t always know what it is when it comes.

If you can relate to that, wave your hand. I don’t know what it is, but it’s something. It’s a little bit of oil. I don’t know what it is but it’s something. And you have to learn how to respect your something’s enough to record them, enough to go back to them, enough to live in them, enough to pour them out. You have to respect your something even when your something sucks. Our favorite phrase is: it sucks but it’s a start. So I have in this phone, let me count the notes, 6,053 notes. On Evernote. And mostly I write on paper. Ask him, ask Buck - he works out with me. And in between squat thrusts, I’m making up an excuse to write something down. It’s a good way to procrastinate in your work out by the way. “God’s giving me something”.

And I don’t know what he brings over there. He’ll start working on something, but I’m gonna respect it enough to collect it to have somewhere for it. I’m going to have a jar ready in case oil feels like flowing. Do you have that set-up? And it doesn’t have to be organized because now you can search stuff just with a box. I’ve been sending him songs. Poor Chris. While he was recording this last album, I was sending him song starts for the next one. It’s kind of dysfunctional, but he loves me. I wrote down Beta Blessings the other day. You know like a beta version. Beta Blessings. I don’t know what it is, it’s something.

I put this sermon, Beta Blessings, in my phone, and I checked on the info tab on my Evernote, and it said I put it in in 2018. It has been that long in my phone. Then there comes a time when God will prompt me to release it and preach it. When I put it in my phone, Beta Blessings, I was thinking about the things God does in our lives in certain seasons that, at first, we're not sure if it's a blessing because it's in beta. When I wrote this sermon down in 2018 and couldn't figure out exactly how to preach it, I thought it was wasted. It wasn't wasted; it was in beta.

When the Israelites were in the wilderness, God was with them. He never stopped being with you. He's not waiting for you at some future destination. "I want to get closer to God this year". That doesn't come five Bible books you've memorized later. Then a lot of times, we'll be like, "God, bring me back to the love I had when I first met you," which is typically overrated in our imagination, because we weren't as holy as we like to tell ourselves we were when we first met him. When you say he's the Alpha and the Omega, you have to also mention that he is also beta. That's in between alpha and omega. That's where we need his presence the most.

How many understand that when a new year changes and a new year begins and there's so much excitement or when a new year ends and there's so much desperation… We've kind of missed the point that some of God's greatest blessings are beta. Some of God's greatest blessings are in the form of manna. I don't know if you've been watching the sermons or slacking off, but I'll catch you up real quick. I've been talking about manna in the wilderness. He gave them manna, which means "What is it?" Isn't that cool? They needed food, and God gave them something, and they didn't recognize it as a blessing at first. "What is it?" That's what manna means. Manna also means what it is. It is what it is, and I don't yet know what it's going to be. That's true about your life, and that's true about the thing you're praying about right now. That's true about everything God has put inside of you.

I want to look at this real quick because it's so powerful. In Joshua, chapter 5, it gives us a picture of this transition. It says, "The day after the Passover…" This is the Israelites. After going through the wilderness for 40 years, after dealing with the situation for 40 years, the Bible says they celebrated the Passover, and they ate some of the produce of the land that God had promised. What kind of bread? I preached about this last week. They came out of Egypt with unleavened bread. They didn't have the time for it to rise, but they had to go. Sometimes you have to set out with a word from God not knowing all of the details. Even Abraham had to do this.

God said in Genesis, chapter 12, to Abraham… This was before he even had an H in his name. This was before Vanna White even sold him… This was back in the times when Vanna White used to manually turn the letters. Some of y'all don't know. This was a long time ago. This was back in the very beginning. Did I just preach Wheel of Fortune by accident? Yes, I did. I did it on purpose too…for the real ones. Watch this. Before Abraham knew where he was going, he had to leave what he knew. Don't quit your job. Don't sign a divorce paper. That's not what I'm talking about. I'm talking about abandoning your way of thinking.

The Lord said in Genesis 12:1, "Go from your country, your people and your father's household to the land I will show you". Do you notice how specific God was about what he was leaving from and how vague God was about what he was going to? That's where beta blessings are required. That's the beta version of the blessing of God. Follow it a verse farther. This is God's original blessing to his people coming through Abraham, the father of our faith too. The nation of Israel would all come through this one man, but it was still in beta. The Lord had such a big vision for how he wanted to use Abraham as a blessing. "I will make you into a great nation, and I will bless you; I will make your name great, and you will be a blessing".

Do you see how big that blessing was? But it was still in beta. Correct me if I'm wrong, but when they have it in beta, they don't release it to everybody. You have to sign up for that. God was going to bless the whole earth through Israel, not just them, but we encountered them the last few weeks in the wilderness while they were still in beta. The Lord told me I'm preaching to some people today who are in the beta version. When it's in the beta version, they're usually working out some bugs. That's why I don't put it on my phone until later. I want to wait until they get all of the bugs out. I wonder. Did God take his people through the wilderness for 40 years, around and around in circles, to get the bugs out?

I wonder. Has God left some of the things in our lives in a holding pattern or brought us into spaces where we're not getting what we're praying for or it's not happening as fast as we want it to because maybe he wants to get the bugs out? So I'm praying a prayer over my life this week. "God, get the bugs out".

I don't want to release a version to the world… Before I preached this message to you, I preached it to myself so I could get the bugs out, because before I release it, before I put it out on YouTube where everybody with a broadband connection and an opinion can judge it, I want to make sure it's what God wants to say. I had it in my phone three years to preach to you, because God wanted you to have it right now, but it wasn't wasted; it was in beta. God said, "There's some stuff you prayed for, there's some stuff you asked for, there's some stuff I know you need… It's in beta". This relationship isn't a bad relationship; it's in beta. This song I'm working on isn't a bad song; it's just in beta. That book I worked on last year that's not ready to be released yet wasn't a waste of time; it's in beta. I put it in a box in my room to remind myself that Lazarus might go in a box for a minute, but he will rise again.