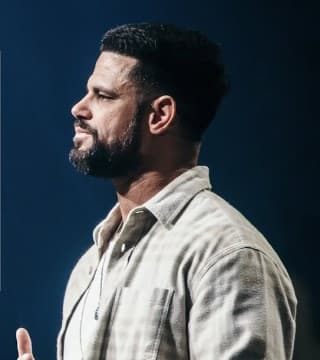 When I told you that verse, I left something out. I left out who said it. It sounds like something we say to God. I wrote a song with some friends, but I started it in my basement one night. I don't like the way my voice sounds that much. Sometimes it sounds good in a certain range, but then other parts I just don't like to hear it that much. But it's okay in a certain range. I said it that way on purpose, because one time I said on stage, "I'm not a singer," and Holly said, "Next time you talk about that, leave that out. Don't you ever say you're not a singer again".

I got scared, like God might give me nodules or throat cancer or something if I said it again. I was like, "Okay. I'm going to leave that out". But the fact is I have to go in this big, echoey room to sing, and then I'll send these memos to Chris and different people. I wrote the thing that said, "I am available. I hear you call; I am available". It wasn't many notes, but it was just a thought. A little while later, we got together with some friends, and some different things came together, and the song is something we recorded. We sang it earlier in the service I was in. The part of the song that really touches me says, "Here I am. You can have it all". That's a great prayer.

In fact, right now, where you are, just put your pen or your phone down and just lift your hands like this and say, "Here I am. You can have it all". That's a song of surrender. Now put your hands down. I left something out. In the text, that wasn't something someone said to God; it was something the father said to the son. When I show you this, it's going to flip how you're going to be living this week. In Luke 15:31, the father said to the son, the older brother, the one who wouldn't celebrate…not the one who wasted money, but the one who was wasting his life… He said, "My son, you are always with me, and everything I have is yours".

So I was thinking. The next time we sing "Available," we can sing the same words, but we can sing them instead of with our hands like this, "Here I am; you can have it all…" I want you to do this with me. We can sing it with our hands like this, because that's what the Father is saying to you. "You are always with me, and all I have is yours". Some of the clothes Elijah wears are from my closet. That's all right. All I have is yours. The ones in your closet are mine too if you want to get technical about it. It changed my thing, because I always thought it was this. Like, "You can have it, God". And God is like, "Yeah, that's a real good deal for me". "You can have it all, God". God is like, "Thanks. What a bargain. My blood for your broken…" But if you flip it and you say, "Here I am. You can have it all…"

What if God is saying that to you while you're saying it to him? The power of that point was in what I left out. I didn't tell you that the father said it to the son, so you thought you were supposed to say it to the Father. No, no, no. It's by grace. God is bringing you into a grace space. Everything that's being removed is making room for you to receive. There was no yeast in the loaf. God didn't want Egypt's yeast in your life for this next season. He wanted them to eat it. They eat the Passover meal every year to remember, not only what God brought them out of, but it was to remind them to have flatbread faith. If you don't have enough, that's all right. You can still eat flatbread. Y'all are too luxurious. Y'all need a bubble bath blessing.

Some people need a yeast roll word of God. It has to be buttered like you want. Have you ever gone to Quincy's with the big fat yeast roll? Some of y'all need the yeast roll blessing. Some of y'all need the Krispy Kreme blessing. But how many of y'all have flatbread faith? I didn't have enough, but somehow… This is the fish and the loaves in the New Testament. This is David with… I see David showing up to the battle lines. I see you showing up to your life with one stone, 5'7", looking small next to a nine-foot Philistine. But I have flatbread faith. I have cheese and bread for my brothers, and I have a rock that'll knock out a bear.

I have a praise that will stun depression. Flatbread faith. You think we're praising him because of what God gave us. We're praising God because of what he took out, what he removed, what he pruned for more fruit. We have flatbread faith. We're going into Canaan. Egypt is not our emotional home, and the wilderness is not our destination. Flatbread faith. What God leaves out is what makes you a masterpiece. It said 600,000 left Egypt, and they didn't count the women and children or the rabble, but it was the rabble they didn't count, what they left out of the number, that cost them in the wilderness. Do you see how it works? It's what God leaves out. "I'm not a great singer". That's awesome I'm not a great singer. It made me surround myself with great singers.

See how it goes? We had a board meeting the other day where we oversee the direction of the future of the church, and it was amazing to celebrate what God has done. In a global pandemic, with the inability to open most of our campuses to full capacity, God still grew us. How? I don't know. He left out what I thought we needed, and he gave us what we didn't know to ask for. That's true for you too. It was all of these numbers. Chunks is our CFO. Chunks and Amy started the church with Holly and me. I was telling Holly afterward how my eyes went blurry while he was going through the numbers. I was blurry with the blessings of God. A little zoned out too. I like words more than numbers. That's another thing I said one time preaching. I said, "I'm not a businessman; I'm a preacher". Holly said, "Leave that out. You are a businessman. You're everything God called you to be. You built a great ministry. God has anointed you".

So I never said it again…until just now to tell you I never said it again. It's not true. I was telling Holly… We went on a walk just to decompress before I started getting into the sermon. I said, "Holly, it's amazing that God sent us Chunks and Amy". I told her this. I said, "Even what makes him get on my nerves is what makes him so great for us to partner in the gospel". Sometimes he'll run up to me talking about… I'll be working on a book or a song, or something, and he'll be like, "Are we ready to put it on Spotify"? I'm like, "On Spotify? I haven't even finished the verse yet. I don't even have a second verse". That's what makes us great. What God left out of me he put in him.

Now don't get me wrong. You're complete in Christ. If a person leaves you, God is always faithful. That's not what I'm saying. But when we said the disappointment, when we said the deficit… That's just the way you frame it. The place of the deficit will be the place of deposit. That's why we carry the unleavened bread. That's why we still eat it: just to remember. "Well, I didn't have yeast in the bread then. I don't have money in the bank now. I don't have this wisdom here. I don't have this experience here". That's why you carry around that bread, and that's why you eat it: to remind yourself that God's presence is often most evident in what he left out.

We love to celebrate what he gives us. If he gave you a new house, praise him. I've received God's blessings in my home, in my cars, in all of those things, but sometimes what he left out makes it special. Sometimes you have to leave with what you have. I don't mean leave your church, leave your marriage, leave your home. Y'all quit misinterpreting my Scripture before I can even post it on Facebook. I'm saying that in you, that's the grace space. What is that space for you? "I'm not good at that. I didn't learn that. I didn't have a dad to teach me that". That's the grace space. What God leaves out.

I think of it musically. You know I'm a songwriter. It took me a long time to say that, because I didn't think I was good at everything, but God surrounds you. LJ came from Toronto. I needed someone who came and knew all of the hymns. God sent us LJ. Praise God for him. He's amazing. All of the people who used to sit on a piano playing when I was preaching were great too, but then God sent an LJ, and he's awesome. Play a major scale. What key is that? D. What are the actual notes? Let's just do the numbers. I can play the notes. I just don't always know what to call them. That's the major scale. Play one, two, three, four again. That's the first four notes of the major scale, key of D. Play the one and the four. Play five and six. Drop the five. That's the six. Do the six, one, four, six. That sounds like something. "Amazing grace…" Do all the notes again. That's a scale. Leave out the other ones. Do the one, four, six. That's a song.

What turned the scale into a song wasn't what we put in; it's what we left out. God said, "I brought you out of Egypt, out of shame, out of sin. Leave it there". Leave the rabble there. Leave the regret there. Leave it out, for Christ, our Passover Lamb, has been sacrificed. So now let us eat the unleavened bread. First Corinthians 5:7: "Get rid of the old yeast, so that you may be a new unleavened batch…" Here's the anointed part: "…as you really are". All that other stuff… Somebody make this confession: "That's Egypt. That's not me". All that pig slop that's on you when you come… Leave that out. Take that off and leave that out.

For this next season of your life, all you need is the robe from your father's closet, the ring on your finger. Somebody get ready for some unleavened bread, because I am about to feast this year on the faithfulness of God. How many of you have that flatbread faith, that "one stone" faith, that "I know who I am and I'm chosen" faith? Yeah. That little boy with five loaves and two fish… If you have flatbread faith, if you have a praise that is not dependent on a circumstance, give it to him right now. It's a grace space. That's where grace goes. That's where the anointing goes. That's where the wisdom of the Spirit goes.