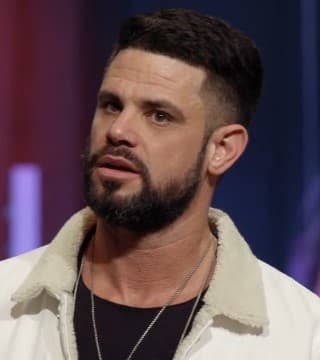 When you're living in it, you don't even know what you're looking at. That's why we really have to be careful not to wish away stages of our lives, because that was in your backyard. It took 2020 to get some of us to see that showing up early to get a seat at Ballantyne at 9:30 on a Sunday morning was a privilege back when we could all do it without fear. We had the favor of God. We still do. But some of it… It was our backyard. I just looked at it. I was like, "Dude, this is trippy. Are you sure they didn't move these mountains in since we left? Are you playing with me? Did you slip something in my turkey? What's going on? Is this really here? Am I hallucinating"?

Now, I need to say this to you. This might sound rough. Some of the places where God should be working the most in your life you're letting him do the least, and the reason is you're choosing what is familiar, and you are chasing away God's favor. For many of us, we're waiting on the vengeance. We think we know so much. When he rolls up the scroll and sits down, we think, "Well, it must be over, because God didn't do what I wanted him to do". It's finished when he says it's finished. He is who he says he is, not who you think he is. And you are who he says you are, not what they say you are. Whether they is your thoughts, your addictions, your insecurities, your secret stuff, you are not what that says you are, or your life. That's not what we mean by favor. We don't mean the facts. We mean the Father.

So, when they were looking at him, there's a Greek word they use, and it's used 10 times in the book of Acts, only twice in Luke. It says when he said what he said… He said, "Today this scripture is fulfilled in your hearing". Faith comes by hearing, but not with physical ears…spiritual ears. It's a terrible thing to have sight but be blind, Helen Keller said. It's a terrible thing. He's talking about opening blind eyes, but they are blind to the Blue Ridge Mountains that are in their own backyard. He is favor and he's right in front of them, just like the favor of God is right in front of you. I promise it is. It's everywhere. You bumped into it trying to get in a fight on your way out of the house today. You bumped into the favor of God. You had to push the favor of God out of the way to get to your bad attitude.

He said, "Today this scripture is fulfilled in your hearing". And he sat down, and they spoke well, but they were so familiar. "That's Joseph's son. Wow, he talks good, but we know him". Familiar. Favor. Familiarity. Is familiarity keeping you from God's favor? Are you addicted to feeling miserable? It feels familiar. If fear is your natural habitat for long enough, you'll seek it out. You'll find something to be afraid about. I started looking up estate taxes the other night and freaking out, and I don't think I'm dying. I just needed something to be worried about. I just needed something to freak out about. I didn't have anything in the moment. It was too good. I had to make something up in the moment. Isn't that crazy?

I know this is hard to hear, but please hear me with spiritual ears. Some of the frustration you just have to get through because it's not your fault. Some of it you're creating. You're creating it when you compare yourself to other people. You're creating it when you overload yourself with all this stuff you're looking at. You are making yourself frustrated. I'm going to tell you why you're doing it: because it feels familiar. You want what's familiar, because that feels like Nazareth. Favor feels funny. There's no equivalent for God's favor. People don't love you like that.

So, when God tries to, you push that away. "That's not familiar. I can't just trust that my sins are forgiven. I can't just pray to God in any situation. I can't just give God this burden. I can't just roll in on him and trust that he cares for me. I can't smile while I'm going through this. I can't trust wholeheartedly. I can't take the next step without knowing all of the details. That's not familiar". So, I will create frustration through a spirit of manipulation just to feel what feels like home to me. It said they fastened their eyes on him. The word is atenizo. It's used to describe a very emotional attention. I have to show you this. It's too important. This is what makes the difference. This is why I didn't see the mountains. This is why I couldn't see the Blue Ridge Mountains.

Verse 20: "The eyes of everyone in the synagogue were [atenizo]". It's an emotional focus. It's the same word when he was taken up in Acts 1:10. They atenizo. They watched, because they wondered, "If he's leaving, what's going to happen to us"? That's how you felt all year. "Well, if I'm losing this, if it's not like this anymore, what's going to replace this"? That's what the word was. It was the same word when Peter was cussing, when Jesus was being taken away to be crucified. The servant girl atenizo, fastened her eyes. It's not just like you look. It's like you're emotionally focusing on something.

Are you open to seeing the favor of God? I asked the Lord to do three things for us: make us conscious of his favor (you have to see it), to help us cooperate with his favor (to stop fighting against what God is doing in my life), and then the biggest part of all (this is why I want to give my offering next weekend), to make me a conduit for his favor. I want that, because this is the year of the Lord's favor. I don't know about tomorrow. He opened the scroll. That's the same thing he did in Revelation 5. They couldn't find anybody to open the scroll and break the seals, and then there was a Lamb next to the one who was seated on the throne, not stressed, not freaking out, and neither should you be, because no matter how it started, it's going to finish with favor.

What sin started in the garden Jesus dealt with on the cross and buried in his tomb. So, I'm making the declaration: you're going to finish with favor. Do you receive that or are you going to chase it away? That's what the people did to Jesus. He started speaking about the favor of God. He said it's the year of the Lord's favor, and they were atenizo. They were looking at him. They were expecting one thing, like we all are. "This is how it's going to be. This is how it's supposed to work". They're looking at him. They're focused on what they think he's going to do, but he said something very powerful. He said in verse 24, "Truly I tell you (amen, I say to you), no prophet is accepted in his hometown".

Do you accept what God is doing in this season of your life? I know what you expected him to do, but will you accept what he is doing? He said, "You are too familiar to receive the favor that is sitting right in front of you. You are so used to rejection you find it when it's not even there. You are so unfamiliar with acceptance you can't receive the love I'm sending you". Whoever you are and whatever this year has been like for you, the Lord sent me with a message. Today is the day of the Lord's favor. It is right in front of you. I don't care how it started. I don't care what it looks like. It doesn't matter what happened up until now. You will finish with favor.

Is that where your focus is? What you expected your kid to be like at age 18? That you expected you would have kids by now? What you expected to happen this year in your career? If that is your emotional focus, it is going to kill your favor. That's what happened here. Jesus goes all the way back to their history. "…there were many widows in Israel in Elijah's time…" Do you remember this story? I hope you don't, because if you're unfamiliar with it, you'll hear it better. He said there was a drought for three and a half years. There was a famine caused by the drought. Verse 26: "Yet Elijah was not sent to any of them, but to a widow in Zarephath in the region of Sidon. And there were many in Israel with leprosy in the time of Elisha the prophet…"

These are famous Bible stories: 1 Kings 17 and 2 Kings 5. You can look these up later. What you'll see is that God sent his greatest favor to the people who were least familiar. I wonder… Do we know too much? Do we have too much of a blueprint of how God is going to bless us? Have we lived in it so long we no longer see it for what it is? He said God had to go to a woman at Zarephath, had to go to a Syrian commander named Naaman to show what he could do, because the people who should have received his power couldn't recognize what was right in front of them. Can you?

God has given you some great opportunities this year. He has done some amazing things in your life this year. He has shown you some ugly stuff that if he didn't show it to you would have killed you. Can you receive that? Is this the acceptable year of the Lord? He's talking about his salvation, his deliverance, his ministry. I wonder if we have accepted this for what it really is yet, because that's the key. Will you accept the favor of God or are you pushing it away because it feels weird?