Steven Furtick - When Life Feels Out Of Control 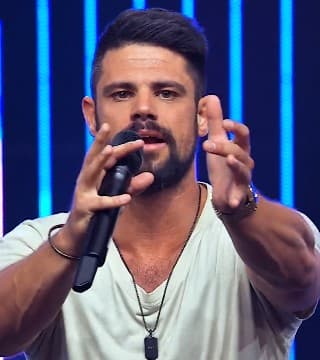 You can’t control everything that happens out here. You can’t control who walks by. But I can, give me camera one. This is what is called a tight shot. That means that this shot on camera 1 is only designed to show me. We can zoom in, zoom in until they see the gray hair on my beard. That’s a tight shot. That’s a terrifying shot you should zoom out. I just wanted you to see, that you choose your focus. They’re directing those cameras in the back and they are making the decision in the moment, what needs the attention.

So, it’s interesting. JJ can be on the stage, and if we’re working with the wide shot, he’s a distraction because what’s he even doing here? But let’s say, I can’t make him go away, he’s a campus pastor now, and he wants to be on the stage. But watch what I can do. Camera 1, I can focus. He might not leave the stage, but that doesn’t mean I have to keep him in my frame. I’m preaching about anxiety. I’m preaching about depression. You might stand there, but my faith gives me a focus. Faith is powered by focus. So they’re deciding back there, the camera operators what to put in the frame. That’s what it’s called, the frame.

The worlds were framed by the word of God. The reason they’re watching me preach on a screen is because somebody you can’t see is running a camera and framing it. It is the invisible aspects of your life that often determine the results. Faith is the substance of things hoped for and the evidence of things not seen. It’s a matter of focus. And so you frame up your life. You do it every day and Hebrews 11 and 12 give us a framework of faith. A focal point telling us to fix our eyes on Jesus. Now we need Peter to come and show us how to walk on water, whoops, he slipped. He slipped because he let the wind and the waves in his frame. We can’t blame them because the wind and the waves were there. The wind and the waves were there while he was walking on the water. But when you allow things in your frame that break your focus, your faith is weakened. And you will never build a solid faith with a weak focus.

Maybe it’s just because my 8 year old is playing baseball right now and that’s the thing I hear Coach Dave yell more than anything to these 8 year old boys, “Focus.” It’s not real complicated when you’re 8. Just have your glove on your hand when the ball comes. Some of you won’t even receive this word on a deep enough level to build your faith in your life because you’re not focused on what I’m saying. You’re thinking about who you’re meeting after church. But if you would focus on this word, the breakthrough is in this word I’m preaching. All you’ve got to do is focus. Focus. Because the frame of your faith. Let’s build this out actually. We need focus and then we need a frame of reference.

Like when you and Rachel took Bo to the hospital last week, Bo their little son is prone to injuries, more than most little boys I would say. He’s a bruiser. So he bangs his head against a pole on the playground during church and they took him to get some stitches. And the emergency room wait was 11 hours for some stitches.

Now, Elijah, if that had been you, I would’ve put a shoelace in your eye and tied it up. We would not have waited 11 hours. But, it was a deep gash so they probably needed to wait. I said, “Were you mad Buck? I would’ve been furious. 11 hours for some stitches?” He said, “I was a first. But the more people that came into the ER that night, I realized I might have to wait a little while, but some of them aren’t leaving. The longer I sat there the less frustrated I was and the more I started realizing this might be how I’m spending my night in the hospital, but some people have sent their last 6 months in the hospital.”

Nothing changed but the frame. That’s so often what we need is a frame of reference. Sometimes white people need to have a black friend. Sometimes black people need to have a white friend. Broke people need some rich friends. Rich people need some broke friends. What we’re doing is we’re trading perspectives. “Hey, take a look at life through my lens.” And we get wiser, and we get smarter because it’s a frame of reference. So often your perspective is developed in reverse. Sometimes the way to get through what you’re going through right now is to go to the wide lens.

Sometimes you have to play the tape back because the enemy will get you so focused on this one frame. This one thing, and you will lose your whole frame of reference. What are you doing staying up late worried about this one? No, you have to zoom out and change your frame of reference. That’s why I came to church by the way. I needed to be around some other believers. I needed to broaden my frame of reference. I needed to remember that I’m not the only one serving God and I’m not the only one going through. And I need Abraham, Isaac and Jacob. I need the whole cast of characters in Hebrews 11. I need Jesus to remind me that if he endured the cross I can make it through this crisis.

So we zoom out and we zoom in in life and what they really have to do back on the camera to be successful, to keep me in the frame. You have to keep joy in the frame. You have to keep hope in the frame. Faith is the substance of things hoped for. Faith is that invisible connection point by which I reach out and grab what I’m hoping for and bring it into this moment so that requires anticipation. I’m building something there by the way. I’m framing something here. Are you following? That’s they’re whole job.

There are camera operators who have been fired and they’re volunteers because they don’t anticipate my movements. These guys are professionals and they are instructed, look, Pastor Steven doesn’t stand still. And, just because he preached it one way at 9:30 doesn’t mean he’s going to preach it that way at 11:30. You’ve got to be ready, you’ve got to switch quick. God is like that, you know. You can’t just set the camera. This is how some of you live your lives and it’s why you don’t have any faith anyway. And it’s why you haven’t seen God do anything in your life. Take your hands off the camera.

Some of y’all just set the frame, and then say, “Well where is God?” but if you have faith, the substance of things hoped for and the evidence of things not seen. Jesus for the joy that was set before him. He didn’t get stuck in one spot, but for the joy, watch this camera. See. Let me tell you how good they are. I can come down here or over here. I can turn around and hit this camera. Look how trained they are. It is an anticipatory spirit.

The thing that faith and fear both share in common is they are empowered by anticipation. So, you wake up in the morning. And if you frame your day with the anticipation of depression and discouragement, some of you have framed your day to suck before it ever gets started. “I’ve got a tough week coming up.” I guess you do, you’ve framed it that way. I wouldn’t want to be you this week either. Not the way you’re talking. Plus, the worlds were framed by what was spoken.

So when you say it’s going to be a tough week, you’re speaking something that you’re going to see but it came out of your mouth. And so the Psalmist had the right idea. He said, “This is the day that the Lord has made.” What’s he doing? He’s framing his day. I will rejoice and be glad in it. Well, what are you glad about? I don’t know yet, but I will be glad.