Steven Furtick - How To Come Out Of This Year Stronger 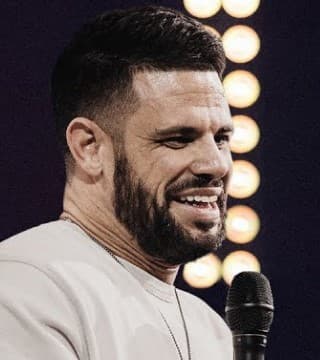 As you look back over what happened to you and for you this year, there may be a temptation for you to reflect to the point of resentment. There may be some people this year who were supposed to support you, and maybe you expected them to be standing by you, but you find yourself a little more lonely at the end of this year. Even going through your photo stream on your phone, I found, can be dangerous. Some of the people I'm scrolling through who I felt one way about in January I feel differently about in December. You have to be careful if you want to go back on the timeline.

You may feel some things. When you reflect, it's important that you avoid resentment on one level, but I think also you should be very careful when you reflect, because not only can you begin to resent opportunities you didn't get or maybe ways you were not acknowledged, which can bring you into a state of resentment, but you also have to watch out for regret. This is like the Devil's R&R: regret and resentment. They're really the same. Regret is just resentment turned inward. It's when you take a look at where you said you would be on December 31, 2017, and the scale says something different than your list said 365 ago. Or it can be when you are thinking about all of the dance recitals you missed. Or it could be that you think about how you promised to be more faithful in church this year, but you didn't quite make it happen, but you did get here tonight.

High-five your neighbor and say, "You're ahead for 2018. You already have a gold star on the Jesus Christ chart". There is a type of reflection that leads to regret, there is a type of reflection that leads to resentment, but the right kind of reflection will lead to resolution. The right kind of reflection, as demonstrated by the apostle Paul in Philippians 1 from, I believe, a Roman prison cell, which was really a rented home where he was allowed to see people… Remember now, he has been waiting for a trial for maybe as much as four years, and after four years of bouncing around from prelate to prelate, from governor to governor, there's still no resolution for his situation, yet Paul exhibits the kind of attitude in Philippians 1 that I am striving to see manifest in my own life.

You can almost hear them whispering from the church at Philippi, which Paul founded a decade earlier, but now some things have happened. Not only has time passed, but it seems that Paul's ministry has come to a grinding halt. There is to be no more movement during this period. I can almost hear the whispers from the church at Philippi when Paul speaks up in verse 12 and says, "Now I want you to know, brothers and sisters, that what has happened to me has actually…" I know what you heard, but forget what you heard for a minute. Let me set the record straight. I hear the Spirit of the Lord saying tonight that before you leave 2017 you need to set the record straight about what really went down this year. You need to set the record straight.

One thing I'm trying to do… Before I make a New Year's resolution I want to make a few revisions. Paul wants to make a few revisions. Let's talk for a moment about the revision. I've noticed a lot of times that when we write a song or when I write a sermon the magic happens not on the first draft or the second draft or the third draft, but it is in the revision that the potential of the song or the sermon is revealed. I love that, because when I think about it, I think maybe there are some things this year where I'm getting the story wrong and I need to see it differently. "It's not looking good for Paul. It doesn't look like he's going to make it". It's embarrassing when your pastor is in jail, I would imagine. I hope you never have to find out firsthand what that's like. I'm not planning that.

Remember now, he has been driven across the Adriatic Sea. Three months in Malta. Now he finds himself in Rome, and he's still waiting, and the situation is still unresolved, but he's not. Resolution is not an event; it is a decision. As Paul reflects from Rome and looks at what's happening, he understands that sometimes people will misjudge your situation because they do not know the backstory, so he is taking the opportunity to inform them about what is apparent and what is actual. I love it, because sometimes what's happening on the surface is not the real story.

Now I didn't like it at the time. I didn't get it at the time. It didn't make sense while I was in it, but I've been here long enough to recognize, and I've been through enough storms to know… I held on to the planks of the boat and made it across the sea and saw God's provision at a level that now I can tell you that, actually, God is up to something. Paul says, "I'm not a hostage". I want you to say that, because this is a revision you need to make. Some of you have made yourself the victim of 2017, and we need to make some revisions.

You cannot leave 2017 like a victim and go into 2018 like a victor. You have to make a decision tonight. You have to revise some of the stuff in your story and take a cue from Paul. I was confused at first, because he said, "I want you to know, brothers and sisters, that what has happened to me…" but then he gives no detail about what actually happened to him. All he talks about is what God did through the events he could have been bitter about. "I'm not a hostage. Don't feel sorry for me. In fact," Paul might say, "I always wanted to go to Rome to preach the gospel. I didn't think I'd have to drag these shackles through the streets to do it, but it actually works out pretty well, because all of these guards have to listen to me preach anytime I open my mouth".

You'd better shove your neighbor right now and say, "I'm not a hostage; I'm a weapon formed in the fire, held steady in the hand of God, and aimed at the darkness"! Somebody shout, "I'm a weapon"! Watch out, Devil! Every time you cut on me you make me sharper. I'm loaded now. I'm focused now. I'm aimed now. I know what matters now. It feels like the Spirit of God is breaking out on this side of the church. Somebody thought they were trapped. It's not you who's trapped; it's the Enemy. You have the Devil on the run. Don't you back down! "Let's set the record straight. I came here in chains, but because I'm here somebody is going to get set free". "God put me here, not Caesar, not Festus. It wasn't the boat that brought me here; it was the purpose of God".