Steven Furtick - God Can Handle It 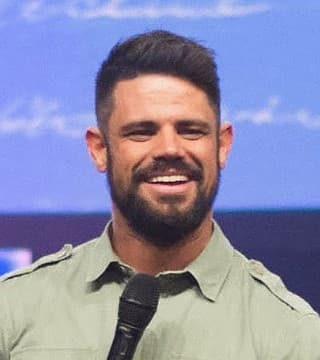 There's a kind of faith that is very dangerous. I'll show you two extremes here, and both are warned against in Romans, chapter 4. Sometimes there is a version of faith that looks more like denial. Then there is the absence of faith, which creates despair. What I see in Romans, chapter 4, front and center, from the father of faith, is that he was able to avoid both extremes. It says in verse 19, "Without weakening in his faith, he faced the fact…" That one phrase helps me understand what faith is and what faith isn't. The kind of faith I am to emulate from my father Abraham, whose seed I am, is not a sort of denial. I'm putting that before you because when we teach about being positive, it doesn't mean that everything in your life is positive, and I want you to know that.

Do you know you can tell God that and he won't hold it against you? When God spoke to Abraham and said, "I'm going to give you a seed that's going to be your son, and out of your seed is going to come a nation as numerous as the stars," Abraham laughed in God's face. It didn't bother God, because faith is not a feeling; faith is a decision. I'm going to say it again to counteract all the wrong thinking you've ever had in your life about faith. Faith is not a feeling. You can be a pessimistic person but still have great faith. Even great faith has weak moments.

Faith is standing in the middle and making a decision that it is what it is, but it's not what it seems. I have that beneath-the-surface faith. I have that Saturday faith, waiting on something to come up out of a tomb and resurrect for the healing and salvation of the world. He narrated his situation with his faith, so he became the father of many nations, and we are his seed. How cool is that? We are the seed of Abraham. Seed. That made me think about something. Will you think with me today? When Jesus was trying to explain to the people what the kingdom of God was like, he said in Mark, chapter 4, verse 31, "The kingdom of heaven is like a skyscraper, big and bold, massive, a towering structure".

You can tell your neighbor, "You have trees in your pocket". That's what God was telling Abraham. "I put a seed in you. I put a promise in you. I put a purpose in you. I put potential in you. Don't judge the tree by the size of the seed, because when it's grown it's going to look like something you can't even imagine right now". So he says, "Can you see the tree in the seed"? This is the question of faith. Can you see the hope of the world in a barren womb? Can you see leadership potential in your rebellious child? Can you see how it might have been a blessing that one person walked out of your life? They say we miss the forest for the trees, but sometimes I think we miss the trees for the seeds. Elijah sends his servant up. He's like, "Hey, check it out, because it's about to rain". The servant comes back down and says, "There is nothing there". He said, "Go and look again".

Elijah is doing something kind of weird while he's sending his servant back and forth, because he sends him six times. The Bible says… I'm not going to attempt to demonstrate this, because my flexibility is limited, but he put his head between his knees. I think it's because if he looked at the sky, if he looked at the situation, if he went by sight… The Bible says we walk by faith and not by sight. He had to close his eyes to what was there in order to see what would be. Finally, after six times, on the seventh time his little servant came back and said, "Well, there's a cloud up there, but it's only about the size of a man's hand". "To what shall I compare the kingdom of heaven? It's like a seed, a cloud the size of a man's hand. It's like a mustard seed". That's the smallest seed they knew of at the time. "Yet when planted, it grows".

Tell somebody, "I'm growing. I'm growing. My faith is growing. My heart is growing. My capacity to love is growing". But the thing about the growth of the seed is… Do y'all hate when I holler like that? I know some of y'all wish I didn't do it, but I watched some basketball games during the Final Four and the NBA play-offs. I watched all kinds of fans get up with their shirts off and their chests painted and jump around about some men in some shorts running up and down a hardwood floor. I just figure our faith ought to be enough…

Jesus said, "I have to go to the cross. I have to be crucified, and they're going to bury me in the ground". That's one narration of what happened when they put Jesus in a borrowed tomb. He was buried. But guess what? Jesus said, "When they put me in the ground, I'm not being buried. I'm being planted to produce a harvest". Touch somebody and say, "I'm planted". It does not appear yet what I shall be, but when you see me I'm going to look more like him. I have news for you. It is what it is, but it's not what it was, and your eyes have not seen what it's going to be. Shout if you believe it!