Steven Furtick - Are You Out of Order? 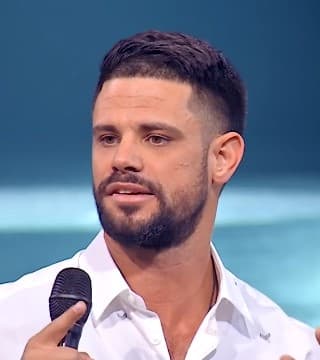 When you say God orders your steps, understand what you're saying is not that God will take the step for you; it's that he will tell you which one to take. So when I asked God to heal my relationship with my dad, God did not do it until I submitted to the way he wanted me to do it, which was to humble myself and go in to my dad and, instead of proving how right I was and how wrong he was, to find a point of connection. That required submission. When I submitted myself to God's way, I experienced God's will.

A lot of the things that are not working in my life are because I'm out of order. Sometimes when your finances are out of order you have the money you need; it's just not in order. It's because God is really not first in your priorities. I can tell by your ledger. I can tell because everybody else gets your first and God gets what's left. When you give God your best he blesses what's left. When you give God what's left, how can you believe him for his best? You're out of order. The three times that Holly and I have fought in 15 years of marriage… I might be understating, but when we fight it's not because we don't have a blessed marriage. It's because something is out of order. There's a step I'm skipping.

When I talk to my wife and I need to work something out, the thing I have to do before I can explain myself is to empathize, which does not come naturally to me, to listen to your wrong point of view before I give you the correct one, but sometimes there's something I need to learn about how you see it so I can come over onto your side. That's why we have so much racial and religious tension in our nation. We're out of order. Before we even listen to one another we're giving a lesson to the other, but you can't give the lesson until you're willing to listen. We're out of order.

Now we're frustrated because it's not working and we don't know what to do. David's life is a life… It's interesting how when he was in order everything had a flow to it. The oil flows when you are in order. The Bible says he inquired of the Lord, "Shall I go up to one of the cities of Judah?" which was not, by the way, the ultimate capital, because everything God does he does in steps and stages. It would be seven and a half more years before David would come into the fullness of his calling. All you need for now is the next step. David had been making moves. He had been working toward this moment where he would go to Judah, and he had sent the men of Judah gifts, and he was set up now. He asked God, "Is now the time? Because I don't want to move until you want me to move".

In one sentence God taught him his next move, because for 15 years God had taught him to submit. If you can receive this message today and submit your desires, God will tell you what to do when you delight yourself in his way. That's what Psalm 37 says, that he delighteth in his way. I'm so stupid. I thought that meant for the longest time… I don't know why I can't get this stuff the first time. I thought that meant God delights in his way. "The steps of a good man are ordered by the Lord, and he delighteth in his way".

I thought that meant that if I'm a good man and my steps are ordered God will delight… Well, of course God delights in the way that he orders. That doesn't make any sense. It means that when I delight in his way… See, "He delighteth in his way". Who's he? The man whose steps are ordered. When I delight in God's way, I will be in God's will, and my steps will be ordered. I can stay on this step as long as I need to stay on this step, and I can stay in this season as long as I need to be in this season. "God, I don't want to go into any greater responsibility or influence until you say I'm ready. I don't want to come out of this oven until I'm ready. I don't want to enter into the promotion until I'm ready. When you say step, I step, and my steps are ordered".

It's a statement of submission, but it's also a statement of sequence. When you get her number, not only do you need the right digits but they need to be in the right order, because if she gives you the right digits in the wrong order you'll be calling the wrong girl, sounding like a stalker. "Hey, remember I met you Thursday night"? She's going to hang up on you, because it has to be in order. David couldn't be a king until he learned to be a shepherd, because there was something he needed to get at the bottom that would enable him to be who he needed to be at the top. Somebody shout, "My steps are ordered"! That means God not only knows where but he knows what and when.

Now I can trust him, because I have it when I need it. I was thinking about something the other day, how if I had known this 15 years ago how good it would have been, and I felt that voice in me. It wasn't out loud like David, where God just speaks to you in complete sentences. It was an impression that God said, "You wouldn't have known what to do with it 15 years ago. It took 15 years of your foolishness to even respect what I wanted to show you". This is what I mean when I say my steps are ordered. I mean that not only are the steps that feel like this ordered but so are these. You can't have one without the other.

To say "My steps are ordered" means that not only does promotion not come from the east or the west but comes from the Lord but sometimes the pain comes from him too. My steps are ordered. God knows which is step three and which is step one and which is step four, and if I start skipping steps I'm likely to end up on my face, which is the next thing David said in Psalm 37:24. He said, "Though he fall, he shall not be utterly cast down, for the Lord upholdeth him with his hand". It means my confidence is not in the stability of my feet; my confidence is in the sovereignty of his hand.

Some of you feel like you're going down today, but you're still in order. God's order isn't like your order. Peter said, "Jesus, you can't go to the cross yet. You can't let them kill you yet. They can't kill you until you establish the kingdom". Jesus said, "No, I can't establish the kingdom until they kill me, because I have to go down, like Jonah went down, to the belly of the earth three days. That's the only way I can rise". My steps are ordered. My right steps, wrong steps, left steps, right steps. My steps are ordered.

That's part of the reason LJ makes me so sick. I don't mean to do this in front of everybody, but I'm jealous of his talent, because we both play music but he plays it so much better than I do. I can play a little bit, but after about 10 minutes I will have exhausted my knowledge of what I know to play. This guy took lessons the right way. My mom sent me to lessons, but I didn't learn the right way. It was my fault. It wasn't her fault or the teacher's fault or anything like that. I wanted to learn certain songs. I wanted to learn "Every Rose Has Its Thorn". So I learned it, but I didn't learn the theory. I just learned how to make the chords, but I didn't know how the chords functioned together.

That's Saul's problem. He got to be king too soon. He didn't have a chance to keep sheep while he was waiting to be king. That's the advantage… LJ learned all of the scales and the pentatonic scale and the modes and all of the other things I didn't pay attention to that I was supposed to know. I just learned a G chord, and he learned… Show them a scale or something. See? Doesn't that make you sick?

How many of you took piano lessons and he makes you sick? He makes me sick. He can just play stuff. Just play a few notes, anything you want to play. Okay, do it again. Do those same notes, but do them differently, like a different order or something. Do it again. All right, do it again. Don't change any of the notes. Do the same notes but do it in a different order. Maybe switch the instrument. Do an electric guitar sound or something like that, something a little more interesting. Yeah, like that. Do it again in a different order. Yeah, I like that. Now go up. Go up again, and then back down to the first one. Lock it in right there. A little faster. Minor six, four, five, and one. That sounds like something. Same notes he was playing before but now with movement and order.

Shift, sequence, order. If you know it, you ought to sing. Those are the same notes he started playing, but when he got them in order… I feel somebody's life getting in order today. I feel somebody's steps getting in order. I'm trying to show you that everything you need is in your life and your steps are ordered. If I'm going up or if I'm going down my steps are ordered.