Steven Furtick - Why Do I Still Struggle With This? 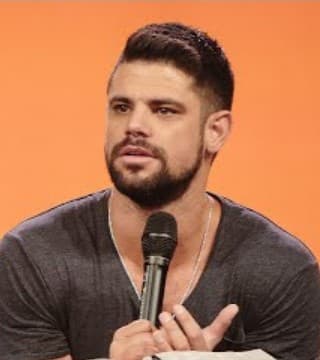 You represent the thorn. I'm sorry about that, but somebody had to do it. You represent the frustration. Paul said, "There was a frustration that had been with me, and it had been recurring, and a frustration that wouldn't leave me alone, so I took it to a spiritual place. I took it to God, and I asked God, 'Please take it away.' I looked after I prayed, and it didn't go away, so I turned around and prayed again a little while later, and I asked God, 'No, I'm serious. If you would take this away, I could get more done.'"

Now Paul does something he doesn't do in any of his other epistles. Usually, when Paul says "the Lord," he uses the Greek word kyrios. That means God the Father. This time, he uses a designation in Greek. It's ho kyrios. He went directly to Jesus, because a little thing can hurt bad enough that you dispense with the formalities and all the church talk and all the church language and just get to the point where you are so sick of yourself. Forget about being sick of everybody else.

Sometimes… In fact, many times, when it came time for the prayer requests, the predominate prayer request in the circle was a little something called… This is for when you have something you want to talk about, but you don't want to talk about it. When it comes to you in the circle, and it comes time for your prayer request, you say… This is something we used a lot, Bernie. You say, "I have an unspoken". That's deep right there. "What I'm going through is so crazy, y'all can't even handle it, so I'm just going to leave it unspoken, because if I told you that I'm in love with Jenny and she won't talk to me, it would freak you out".

Wade Joye, our worship pastor, was telling me last night that he used to use the unspoken as a dating technique because there would typically be a girl in his youth group, and he would like her. He would want her to know he was praying about their relationship, but he couldn't say it out loud, so when it came time for Wade to pray, he would say, "I have an unspoken," and then kind of… "I can't even mention your name, girl". He said, "I have an unspoken".

The greatest frustrations of life are unspoken. You speak in code about what is really bothering you, about what you're really thinking about doing, about what you really wrestle against. You develop ways to talk about it. "Let's call it a thorn. Let's call it an issue. I have an issue. I'm going through something right now. I'm dealing with some things". Here's what we say. We say, "It's just a lot right now. I can't even break it down. I can't even tell you all it is, because if I started telling you all it is, I know that somewhere along the way, as I went deeper and deeper and deeper into what I deal with, you would lose respect for me. I'm going to keep it up here. Even though I'm willing to tell you about a lot of what I go through, there are some things you don't have any business knowing about, and if I would have wanted you to know about them, I would have told you, but this one is going to stay at the throne. I took 11 chapters to show you my frustration so you could feel it, but when it comes to this thing, let's call it a thing. Let's call it a thorn".

Then Paul taught me what to do about it because I have some thorns. I know you don't. I know you've passed. You've graduated. I know you're more spiritual than Saint Paul, but Paul and I have problems. He taught me something very… See, I am an easily frustrated person. If they made a chart about what it would take to frustrate you, my frustration kicks into 10 when the situation is a one. How many of you can relate to me? Especially if it involves anything mechanical. I marvel at the patience of anyone who can install anything. I worship you. I honor you. I'm very easily frustrated. I'm very easily frustrated with a video game. I could be up 49 to nothing on Madden and let them kick a field goal, and I'll drop the controller in anger. I don't know what it is.

If you don't want to leave, then we have to get to work together. Hello, frustration. I fought you long enough. I ran away from you long enough. Now it's time to face you and see how God wants to use you to accomplish his purpose in my life". Come on. If you're going to stand there, do something. Hold my stuff. If you're going to frustrate me, Devil, then at least bring me a reminder of the grace of God. If you're going to try to run me off from what God has called me to do… He said, "I was given a thorn in my flesh". The word given is interesting because that speaks of something that is desired. Right? Usually. There are exceptions. You don't say, "I was given a shotgun wound". He said, "God was taking me higher and higher and higher and higher". He also said that 14 years before this experience he was taken into heaven and he was shown things so beautiful that he couldn't even talk about it.

It's amazing because now he has something that is so beautiful that he can't even talk about it and something that is so broken that he can't talk about it, all operating in the same life. Something so incredible and something he is inflicted with, and both are unspeakable. To know a life of ever-increasing faith in God is to know a life of ever-increasing frustration. I'm just going to get it out there. To be faithful is to be frustrated. I think the reason he called it a gift, the reason he put it in that exact terminology, is because he said, "After a while, I realized that if God was going to do great things in my life he needed to find a way to keep me grounded".

I taught a leadership lesson one time called How Do the Gifted Stay Grounded? How do those who have been gifted by God with great abilities stay grounded in their attitude? God does it through the affliction he allows. Although he says the thorn was a gift, he does not say it came from God. He says it was a messenger of Satan. It did not come from God, but by the end of his exposition of his thoughts about it, he said it was a gift from God. I don't understand this unless I put it in the following terms and terminologies. I see it this way. I see that the messenger was from Satan, but the message was from God. The temptation, the hardships, the opponents, the rejection, and the need. Those are the five things I put because if you take the first letters, it spells thorn. The temptation, the hardship, the opposition, the rejection, and the need. These are all things Paul mentions in 2 Corinthians.

If you go throughout it, he mentions all of them. He says, "Who is led into sin, and I do not inwardly burn"? That's temptation. He says, "I was throttled by the Jews". That's hardship. He says, "I was opposed by people who should have supported me". That's the opposition. He says, "I was rejected by you Corinthians who I shouldn't have to prove myself to, but I do". He said, "There was a need so great, and I couldn't meet it, and I was so frustrated by my own limitations. Then I got this thorn, and it was sent by Satan, but it carried a message from God". The message was, "My grace is enough". Could life be bringing you a God message through a Devil situation? Could life be trying to deliver to you right now a gift from God wrapped in the package of an attack by the Enemy?

He went to the cross, and Jesus wore a crown of thorns. The thing they pressed into the crown of his head was the thing that made the blood flow down to his feet that brought the redemption that cleanses all of us who will believe in his name. It was the... thorn. It was the thing that brought him pain that brought God glory. Paul said, "You have to come to a point in your life that when it's all said and done, you say, 'Okay, God. Okay. Take my frustration and turn it into greatness.'" Can I tell you a secret? The only way to greatness is through frustration. The only way to greatness is through frustration. Frustration is the only thing that can make you great, because if you weren't frustrated you would be complacent.