Steven Furtick - When Your Doubt Trips You Up 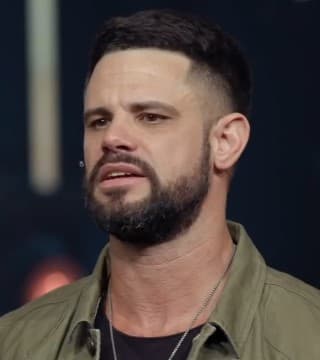 One of the most disturbing questions in the Bible is in Matthew, chapter 11. What makes it so disturbing isn't necessarily the content of the question but who it came from. In Matthew, chapter 11, a question was asked of Jesus, and this is just in verse 3. "Are you the one who is to come, or should we expect someone else"? That question wouldn't bother me if it came from Nicodemus. He was a religious ruler who came to Jesus at night for fear of being put out of the synagogue, and he wanted to understand about being born again. It wouldn't bother me so much if that message came from the woman who was caught in the act of adultery or the Samaritan woman at the well who really didn't see the gospel the same way the Jewish people did. It wouldn't bother me even if it came from Peter, who was always saying stupid stuff. Peter is that kid you just tune out.

What makes that question so disturbing to me is that it came from the mouth of John. The same one who pointed him out came to a place where he started to doubt. "Are you really the one"? We can't talk about these things because all of the A-plus, gold-star Christians will start to judge us in the comments section if we do. "I never doubt," they say. Isn't it interesting that the disciple who said that kind of thing at the Last Supper of Christ was the one who denied ever knowing him before the rooster crowed?

The conclusion you come to is based in the belief you start with. If you start by believing the proof of your faith is that you never experience doubt, then the moment you experience doubt, your faith will fall apart. I hope this sets you free today to know that John, the one who pointed and said, "Look! The Lamb of God…" He was the first one. You have to get this. You really have to stop and think about it. You can't multitask this message and really get it. This is the one who announced, "This is the one," and now the one who announced it is asking. The one who made the announcement is now asking the question he had been answering just a year ago. He has been in prison for a year, and he's only getting secondhand reports on what Jesus is doing.

When you don't experience it firsthand, when you just hear about it, when you can't really see it, and you can't see the big picture, and you're kind of trapped in this place, it gets kind of hard to believe it, so then you start to believe different things. You start to forget what God showed you in the Spirit, and you start trying to figure it out in your mind. Now wait a minute. John said he was coming to judge with fire, but when they brought him a report about Jesus… Look at what Jesus told him. Matthew 11:5: "Go back and report to John what you hear and see: The blind receive sight, the lame walk, those who have leprosy are cleansed, the deaf hear, the dead are raised, and the good news is proclaimed to the poor". But John wasn't expecting that. He was expecting judgment. So now he wants to know, "Are you the one"?

When you believe God is a certain way and he has the audacity not to conform to the biography you created with your belief… Then you experience something you never expected. You come to the conclusion that he's not with you, because the belief you started with was that his presence would always accommodate your preferences. So, I've been asking the question in my prayer time lately, "God, what are the things I have been believing that are not true"? We don't know the difference anymore between the truth and our belief. We think that because we believe it, that makes it true. I can jump off this stage right now and land on my head, and I can believe that the Lord will uphold me, and I will break my neck on international Internet television for all of you to see that the truth has no respect for my wrong belief.

I believe he does. Matthew 11:6: "Blessed is anyone who does not stumble on account of me". "Tell John that. Tell John, 'Don't stumble.' Tell John, just like he went first in life, he's going to go first in death". John went on to give his life in prison for the cause of righteousness. Jesus didn't assure him with a sweet platitude. Jesus didn't assure him with a Pinterest link. Jesus didn't assure him with something that rhymed. He said, "Blessed is the one who does not…" The word in Greek is skandalon. In the NIV they call it does not stumble, or a few other definitions to describe what happens to us when we run into something in our lives that doesn't match what we thought would happen: It means to trip up, to entice. It means, literally, a stumbling block that may cause you to trip and fall or to fall away.

I see it like a picture, so let me use your stool. This may be too simple for you, but Jesus told John… This is skandalon. This is offense. This is a stumbling block. This is the thing that is getting in the way of you moving forward in your faith in this season of your life against the odds. This is the thing. Jesus says to John, "Don't trip". What did you say? You want to come show me? Come on up and show me what you just said. I wondered who would get it, because this is how I saw it. He said, "Don't trip, John. Just…" That's how I saw it in my head. He said, "Get a good base and just… John, just like you were doing in your mother's womb…" Somebody say, "Jump, John". That is something that can make you fall, but it is also something that can strengthen your faith.

"Jump, John. Keep jumping. You know what's true. You know who I am. You saw me before you knew me. You saw the Spirit like a dove. Don't get tired in this place. Don't get tired in this trial. Don't trip, John! Just jump! You know what to do. Just jump, John, and keep jumping"! As a matter of fact, one scholar said that when Luke said the baby jumped in the womb of Elizabeth, it was echoing when David brought the ark back to Jerusalem, and when he got the presence of God…six steps…guess what he did. He started jumping. "I have the presence of God back. I have the provision of God working in my house. I have the favor". God said, "Jump. Jump, John! If you believe you're still blessed, jump, John! These chains can't keep you from jumping. Jump, John, jump"! "Tell John, 'It would be a shame for you to trip over something that's not even true.'"

All week long, I want you jumping. Your calf muscles are going to look like they got bowling ball implants when you come back to church next week. This week, I'm jumping to a new conclusion. I used to believe I wasn't enough. When I found out that his Spirit in me is the same Spirit who raised Christ from the dead, now that I believe that… The belief I start with in every situation determines the conclusion I come to. Jesus said to John, and he says to you, "Stop tripping over things that aren't true". In John's case, he needed an upgraded expectation of the kingdom of God, and he would get one if he didn't trip. Are you tripping lately? Are you tripping over stuff that isn't even true?