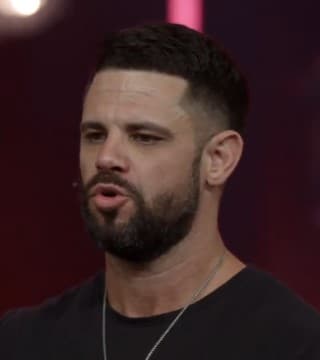 Hear me today. I don't know who this is for. You've been in a lonely place. It's a lonely place. Not just a little bored…a lonely place. You think this message is just for single people? It's not. I think it's the loneliest thing in the world to have people around you, but you can't really touch them and connect with them for who you really are because you just keep trying to give them who you think you're supposed to be. That's a lonely place.

God gave me a word for you today in the lonely place. He said, "I will". And then he did. He didn't just speak it. He didn't just say it. He demonstrated it. "Be clean". And he touched the man. Remember what I told you? If the clean touches the unclean, the clean becomes unclean. But this is not just any priest. We don't come to a high priest who is unable to be touched by the feeling of our infirmity. One of the first things leprosy would attack was your ability to feel. One of the first indications that you had leprosy wasn't on your skin; it was the fact that you lost the ability to feel. It's a bacterial infection that touches the nervous system.

Touch them, God. They've been in a lonely place. They don't even like themselves anymore, but touch them, God. They're so sick of this, God, but touch them. They're wondering "How much longer? God, will my kids ever go back to school? Will I ever be able to go out again"? Touch them like you touched that man. Touch them beyond the issues they face and remind them that you came to touch what others would push away. You are not intimidated by our spots. O God, whatever has been keeping them at a distance, I pray that they would have the courage to come close to you today.

Leviticus 13:45 says anyone who has this defiling disease on their skin has to wear torn clothes. We do that by choice now for fashion. All of these little worship leaders with their skinny jeans and the holes. But when you dressed in these clothes, it was to identify you from a distance as somebody who couldn't come close. You identify yourself as someone who can't get close. Some of you can't get close to others. You can't get close to God. You can't really pray because you're not even praying about the real things. You're pretending to be somebody in God's presence that you're not, and he can't touch that. These lepers were identifiable from a distance because their clothes were torn.

The Bible says they had to have unkempt hair. I was like, "Dang. This is like it was written in 2020". Do you see it? All of the barbershops were closed. The Bible says that these lepers… This gives us a picture of what the man had to live like. Unkempt hair, torn clothes, and they had to cover the lower part of their face. The Bible is not relevant, is it? The Bible is very relevant to the moment we're in. You have to cover your face and cry out with your mouth, "Unclean! Unclean"! "As long as they have the disease they remain unclean. They must live alone". When this passage started, the leper was in a very lonely place, identified by his issues, and that's where some of you have been. What brought a tear to my eye is how the passage ended.

The Bible said that when Jesus healed the man, he told him, "Don't tell anyone what I did for you". That's the opposite of what we teach you in church. We tell you to click "Share," and if you have a testimony, and praise the Lord, and what has he done for you. But Jesus was governed by purpose, and he knew that if people started coming to him just to perform external miracles, it would miss the intention for which he came. When he told the man not to tell anyone, the Bible says he gave him a strong warning. The Hebrew image here is that his nostrils flared. Have y'all ever heard of savage Jesus? How about snorting Jesus?

I know y'all saw sweet Jesus; sweet little baby, six to eight pounds, six ounces Jesus; superstitious Jesus; Little Stitches Jesus. I know you've seen all of those Jesuses, but this is snorting Jesus. He gave the man a warning. He said, "Don't tell anybody what I did". The first thing the man did after he got healed was go tell everyone. I thought, "Well, now, come on, Jesus. You know the future. You knew the man was going to go tell everybody and it was going to cause you to have to go out, and it was going to cause you to have to move on, and he went and did exactly what you told him not to do. You knew he was going to be disobedient. Why did you heal him"? He said, "I wanted to let you know I'll do it anyway".

I have some obnoxious parts of my personality, but he likes me with rough edges. He's a carpenter. He's going to do it. He's a carpenter. He needs something to work on. He needs an object lesson. He needs something that looks so unclean. He needs somebody so messy. He needs a situation so desperate that he can say, "This is what I came to do". When the passage started, the leper was in a lonely place. This man runs around running his mouth, telling everybody about Jesus, and now everybody wants to come see him. But Jesus didn't come for that. He came for something deeper. He didn't come just to fix what's on the surface level.

Some of you are sitting in a loneliness that was not chosen in this season of your life. This is my message today. "He stayed in lonely places, yet the people still came to him from everywhere". God said to tell you he'll meet you in your lonely place. Lift your hands. He said, "You don't have to hide that from me. I'm willing to touch you. You don't have to stay away from me. You might be having to distance from people right now, but you can just come closer to me". He's near to the brokenhearted. He gave us a gospel lesson that he went outside the camp so we could come in, that he became sin who knew no sin that we might become the righteousness of God. He said he wants to meet you in your lonely place. You know that place? You know that spot? You know that thing you keep trying to fix and you can't? He said, "I want to meet you in your lonely place".