Steven Furtick - What Was I Put Here For? 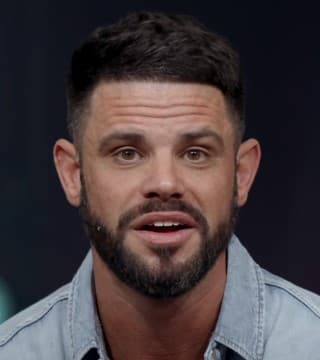 The moment you say, "What is wrong with me?" here comes every demon from the time that you were conscious, and they will line up with a list. "What's wrong with you? Okay. Where do you want me to start? Let's start with your physical appearance. Okay". It's the wrong question. How many of y'all are like me? "What's wrong with me? What's my problem? How could I be so stupid, so stupid, so stupid"? The Devil is like, "I can tell you how you can be so stupid. Your dad was stupid". The Devil has a list. He'll show you everything from your genetics to your jawline, but your questions direct the integrity of your thoughts.

When Paul asks in Philippians 1:18, "…what does it matter?" he is setting the direction of his thoughts by controlling the focus of his priorities. What does it matter? In his case, he's talking about some people who are using his uniquely vulnerable situation as an apostle who is in chains to capitalize on the situation. He's like, "It doesn't matter". I want to go, "Yes, it does," because there's something in me that always wants to… I'm really quick to get offended. I'm just getting it out there and telling you like it is.

It's easier to preach when I'm not up here hiding stuff from you. I am quick to get offended, and I found out offense blocks my flow. I don't like it. I don't like it. I kind of wished I would have talked to Paul sooner, because he could have saved me so much time if he would have taught me that human opinion doesn't matter as much as I think it does. It really changes through the years. When you're in middle school, this is your biggest question about everything from how you dress to what you say to what you don't say. "How can I fit in"?

Then, you go to apply for college. They're going to teach you how to put something on your application so you can stand out. "I don't know what to do! The questions are changing". When I started the church, it was like, "How can I get people here"? Then, people started coming, and I was like, "How can I keep doing this over and over again so I don't let anybody down"? The questions are shifting, but I want you to notice that before he can get into what it means about what you're going through and where is God in my situation… "God, what do you want me to do"?

The first question is… What does it matter? What does it matter? I get so distracted. I get so distracted. My focus gets so broken. It's actually even hard for me to sometimes look around the room when I'm preaching, because if somebody looks like… I remember one time a guy looked really mad when I was preaching. It put me in an anger vibe. I started pulling out Bible verses about wrath and judgment and the second death. I didn't even know I knew those verses. I was just going for it. They got word to me later. They said, "That man was going through a divorce". I said, "Oh, okay! So I misinterpreted the situation," because I was asking the wrong question. I was looking at him going, "Why does he hate me"? Really, he hated his situation. I asked the wrong question. I was starting with them. "Why do they always…"?

To realize in this moment the only thing that matters to me is that you connect to God and get the word that he has for you. I will do anything to get it across. I'll do camera tricks and camera angles. I'll run around the stage. I would do anything to get it across because I have come past the point in my ministry now of thinking the goal is to be impressive. The goal is not for me to impress you. It is to connect you to heaven. If I connect you to heaven, the ministry will flow through me, and all of our needs will be met, but it takes you a little while to find out what matters, and usually you don't even realize how much it matters until after it happened.

Isn't that sad? You think the wrong thing matters until after it's over. Then you realize it wasn't really that important. It really wasn't that important. I'm asking God to help me decide in advance what my distractions are. Here's what Paul taught me. Not every disruption is a distraction. Remember, this is the apostle that is taking the gospel to the world, planting churches, and all that progress has stopped…apparently. Paul said, "Actually, the gospel is moving forward". He decided what mattered. Did you or did you outsource your priorities to a broken world who doesn't know its right from its left or its up from its down? What does it matter? What does it matter?

If we could have talked to Paul when we were starting the church, how much time could we have saved worrying about stuff that didn't matter? Y'all, I got so possessed by this verse a couple of years ago I made bracelets for the whole church. Instead of WWJD, I made a WDIM (what does it matter) bracelet, but do you know what? It's not if it's on a bracelet. It's in your brain. It is your thoughts, and I'm still asking it. Does it really matter? Does it really matter? Somebody told me you should the day and decade test. I was like, "What is that"? They were like, "Well, if it won't matter in a day or in a decade, don't worry about it".

That didn't help me too much, but here's what did help me. I didn't really get what they were trying to say, but here's what did help me. I did some flashbacks to stuff that frustrated me so badly and to some stuff that had me so afraid that never happened. As I was doing those flashbacks and realizing God's faithfulness, it was an exercise for me. It was an exercise in asking a better question. The question, "What does it matter?" will eliminate 95 percent of my prayer requests. Just by asking God, "Give me your priorities," it will direct my resources, but it will start with the question. It is a clarifying question.

Make it blurry, Abraham. Come on, Abraham. You remember Abraham and Sarah in the Bible. This is kind of crazy. In Genesis 18, Sarah was laughing because God said that she was going to have a baby. This is Genesis 18:12. It says, "So Sarah laughed to herself…" She didn't LOL. She LTH. Do you see it in the Scripture? She laughed to herself. Look at this. She said, "After I am worn out and my lord is old, will I now have this pleasure"? "I don't see how this could happen now"! Then, the Lord said to Abraham, "Take it". Why did Sarah laugh and say, "Will I really have a child now that I am old"? Here's a better question. "Is anything too hard for the Lord"?

Let's talk about that phrase. Who put this table here? You don't even know. What was it put it here for? That's the important thing. Yeah! It was put here so I could preach. Write this down. Who put it here isn't as important as why it was put here. When Paul says, "I am put here for the defense of the gospel," he could have just as easily said, "I was put here by Caesar because Rome is so wicked," but he didn't say any of that. He said, "Rome might be the reason I got here from a human standpoint…"

What you were put here for matters more than who you were put here by. I don't know. I just feel like God is anointing this message. God said, "Put a shrug emoji in the chat". He said, "That is the official emoji of heaven over most of the stuff you're stressed about". The Lord said, "I need you to make an I-don't-care list," a list of, "I'm going to quit caring about this so I can focus on that," because I cannot care about everything. You know that. Right? You know you were not designed to care about everything. "Well, if you don't watch the news all of the time how are you going to be informed"?

I have a flip phone, because sometimes I just can't care about and process everything all of the time, because it matters more to me to be available to God than accessible to everyone else, so I just can't care about everything. What does it matter? People sometimes ask me, "Did you see what they said"? I'm like, "Nope". They're like, "Do you want to know"? "Nope". "I saw this thing about you. Do you want to hear"? "No. I don't want to hear". Ctrl+Alt+Del. Ctrl+Alt+Del. It's a spiritual command function. Right? Ctrl+Alt+Del. I have to change some priorities if I am going to expect God's resources, and they are connected.

When Paul says, "I expect that through your prayers and the provision of God's Spirit that what has happened to me will turn out for my deliverance," that doesn't happen unless he correctly answers the question, "What does it matter"? What does it matter the stupid stuff? It set me free because I used to think I'd embarrass myself. I'd be like, "Oh, man! I said this or that. I'm embarrassed". They don't care. People are paying way too much attention to themselves to care about anything you mispronounced or said wrong. It's true. The greatest way for you to stop being so self-centered is to realize how self-centered everybody else is.

Everybody is walking around going, "God, I can't believe I said that," like they're going home and studying the Scripture of what you said. What does it matter? I preached one week, and my button was undone. I didn't realize my button was undone. I bet I stressed about that for three days, like the button police were watching my YouTube. How stupid is that? Here I am preaching the Bible telling people that Jesus Christ is Lord and sovereign, and I'm stuck on a button. Now, y'all are looking awfully judgmental. I bet you've gotten stuck on some stuff. God said he will not control everything. He will not control your priorities. You will. You will decide what matters to you.