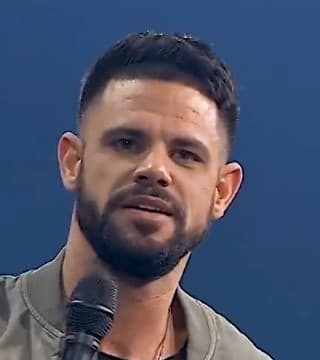 A theological term would be predestined. "All things work together for the good of those who love the Lord and are called according to his purpose". "For those he foreknew he also predestined, that we might be the firstborn among many brothers and sisters. Those he called he also justified, and those he justified he also glorified, and those he glorified he glorified to the end that his purpose might prevail in the earth". To break it down into really simple language, all I'm trying to say is God is still working. God was working in the things you did wrong and the things you did right. The activity of God cannot be stopped by human decision or mistakes.

In fact, some of your greatest mistakes will be the seed of your greatest miracles. It's called purpose, and it always prevails. God is so determined that he meets with Jacob in a certain place when the sun is set, because he made up his mind, "I am the God of Abraham, Isaac, and Jacob". But when we say that purpose is determined, I think it's important to make a distinction. Purpose is not only determined by God but it is also determined by us. The way I would put it is this: purpose is determined before it is discovered. I'll explain that from the text. "When Jacob awoke from his sleep, he thought, 'Surely the Lord is in this place, and I was not aware of it.'"

Now God did not show up when Jacob woke up. Jacob woke up to the fact that God was there all along. God did not show up when Jacob saw him. He was waiting to be seen in something very common. I believe it's good to pray for God to be with us, but I think it's better to pray that we could see where he has already been, because he has been there all along. When you pray, "God, be with us," it's kind of redundant. I'll tell you why. He said, "I will not leave you nor forsake you. Surely I will be with you even to the end of the age".

Now if it's not over, God is still here, so I don't have to ask him to do what he already promised to do. All I have to do is wake up to the reality that he has been working all along. By the time you see it, it's already been happening. By the time you got to church today, we had already done so much. Do you think we started when you got here? At some of our locations that meet in high schools and theaters, where we don't own the building… They're portable locations. They're portable because as soon as we're done we have to take everything out. They're portable because during the week they're something else. But when we show up in there, guess what it becomes? A church. It's not a church because we put a steeple on it. It's not a church because it says "church" on the sign.

In fact, when you say, "I'm going to church," you're not exactly correct. You are bringing the church to a building because that's what you are. You are a carrier of the presence of almighty God. Jacob is so funny to me. "God is here, and I didn't know it". How can you miss God? How can God be in the actual place and you didn't see him? But he could only see it when he was asleep. Then he woke up to see what God was doing all along. Purpose is determined before it is discovered. He wakes up… Remember, we have a rock, and Jacob makes it a pillow. He is repurposing the rock to make it a pillow. It's not exactly a Tempur-Pedic, but it will work. Sometimes you can't be picky. Sometimes you have to take whatever you have. "It's not my favorite song, but I'm going to worship to it anyway, because I don't need my favorite song to worship God. It'll work". "It's not a lot of money, but I'm going to make it work". "My husband isn't exactly…"

Okay, we're going to skip that part. He says, "This'll work". When he lies down… I'm going to do this for you. I'm going to demonstrate this for you. Not many preachers would go to this extent to bring the point across, but if I have to lie down on this monitor to show you what Jacob did and the situation he was in, I will lie down on this monitor. That's not even comfortable. Not even kind of comfortable, but it'll work. He sees something while he sleeps, and he wakes up. He goes, "Well, that was awesome. That was amazing. This is the house of God".

Well, first the Bible says he was afraid, because fear is the flip side of faith. Fear is what you feel that enables you to open yourself to faith. Fear is the sensation that leads you to something greater than yourself that causes you to have faith that God is greater. So first he was afraid. Then he was excited, and he said, "This is awesome. Wow! This is lit". That's what Moses said at the burning bush. "This is the house of God". Remember now, he took some oil, rubbed it on the rock, and said, "This is the house of God," pointing at the rock. God doesn't live in a rock. Except that one verse says if we don't praise him the rocks will cry out.

So he takes the rock he made the pillow, and he takes the pillow and makes it a pillar. The rock became the pillow; the pillow became the pillar. It is what you make of it. If you say it's a gate, it will be a gate. If you point to your pain and say, "This pain is a portal to the glory of God, and something that is going to come through this pain is going to bring me deeper joy," it will bring the joy of the Lord into your situation. So point to your pain and say, "This is the gate". I can look at something that seems so ordinary, a moment that seems so trivial… A job I hate can become the gate if I point at it and anoint it. God didn't call it the gate; Jacob did, and it became what he called it. "This is the gate".

This is the moment. This is the time. This is the season. This is the day the Lord has made; I will rejoice and be glad in it. If the Enemy had his way, I'd be so focused on tomorrow and what it holds I would miss the provision of the strength God wants to bring while I am in Bethel, but this is the gate. I just thought of something that made me laugh. I pictured you going to work, and I pictured the person who annoys you so much coming up to you, and I pictured you not saying it out loud but just smirking a little bit and saying to yourself, "This is the gate". God is going to use the people I can't stand to make me patient. You've been praying for patience. It's going to come through the gate of Pete.

You know Pete at work, Pete with the bad breath, Pete who takes all the credit? Pete is the gate. He missed the whole point too. "This is the gate. I'm going to come back here, God. If you bless me, if you give me a car and watch over me…" He's trying to negotiate something God already told him he was going to do anyway. One time Pastor Mickey took me to visit a businessman, and I was asking him for money because I wanted to bring in some preachers for the Fellowship of Christian Athletes for our high school. He taught me something as a 17-year-old, because Eugene Oliver started writing the check, and I had only said three words. "We're trying to…" And he said, "How much"?

The first thing I didn't know is put a few more zeroes on it if somebody asks that question, because I asked him for $500. I wish I could go back. While he was writing the check I kept talking. "We're going to take the money and we're going to use it…" Pastor Mickey put his hand on my leg and squeezed me. He looked at me. He didn't say anything until we got out of there. He said, "I'm going to teach you something right now. When he's writing the check, shut up". I don't know, but maybe you could look at your neighbor and say, "Shut up. It's already done". You're trying to strike a bargain with God who already said he'd be with you. "Well, if you will, then I will…"

God is not an if/then God. The promises of God are yes and amen. It's already done. That's what he saw sleeping on that rock. "This is the gate". It means I can go into any situation, even the uncomfortable ones. Isn't it crazy that God used the place of Jacob's discomfort to give him his greatest revelation? Don't you think that 77-year-old man woke up with a sore neck after sleeping on a rock? But he said, "It's awesome, not because of how it felt but because of what I saw. Not because of what I felt but because of who I know. This is awesome. How awesome is this place".

You know you can say that anywhere, not just in Hawaii, not just in church? This is the gate, and it's the gate because I gave it a purpose. Purpose is what allows you to see… Let me say it like this. In every place there is a purpose, but before it is discovered it must be determined, and God will allow you to determine the purpose of the place you're in. You can simply survive it or you can be strengthened by it. You can resent it or you can be like John, who on the island of Patmos, wrote the book of Revelation.

You decide the purpose for the place. Is this going to be the place where you become bitter and lie down and die from your disappointment or is this going to be the place that you discover a deeper source to drink from? All the good grass is in the valley. You can only get strength from certain places. This is something Jacob could not get anywhere else but here. In this place. The Lord is in this place. Remember, he still has 490 miles to go before he gets to his destination, but the Lord is in this place. It means he is with me on the way.