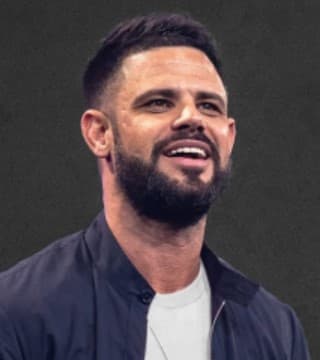 You're never really saying goodbye to anything you give to God. You're just opening your hands, which means that before you can receive anything you have to release something. For those of you who like to take notes, you can write down the word release, because process is revealed in potential and potential is revealed in process, and it comes a little bit along and along, but the first step is to release. The sower must release the seed to see what it could be. I'm just wondering if there's something you need to release in your life today. Could it be possible that you are looking at something, praying about something, and trying to manipulate something God wants you to release so it can mature and manifest?

This is for all of us who are control freaks. Until we release it, it can't grow. Let it go and watch it grow. It can't grow if you're trying to control it. It's starving seeds and then it's strangled seeds, holding on so tightly. "Oh, it's my time. It's my money". I feel so sorry for people who aren't generous. I feel so badly for you, because all stinginess does is strangle the seed God has given you. If you could let it go, who knows what it could be? What if I just preached that sermon in the mirror? It would bounce right back, but if I put it out through that camera, it might hit Botswana and help somebody in their life… or Bamberg, South Carolina. I don't care.

I want to say this. It's so important. When we talk about potential, a lot of people start trying to produce something God did not put inside of them. We have oranges wanting to be apples, apples wanting to be kumquats. You're not a kumquat; you are a delicious red apple. You're going to be a big, juicy, red apple, but you will not be a kumquat.

My barber told me a story the other day. His name is Fly Ty. That's who you want to cut your hair. He put fly in his name. I trust him with my fade because he's Fly Ty. He attends our University City location. I asked his permission to tell you this, because I didn't want to embarrass him, but, y'all, he told me the dumbest story ever the other day. He was cutting my hair, and he has this bad habit of stopping cutting my hair while he tells me a 15-minute story. He needs to go to multitask school, because I have things to do. Cutting the clippers off and talking. But it's fine, because I usually like his stories and his anecdotes, but this one was dumb.

Listen to this. He told me a story. I don't remember exactly what the year was, but years ago, he was hosting, because he's not only a barber; he's a radio personality. He works for the Hornets. He's very involved in the community. He speaks to little kids. Every time he comes to cut my hair, he has recently spoken to a group of kids that same day and he deejayed a wedding and he cured cancer and he fought a fire on Providence Road. He's just everywhere all the time. He was sitting there telling me this story, because we were talking about potential and what God has put in you. We talk about this a lot. We talk about God. I guess because my dad was a barber, I just have a love for barbers, so when the clippers start going, we start talking.

We were talking about it, and he told me a story that Jay-Z came to a concert. I guess it was in the 90s before he was as popular as he is now. The concert was half full, and Fly Ty was one of the hosts for the concert. He said he observed Jay-Z during the concert talking to one of the members of a female group who was also on the concert bill called Destiny's Child. He said the concert was half full because Jay-Z was just on the come-up, which would lead him to be, some would say, the greatest rapper of all time, depending on how you quantify that. It's a very strong case. He said, "I've since thought back to that day, because Jay-Z and Beyoncé were back there, and I was watching their relationship develop before my eyes. He's my same age, and I think often to myself, 'Look at what he has done with his life, and what have I done with mine?'"

Now, of all of the people in the Milky Way for you to choose to use as a standard of how successful your life is, you just had to go get Jay-Z. Not even Lil Wayne… Jay-Z. You had to pick the most influential rapper of our lifetime. So here's what he did. He just wanted to feel small so badly that rather than focusing on "Look at how gracious God has been to me…"

I'm Fly freakin' Ty, clippers in one hand and microphone in the other. I have potential, but I have to let go of what I think I'm supposed to be to become what I am. You know how sometimes you get this parental guilt? I watched a football game with the boys last night, and I came to tears because there was a commercial of a man taking his son fishing. I was choked up. I said, "I'm so sorry, boys, I never took you fishing". Because I'm thinking that's where the lessons of life need to happen: on the boat. They were like, "It's okay, Dad. It's fine. Let's watch football". It can always make you feel like, "I need to be a dad like that".

The truth of the matter is Holly was telling me how her dad used to take her out on the boat all the time. I was like, "Do you ever feel like you married the wrong guy, that I've never taken our family out on a boat once? I don't even know how to drive a boat". She said, "No. I hated it on the boat. My dad liked the boat". See how I did it, though? "I have to take my kids out on a boat to be a good dad". It's just a small thing. I understand it could be much deeper than that. You could start thinking when you are supposed to have a family by. Anything. "I am supposed to be farther along in my career". But when you let go of what is supposed to be in your mind… The sower has to release the seed.

I feel God calling some of us to release some things, even to release bitterness. Some of us, if we would release that root of bitterness, we would reap a harvest of peace. It has to be released. God is calling me to release some things, release some expectations, and release my white-knuckled, Enneagram One perfectionist ideas. Sometimes I cut off my circulation and strangle the seed of opportunities because of my need to control it. When you throw your net on the other side… Do you know what I love about sowing?

You don't have to be in a good mood to do it. The seed doesn't care if you carefully dropped it or threw it and walked off. It's still where it's supposed to be. Peter said, "We've worked hard all night and caught nothing, but because you say so…" He got blessed while he was rolling his eyes, because he had the faith to do what Jesus said. You have to sow it when you feel it and sow it when you don't. Now, from the seed's perspective, being planted is a different experience, because the sower has to release but the seed has to remain. Both are so important…so important.

It was 13 years before he knew what that mantle meant, 13 years of being planted. Correctively speaking, why does Peter get so much airtime in pulpits for stepping out of a boat? That same thing that made him step out of the boat made him run when Jesus went to the cross. How about John who stayed in the boat and when Jesus was on the cross stayed by his side to take care of his mom? But we don't celebrate those who stay. We don't celebrate those who just do it. We make a tagline out of it for a shoe company, but we don't celebrate it. In other words, the seed has to remain in order to reproduce.

I wonder why we think God can grow what he wants to grow in our lives when we keep uprooting what he's doing every time it gets uncomfortable. The soil is so important to the growth of the seed. You can have a really good seed, and it can become nothing not because it was nothing but because it was surrounded by something that wasn't worthy of its presence. This is the power of environment. What is around the seed determines whether what is within the seed comes out of the seed. I don't know if this is pertinent to anyone in the area of who you spend the dominant amount of your time hanging out with, but what's around it eventually determines whether what is within it comes out of it.

You can have really good stuff in you, but if everything around you is just dark and noise, if there's no light to it, if there's no hydration to it, it won't take root. If it doesn't take root, it can't come out. As a matter of fact, God sent me to speak to some people, saying, there's nothing wrong with the seed. There's nothing wrong with who you are. It's just what you've surrounded yourself with in your mind, in your heart, on your feed, in your time, on your schedule. I'm looking for plowed ground. I want other people in my life who can help bring out. I want to join an eGroup. I want to get around some good soil, because I want the good stuff that is in me to come forth out of me.