Steven Furtick - Are You All Right? 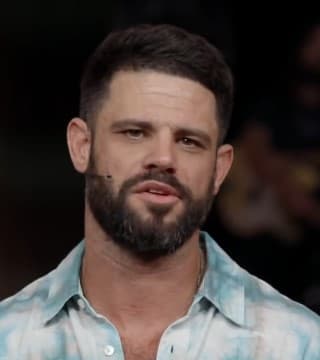 Do you know the difference between God and people? He really wants to know. The other people who ask you that do not expect a detailed answer with subpoints. I love the woman, because Gehazi comes to ask her, "Are you all right"? but he's not the one who prophesied the baby to begin with. Watch what she does in verse 26. I know we said she's a great woman. But he said, "Are you all right? Is your husband all right? Is your child all right"? None of these are all right. She's not all right, the husband is so old he can't carry Bobby up the stairs (we're going to give the boy a name), and the son he's asking about is dead. And she does something.

Even though she's a great woman, she lies. "Everything is all right". She's lying, like you. "Everything is all right. It's all right. Nothing to see here. I'm good". She's lying like your Instagram feed. She is lying like that picture you posted from the family vacation on Facebook. Why did she lie? Maybe she wasn't lying. Maybe she just knew something. Maybe she knew, "I don't need to talk about my problems to somebody who doesn't have the power to solve them".

This is a word for somebody. I don't need to process this in a place that is powerless to help me. I want to stop asking everybody else about stuff that only God can fix. I want to stop trying to fix things publicly that can only be dealt with privately. I want to quit seeking affirmation in public places and let God speak to the place. She said, "I'm all right, but I'm not really". Look at what she did next. She pushed right past the person who had no power to solve it. Quit talking to everybody about everything. Quit complaining to everybody about everything. Quit letting everybody know all your business. Quit trying to cover up stuff for people, and go back to the one who spoke it to start with.

Verse 27: "When she got to the man of God at the mountain, she took hold of his feet". She's great enough to saddle up the donkey, and she's humble enough to fall at his feet. You have to be both. She came down, and Gehazi came to push her away. I bet you have something right now as I preach this word trying to push you away. "Don't listen to him. This isn't for you. This is for someone else. You're not good enough for that. You don't have any right to expect that". But the man of God said, "Leave her alone. This is between the two of us. See, I spoke this to her. She's in bitter distress, but the Lord has hidden it from me, and I don't know why yet". Holly, the next verse is what brought me over. After I preached last week's sermon, I saw this verse. "Did I ask…"?

I stopped. I said, "Yeah, of course. Of course you wanted me to preach this, Lord, for everybody who's dealing with something they didn't ask for". "I was just trying to take care of you. I wasn't trying to invite this in my life. I didn't even want all this. God, you shouldn't have called me to do this if you were going to let it be so hard that I couldn't do it. Did I ask"? She's at his feet now. She's off her donkey now. "Did I ask? I asked you to come eat. I asked you to come stay. I didn't ask you to ruin my life. I didn't ask for this! You did this. You started this. I told you it would end like this. I didn't want to get my hopes up. It hurts to hope. The more I hope, the more open I am to disappointment. I told you this was going to happen. Every time I try, I fail. Every time I start, I stumble. I told you it would be like this. I knew it would end like this". "I knew I shouldn't feel good. I knew I shouldn't try. I knew they would betray me. I knew they would let… Did I ask"?

Where have we heard that before? That's the same thing Elisha said to Elijah. That's the same persistence that started his ministry. "I will not leave you. I will not forsake you". God is saying, "If I did then, I will now. If I spoke it, I will perform it…in an empty room, in a full room, with many, with little. Abounding or abased, I will not leave you". She said, "You spoke this. You started this. Now you have to do something about it". Do you know how you know you're growing in your relationship with God? When you can tell him the real stuff at his feet and trust him like that. Everybody else sees what you do. "Oh, she has a big house. She keeps the preacher over there". They didn't know the depth of disappointment of her barren womb. Only God knew that. Some things only God knows.

First Corinthians 2 says the spirit of a man searches the man. Only God and you know it. There are some things I can't say through this camera today. It's just between you and God. Maybe God put you in this moment so he could tell you a few things. Just the two of us. God said, "I need your attention right now. I need you at my feet right now. I'm trying to bring some things to life, but I need this to just be the two of us. I'm going to use people, but…"

When Elisha followed the woman back to the house… Look at it. The boy was there on his couch. The mom, the woman, the great woman, the proactive woman, did something we all have to do sometimes in our lives. After you've done all you can do… The Bible says in verse 33, "Elisha went in, shut the door on the two of them…" Now the woman who birthed this boy has to stand outside the door and trust God's prophet to do what only he can do. Are you standing on the other side of a closed door today, wondering how God is going to get your kid out of this one? I imagine that this woman who was proactive enough to tell her husband, "Saddle up the donkey and buy a lamp" rushed into the room.

Maybe she thought she was going to stand there and give orders. She's that kind of woman. But the prophet knew something about when God wants to do something really amazing in your life. He turned to the woman and said, "I know you gave birth to this boy, and I know you're great, and I appreciate you, but right now, it's just the two of us". He sent her out of the room where she couldn't see. Verse 34 says, "Then he got on the bed and lay on the boy, mouth to mouth, eyes to eyes, hands to hands". It's personal. He didn't just lay a staff on him. Gehazi tried that, and it didn't work. What God does in your life is going to be personal. This is a personal word.

God says, "I'm going to actually connect with you". Your eyes… You see, so you can touch and feel. It's personal. He lay down on the boy and stretched himself out on him, and the boy's body grew warm, but he still wasn't alive, so Elisha turned away and walked back and forth in the room. It's a process. I want you to say that about everything in your life that you don't understand. He's pacing around the room, and the woman has no idea what's going on on the other side of that door. You have no idea what God is doing behind the scenes in your life. The prophet is pacing. I think he sent her out of the room not just because it was personal and not just because it was a process but because it was private.

I hear the Spirit of God saying right now, "I need some alone time with your problem. I don't need you standing over me so much, telling me what to do, so I'm going to close this door. I'm going to spend some time with that thing you've been worrying about, and I need you to just go right now. You can walk around downstairs, and I'll walk around upstairs". The Bible says she had to stand on the other side of the door. Do you know how much faith it takes to stand there with the thing you gave birth to…? God is saying to some of you, "Give me my promise back. I'm the one who gave it. I can't have you standing over me telling me how I'm supposed to do it and when I'm supposed to do it. Leave this thing with me for a little while".

God is working while you're waiting. We thank God for open doors, we thank him for closed doors, because what he's doing in this moment is greater than you know. What he's doing in that room in your life is greater than you know. You thought you built it for one thing. You really built it for another. Give him that space. This is a Holy Spirit moment. What do you do when the thing you didn't ask for happens in your life and the thing you were holding in your arms one moment dies in the shifting seasons? I hear God saying, "Take it back, put it in that place, because today is a day of miracles".