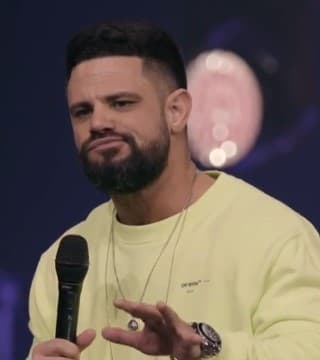 And the one with one… I did a little research this week. I asked a few people, "You know the parable with the five bags, two bags, and one bag? Which one are you"? Nobody said, "Five". A few said, "Two". Almost everyone I asked… And it was a small sample size. I only asked four people. I mean, it's not like a Barna research poll. It was really informal. But they mostly said, "One". I get that, because I have had people misunderstand our ministry who did not see where we started. Can I preach this? If you did not see where I started, please do not judge where I'm at. I've always considered myself kind of a one-talent man. I can't fix anything.

My mom… I don't know what was up with this. She was texting me pictures of my ninth-grade report cards today as if to give me sermon material for the fact that I'm a one-talent student. The thing about it was I didn't go to Harvard. I didn't go to Princeton. I didn't go to anything like that. Even in preaching, a lot of times I will feel an insufficient vocabulary to communicate the vast riches of the expanse of God's glory, and when I think about how to put into words what I want to say, the Devil will try to get me to downplay the deposit God gave me in order to diminish the gift in my eyes.

But I found out something, and this is what we really want to unleash on insecurity today. This is what I want to give you to help you flip the bag. It's not about how many bags you start with; it's how quickly you can flip it, because God is a multiplier. If God speaks to you today through this message, the very best thing you can do about it is to flip it quickly before the Devil snatches it back. When you come to church or when you watch on YouTube or however you consume this message, the best thing you can do…

Think about that, and let's read it again. It said it's like a man going on a journey, and it said when he went on his journey… Verse 16: "The man who had received five bags of gold went at once and put his money to work". It doesn't say that about the one who got one bag. It doesn't say that he went at once. I never noticed it said at once, but I think it's very important for what becomes of what God speaks into our lives and what God does. If I preach today and before you go to sleep tonight you share with somebody… Before I even get done saying this message, if you are already thinking, "Wow! I could share that with someone", what that does…

You take the word you were given, you multiply it so quickly before the Enemy can snatch it, and it begins to bear fruit in your life because you treat it as seed. When you treat the word as seed and you invest it back, either through sharing it with someone else or acting on it… You have to act on what God gives you before you talk yourself out of it. You have to act on it. There will be no amount of notes you can take from a sermon that will give you the victory in your life. It is when you flip it. That is to convert it from word form into flesh form. There are so many things God has spoken to you that got snatched before they ever did what they were intended to do. Here's the principle: it is not how many sermons you hear that determines how much you grow.

Some people are professional sermon-hearers, professional Bible-highlighters. You should see their highlighter array. They have 48 flavors of highlighter. They have blueberry-scented highlights, but it is not the amount of bags I get. That's why you can see a professional athlete or musician end up broke after making millions. You're like, "Dang, man. Are you serious right now? That guy is broke? That guy made $23 million when he was 19". Yeah. If you would have made $23 million when you were 19, you'd be dead with your dumb, foolish self. You would have killed yourself. At least that guy is alive.

So I started thinking. When I went through it, I was like, "Wow! The one with five went at once". He flipped it quickly. "I'm going to do it right now. I'm going to open my Bible right now, not after I read Facebook, because after I read Facebook for five minutes, I will lose my faith in humanity and God. I have to read it right now, first thing when I wake up. I have to flip it right now". When he did it at once… He went to work at once, but the master stayed away a long time. It took time for it to mature, but he acted on it immediately. That's what the guy with two did.

Now, the beautiful symmetry of the passage is that the man who handed his master four talents experienced the same joy as the man who handed him ten. I'm really blessed by that. It's not about how many bags they handed the master. It was in the process of trusting that joy was born. It means that regardless of what you've been given in your life… Because you're like, "I'm the one-talent guy. You haven't talked about him yet". I'm about to. I'm about to talk to all of the one-baggers. One Bag Billy. Let's give him a name. One Bag Billy.

At first he's kind of excited. He's like, "Oh, cool, man". Remember, only three servants got any bags. This dude is rich. He's going on trips and stuff. This guy has much property, but he's one of the three who got trusted. Remember, when you attach your security to stuff or your significance to status, it's never enough. I wonder if One Bag Billy was happy for a little while, but then he runs into Tommy, Two Bag Tommy. Billy is like, "Oh, Tommy, what's up, man? This is the best day of my life"! And Tommy is like, "Me too"! "Did you get the bag"? Tommy is like, "The bag? No, I got bagsss". "Bagsss? There ain't no bagsss. I got one bag".

Well, here comes Freddy. Freddy is coming up. "I got five bags from the master"! Five Bag Freddy, Two Bag Tommy, One Bag Billy. See, the reason Billy got afraid and hid what he had is because he went on Instagram. I'm going to preach like it's 2020. I'm going to bring this parable to modern times. He went on Instagram on Tuesday, and it was Two Talent Tuesday on Instagram. Five Talent Friday on Instagram. Ol' One Bag Billy starts thinking. "I wonder why I only got one bag. I was feeling pretty good about my bag until I saw your bagsss". "I was feeling pretty good about my little vacation until you started talking about Italy. You went to Italy, huh? Hmm. I went to Myrtle Beach. I used to like Myrtle Beach. You went to Milan. It's all right. Cool. No, I like Myrtle Beach. I'm more of a local kind of guy".

Now I have this bag. Now I'm feeling bad about the bag the master gave me, because it's how we count it that matters. When we hear this, we feel bad for Billy. We're like, "Oh, man. Poor Billy. He's walking around with this bag". Let's look in the bag. Can we look in the bag? We live in a world that worships the bag. We never even look at what's in it. So, what was a talent? It's a weight. How much money do you have to have of silver coins (let's not even talk about gold) to weigh a talent? That is 6,000 days of pay for a day laborer. One talent. Now, you can't convert the economics from Palestine to Ballantyne. It would be somewhere around, what we would call, 1.4 million, because we have words for this. Right? Million.

So I was reading this and I was feeling bad for Billy. I was like, "Dang, man. I probably would have hid it too. I would have been ashamed to work with a million if I was friends with Tommy and Freddy. I probably would be hiding mine too". Until I realized something. It's still a million. That's a lot. Oh, not to you? A million is not a lot to you? How many of you know a million is a lot and you will take it if somebody wants to Cash App it? It's still a million. When we read it in contrast to two and five, it sounds small, but put it back in context. It's still a million. When you start thinking, "I don't have anything to feel good about right now. I don't have anything to be proud of right now…"

I just want you to look at the Devil some this week when he's telling you you don't have anything and you are not anything. Only you and the Devil will know what this means. Say, "It's still a million". I got really arrogant one time, because the church was growing, and we had a holiday weekend, and there were only 8,000 people in church. One staff member showed me my million. They asked, "How many people lived in the town you grew up in"? It was 6,000. What I needed was to break down my blessings, to break down my bag and remember, "It's still a million".