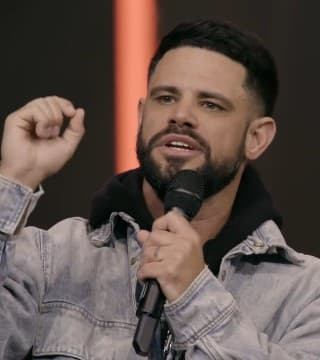 You don't get to choose every situation, but you get to choose the story. Oh, the power of God is in that truth! You choose the story you tell yourself. So if something is hard, you can be like, "Oh man, this is hard. I thought God told me to do it, but I guess the Lord isn't in this. This is hard. It must not be God". What if Jesus would have thought about the cross that way? "Oh, this is hard. This must not be the will of God. I must not have heard God on this one". That's a story. Here's another story: "This is so hard it must be God. The Devil must have gotten a memo that I'm on to something good. I'm on the edge of Canaan. That's what these giants are here to signify".

It is dangerous when you select a certain story. "Nobody cares about me". Give me your phone. I will show you people who care about you who checked on you this week, but you let that Devil in your editing room and gave him your typewriter (I'm an old-school preacher). You gave him the seat in the chair to edit your story. You get to choose your story. I didn't always believe this. I thought, "Certain people have certain stories". No, no. Those are situations. Life will give you a lot of suffering. You don't get to choose it, but if you're going to have to suffer enough because of the situations life brings, why would you choose to suffer with a story? I don't know who this is for. It's probably not somebody in this room. You've suffered enough. What you're going through is hard enough. What you're dealing with is heavy enough without telling yourself a story about it that reinforces the thought that God is not with you.

I'm still in Acts 11. Peter told them the whole story. He saw what God did. They heard it. He saw it; they heard it. He showed up and said, "I heard what y'all have been saying about me, but there's a hole in your story. You're telling me what you heard. Let me tell you what I saw. I saw the vision of the whole earth being reached by the gospel of Jesus Christ. I saw it. I experienced it. I know that God is for me". "How do you know"? "Well, I was there. I was there when he picked me up. I was there when nobody else could give me the comfort and the balm and the medicine, but God helped me through that night. I was there when I was in the middle of an emotional storm that I saw no way through, but look at me on the other side, dancing on the shore. I was there.

Watch this. One person says, "I'm going through the valley of the shadow of death". Somebody else says, "There's a table for me in the presence of my enemies". It's the same situation, but it's a different story. Shout if you know that the Devil might take your money, he might rob you of a few years, but you can't have my story, my joy, my anointing, my authority! Get under my feet, snake! One of my best friends is going through the most horrible season of their life right now. He and his wife lost everything last year. I don't mean that like we say it. You know, your video game progress got lost. I'm not talking about that. I'm talking about stripped. I'm talking about I felt like I was watching the book of Job. I thought they would lose their faith. I really did. What would make me mad is every time I would call to encourage them, they would start encouraging me. I was like, "Stop it! This is your encouraging phone call".

Have you ever been trying to unlock the door and somebody else is unlocking it at the same time? "Stop it! Stop it! Stop it"! The wife said something. They lost their ministry and had to move to the other side of the country. Much of it was his decision. It wasn't her decision, and then as the consequence of his decision, she ends up having to leave everything she has known…the town she grew up in, the ministry, all of it. Left it. Gone. Other side of the country. Then she gets diagnosed with cancer. So I'm like, "Are you for real right now? Her"? I saw her after all her hair was gone from chemo and after she was 33 percent smaller than she was when I saw her last. All of the stuff was in full effect. She started talking about, "Thank God for the insurance". Think about this. She said, "Even though we lost everything, if we hadn't moved across the country, we wouldn't have gotten put on different insurance, and our old insurance wouldn't have covered this".

So I'm thinking… I kind of have an attitude about it. I'm like, "Well, if God can get you to the other side of the country for better insurance, he should have stopped the cancer". That's how I think. I know. Your halos are just glowing right now. Y'all trust the Lord with all your heart and lean not on your own understanding. Sometimes I lean on my own understanding. I'm like, "This is ridiculous". I didn't say it out loud, but I'm sitting over there thinking it. I'm thinking like, "Well, did God really have to make you lose everything, get you across the country, give you insurance if he's a healer"?

I'm thinking that. I called them yesterday. I was like, "I keep thinking about this insurance thing y'all keep saying. It's bugging me. It doesn't make any logical tactical sense. The Great I Am who can part the Red Sea can't stop you from getting cancer; he just gets you on a better insurance policy". I said, "I don't get it". She said, "It's not your story". I want you to look at the Devil and say, "It's not your story". She said, "If I believed that this was the end for me, I wouldn't survive, but if I believe that I will see the goodness of the Lord in the land of the living…" She said, "That's my story and I'm sticking to it".

Let the Devil know, come hell or high water… I get to choose the story I tell. Yeah! I feel empowerment in this word. I get to choose the story I tell. I get to choose. Be careful about selective stories, be careful about self-centered stories, be careful about secondhand stories, and be careful about short stories. This point is not for Holly. She has never in her life… I might have to pay for this when we get home, but it's going to be worth it to get the point across. When my wife was growing up, her dad used to say, because there were three women in the house… Well, three daughters and a wife, so it was him versus the estrogen, and the estrogen was just so powerful. When they would start telling a story, he'd go, "How long is this story going to be? I just need to know. Should I get comfortable in my chair? Should I fluff my pillow? Should I get an MRE? How long are we going to be here in this story"?

I thought that was so rude that he would say that, but now I know what he was saying. It's not I don't want to hear it; I just want to pace myself with my attention span, make sure I take some notes so I can refer back to point 3A. But it's always so eloquent. I don't mind. Anyway, she says something all the time to people that I have never said to anyone. Somebody will be telling a story. This happened last week. She said last week to somebody… They were starting to tell a story. I'm yawning. I look interested, but I have an inner yawn. I'm thinking the more I nod, the faster they'll do this. She goes, "Oh, this is a great story. Please tell me everything, and don't leave out any details". "Shut up"!

When it said Peter told the whole story, I thought about Holly. I thought about the whole story, all of the details. Sometimes you let doubt cut you off in the middle of a sentence God is speaking in your life. So be careful about the short story. Be careful when people try to summarize your life into a neat little category. Be careful when you tell yourself a story like that's all there is. That's not all there is. There's more to the story. There's a hole in your story right now, and I wonder what you're going to fill it with. When Peter went down to preach to Cornelius, he went down to tell him the good news about Jesus Christ. When he recounted it to the circumcised believers in Jerusalem, he left one part out.

Let me show you what he left out of his story. He left out the sermon he preached while he was there. I want to show you just one thing before I sit down and put this mic up and send you home happy. I want to show you why some of you are stuck in a part of your story that was never intended to be the end. When Peter got up to preach to Cornelius, in Acts 10:39 he said something about Jesus that "We are all witnesses…" "I saw it. I know what you heard. I saw it. I was there. I saw him save me. I saw him pay the price for my sins. I saw him shed his blood. I saw him with the lashes on his back. I saw him as a sheep before the shearer, and he didn't say a word. I saw it for myself". "We are witnesses of everything he did in the country of the Jews and in Jerusalem. They killed him. They hung him on a cross…"

The word of the Lord for you today, my brother, my sister: don't stop at the comma. The next verse says, "…but God…" I love those two words like I love the breath in my lungs. "But God…" We were trespassers. We had broken his law. We did not deserve mercy. Somebody shout, "But God…" If you stop at the comma, you'll never get to see the but. God was raising him from the dead by the time the story started to spread. Resurrection is possible when you realize he didn't stay on the cross.