Steven Furtick - You're Still On Schedule 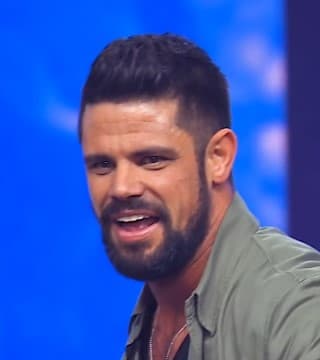 One thing I found out about the seed is that the seed is protected. I need you to know when you're in a soil season in your life, in a season where you can't see anything happening… See, God knew the seed would need to survive a period of vulnerability, so every seed is wrapped in a hard protective coating. Until it produces what it's meant to produce, nothing is going to be able to get what's inside of the seed. I see Moses in a basket. They were trying to kill off all the Hebrew children, but until the seed was ready to be released, the seed was in a basket floating down a river to protect it.

There are some things in life you can't do for your child, but how many are grateful that when the seed leaves your hands it never leaves God's eye? His eye is on the sparrow, and he has your babies. It's protected. The seed is in a stage right now where it doesn't have the roots to be able to get the nutrients from the soil, and it doesn't have the ability through photosynthesis… You would think I was an agricultural, horticultural expert preaching this sermon. I got excited about the seed, and I discovered that the seed has its own food supply until the time that it is able to derive the nutrients from another source. What am I trying to say? The seed has not only protection, but the seed has provision.

Everything I need for life and godliness is inside of me. What I can't get from others in the soil stage, God will give to me from the inside. I'll date myself, love myself, help myself, bless myself, encourage myself. The stuff that the seed needs is already in the seed, so don't even worry about it, because it's protected. Protection and provision. If you're looking at somebody who's shouting right now and you don't understand their enthusiasm, the reason they're shouting is they have some stuff in the ground. They have some dreams in the ground. They have some potential in the ground. When it rains, farmers don't get annoyed. When it rains, everybody who has something in the ground reaches up to receive. I hear a sound of an abundance of rain in the house today. Come on, you'd better stretch and catch this rain. You'd better catch this.

So the protection is on the seed, the provision is in the seed, and it's just a matter of time before the potential is released from the seed. I'm preaching this message to somebody who is in the soil stage. We will all sow and we will all reap, and sometimes we'll sow in tears and reap in joy, but can the seed of your faith survive the soil? When the seed goes down to die… Jesus said in John 12 if a grain of wheat doesn't fall to the ground and die it just remains a single seed, but if it dies it becomes many seeds. He was saying this to signify the kind of death he would die. You do understand that Jesus wasn't preaching about okra. He was prophesying about his own death. He needed his guys to know, "I'm going to be in the ground for a little while, but when it looks like I've lost, don't worry. We're still on schedule".

The word of the Lord for somebody today. You're still on schedule. Grace accounts for the years you've wasted and the time you lost and even the opportunities you didn't know how to seize. You're still on schedule. How else could Jesus have been interrupted in Mark, chapter 5, on the way to Jairus' daughter's healing…? When he got there, the people were making a loud commotion because the little girl had died while Jesus was interrupted by the woman with the issue of blood who had been subject to bleeding for 12 years. Jesus just keeps going to Jairus' house, and they say, "Don't even bother to come now, because she's dead". Jesus says, "She's not dead. I'm still on schedule. I might look late to you, but for what I want to do, I'm still on schedule".

When he got to the house, he said, "Everybody shut up, because she's not dead; she's sleeping". Jesus shows up at the house, and he dismisses all the doubters who were in the room, because what you see as dead God sees as sleeping. He healed the little girl and made her a sandwich, because he was still on schedule. "Jesus, you should have gotten to Lazarus' house early. It's a little late to show up after his body has been in the tomb for four days". Jesus said, "Don't even worry. If I had gotten there according to your timetable, you would have called me a healer. You already knew I was a healer. I need to reveal a different dimension of my ability in your life". "For your sake, I'm going to be late, but when I look late in your life, don't worry about it. Roll the stone away, and I'll speak a word, because we're still on schedule".

The Bible is so great. The Bible says there is coming a time where the reapers will overtake the sowers. Do you know what that means in your life? It means grace has the ability to bring it in where life didn't even throw it out. God is saying in this season of your life… I'm in something now. I don't even know who I'm preaching to. The problem is you're so close to quitting in the soil stage you're about to walk away from your hope and miss your harvest, because you can't see it in the ground. That's where faith comes in. I can plow in the season of sowing, and I can reap in the season of reaping, but what do I do while the seed is in the soil?

I have a suggestion, and I took it from the text. Here's my suggestion. When you've done all you can do, prayed all you can pray, sowed all you can sow, prepared all you can prepare, get some sleep. He said that whether the man was awake or sleeping, the soil was producing. So when you've done all you can do, prayed all you can pray, altered all you can alter, fixed what you know how to fix, get some sleep, and trust the soil. I read this Scripture one time that said the Holy One of Israel neither slumbers nor sleeps. It means God is a night owl, and it means he's also an early bird. I read that Scripture one day, and I realized, "Well, if God never slumbers or sleeps, I might as well take a nap". "If you're already going to be up all night looking out for me and watching over me, there's no use in both of us being up all night. You've got this? Good. Because I need some sleep".

I need you to touch your neighbor, because they're stressed out, and tell them, "You need some sleep". Tell them, "You look kind of tired. I see some circles over your eyes, and you need some sleep". You've already sowed all the ways you know to sow, and you can't reap yet because the seed isn't done doing what it's going to do, so you might as well get some rest. You know what? You reap better when you're rested. I said you reap better when you're rested. What you need to do in this season after you've sowed all the seeds… Who am I preaching to? I need to know. I'm going to find it. I'm scattering seed.

I want to see where it's hitting. I want to see where the plowed ground is. You're going to need your strength to reap, so rest while you can. Sleep while you can. Get some Z's while you can, because when the harvest comes, you're going to need all that energy and all that strength and all that mental capacity to bring it in. So why don't you get some sleep? When Jesus was on a ministry assignment one time, he left one place, and he was going to another. He was ministering on one side of the lake, and he was going to minister on the other. You know what he did on the boat? He went to sleep. Why did he go to sleep? Because there's nothing I can do about what's on that side while I'm on this boat. There's nothing I can do about it right now.

They said, "Jesus, wake up. There's a storm". He got up to the storm and said, "Shh! I'm sleeping. Leave me alone. I'm sleeping right now, because when I get up, I have work to do". You know that's what the seed is saying in your life right now. You're getting frustrated, but the seed is saying, "Shh! Let me sleep. I'm working down here. I have to get a little bit of breakthrough from this hard coating. I have to get some roots in this soil. I have to bring forth what I'm meant to bring forth. I have to get ready to burst forth, because I'm about to become something spectacular".

Let it sleep. Don't rip it up out of the ground. Don't walk away from the field. Don't get frustrated. Don't even be annoyed. Don't get irritable. Just let it sleep. Just let it sleep. But when you go to sleep, make sure you sleep next to your sickle, because you want to be ready when morning comes to say, "Here it is. I'm ready for you. I'm rested. I'm ready. I trusted in sowing, and I'm ready for reaping, because I rested in the middle, and my life is still on schedule".