Steven Furtick - When You've Tried Everything 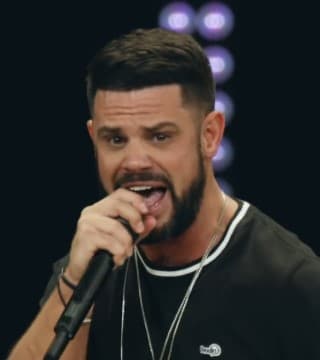 So, he's standing in front of Jesus, and he's rightfully skeptical, because he's in a broken system where the religious leaders are trying to let the first ones in and keep the rest back, and unless you keep the law this well you can't be healed. Of course he's stuck. He's stuck in a broken system. So are some of us. He's stuck in a bad story, and so are some of us. We've inserted verses that aren't even there to explain why we are the way we are. We think it's our job to suffer. Suffering for Christ and for the good of others and sacrifice is one thing, but to suffer the shame he already took away from you is to snatch back what he nailed to the cross. It is not your job to suffer like that. That's a broken system.

I'm telling you, men and women of the Most High God, religion is a broken system. That's why Jesus went for one: to show you, "This is a relationship. I want to deal with you one-on-one. I want to speak to you like a person, not like you're some kind of project, not like you're some kind of defect". "I don't have anybody to help me. Trust me, I'm trying. I'm really trying. If you knew how hard I was trying, you wouldn't make fun of me like that and ask me if I want to get well. I don't have any help". See, that was true five minutes ago, but the situation has changed. What he said used to be true. It was true for a long time, and then grace shows up at the pool at Bethesda. Five porches. Five is the number of grace. Always symbolism. There are levels to this text. We could preach a series on this text.

Now grace is here, and what used to be true isn't true anymore. Are you still stuck in something that used to be true but isn't true anymore? I bet he would be tired. Thirty-eight years of fighting off the vultures and 38 years of looking out for yourself. You kind of have to live that way until grace becomes the dominant reality in your life. Then Jesus comes into your life, and everything changes. But sometimes we keep living off of the old story, the bad story. "No one will help me". Jesus is like, "I'm someone".

So, the man said, "I'm trying", and Jesus said, "Trust me. Get up, take up your mat, and walk". "I'm trying". Jesus said, "Trust me". "I'm trying". "Trust me". That's the real task: to trust. That has always been the real work. John 5 isn't a text about being lazy. "Come on. Get up. Make up your bed. Get on the treadmill. Go get 'em, tiger. This is your day". This is not a pep talk. This is a complete reversal of the systems of this world. It is a contrast of works and grace. That's why it had to happen on the Sabbath. The moment he picked up his mat he was doing work, and the moment he was doing work it made everybody who was in power mad, because he wasn't supposed to do work.

I want to help you walk, but first I need to help you want and to want the right things again for the right reasons, to heal your desires". By the pool of Bethesda, here comes walking living water. That's what he told the Samaritan in John 4. He said, "Within you will be rivers of living water". I know you can't get to the water. Let the water come to you. You will not receive certain things in your life from trying, but only by trusting.

We were at a pool eight years ago. Elijah wanted to swim, and we went down there. It was a hotel pool, and it had that hotel pool smell, but we went in anyway. He was at that point 7 years old, so I had to get some energy out, so we got in the pool. As soon as we got in, the doors busted open. The hotel manager said, "Hey, sir. I advise you to get out of that pool". I said, "Why"? It's the middle of the day. I'm like, "Stupid hotel rules". I'm not one to really like stupid rules. I'm like, "It's the middle of the day. There's nobody here. I am a registered guest". By the time I'm in the middle of my imaginary speech… I'm usually nice externally. It's just what happens on the inside that makes me go to hell.

About the time I was about to say what I was about to say, he said, "We just shocked it". I said, "Well, next time we'll give you notice before we come. I don't want to shock your pool". He said, "No. Sometimes the water, once a week or something, has to have a treatment. We call it 'shocking' the pool, because when the chlorine combines with the… I really don't want to tell you all that's in this pool. This is a hotel pool, sir. Bacteria, sweat, other fluids. Pool fluids. Hotel pool fluids. So once a week we have to shock it".

Once a week, I come to church, because sometimes my heart gets mixed up with some substances, some contaminates, some disappointments. Sometimes this world pollutes me. When I come to church, please understand I'm coming to treat my disappointments, because I need living water. I don't want to die by the pool, so I came to church. I don't know if you came to church for this reason. I don't really know why you came, but tell somebody, "Shock the waters". Jesus said, "I came down to the pool at Bethesda not just to look around and go home and pray a nice prayer, but I came to this pool, this house of mercy, to shock the waters". It just might be that God brought you here this week because you've been in a state of disappointment, but God said, "I'm about to shock the waters. I'm about to stir it up".

Then why did Jesus go to Nazareth and it says he couldn't do many miracles there? He tried to, but they tripped. I believe there are many for whom this message is just another Bible message. I believe there are some and maybe even few for whom this is a definitive word for your life. You have been like that man. You have been paralyzed in an area of your life for a long time, and you've been trying, but you've been bitter for eight years over what the business partner did, and you keep trying. This is not about trying; this is about trust. You've been going back and forth and back and forth and back and forth for so long, and today God is saying, "Let the water come to you".