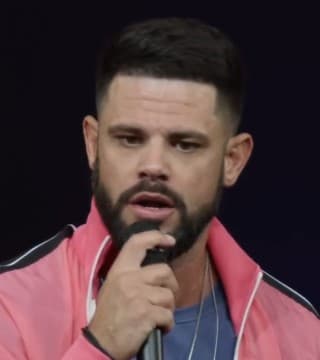 If you try to get the stuff out of your life that you don't like, you will tear out the wheat, the substance. You'll tear out the thing God is growing. See, what would happen if you planted this particular type of weed, or some versions call it the tares, the wheat and the tares… It looked the same on the surface, but where it was really difficult was underground where the tares would intermingle with the wheat and the root systems would get intertwined. Sometimes what God is doing in your life beneath the surface… The pain is intertwined with the purpose.

Do you hear me? The thing you don't like about yourself is sometimes the thing God is using. We ask God to use us, and we ask God to do his will in our lives…unless we don't like it. Then we want to root that out. So then it's like, "Well, God, I want you to do this but not that". What Solomon said is what Jesus said. "You don't know which one is which". We have to be very careful when we are trying to do our own gardening. I don't know about you, but I am not a horticulturist. I don't have a lot of agricultural experience. I was preparing this message, and I had this weird memory of being a little boy. My mom had this little flower bed outside our house, and one day I decided to be helpful. I came back to the door, and I was so proud. I was like, "Mom", and I had my hands full. I said, "I got all of the weeds out of your flower bed". She looked like she wanted to slap me, but she restrained herself. She said, "Those were the flowers".

I didn't know the difference, because I was too immature to know the difference. Sometimes we are spiritually immature, and we are running from things and removing things and resisting things, and in the process of trying to pluck out the weeds, you're removing the wheat. If God answered every prayer you prayed right now… I'm sorry. Bruce Almighty was a pretty good movie. It would screw up the universe. It would ruin your training. Look. Can I teach a little bit? All right. I used to not be able to do a pull-up. I'm not going to lie to you.

I was 22 years old, and I had never done a pull-up in my life. So, I started training to do pull-ups, and I could do some pull-ups. One day, this guy told me I had to do not only pull-ups, which was a feat of accomplishment for me that I worked my whole life toward to this point, a culmination of my entire life's effort in the realm of exercise… He's like, "Now I need you to do a negative". I said, "What's a negative"? He said, "Well, there are two parts to every rep. There's when you're going up and there's when you're coming down, but there's just as much benefit in coming down as there is in coming up". If that hits you right, you will start to see that the things in your life right now you perceive as negative might be a crucial function in building your strength and your stamina and your hope.

There are some things about God you can only learn going down. Ask Peter, beginning to sink, when he felt the grip of the grace of God through the hand of Jesus of Nazareth, and he said, "Now I know that you're Lord". It's the blessing of both. You don't know. You don't know the difference between wheat and weed. You can't do the angel's job. Let God sort that out. I heard the Lord say, "Keep sowing and stop sorting". Stop judging the experience the moment it happens. Give it some time to see what it is. As a matter of fact, I don't know if you have experienced this, but some of my successes have been the fruit of my failures. Some of the things that have produced the most in my life were the things that, honestly, at the time, I was the most embarrassed about.

I know most of you in this church know the song "O Come to the Altar", the song that almost never was. There were 12 versions of that song. All of them sucked. Write this down. You want a deep revelation? Success starts with sucks. He said, "Sow it in the morning, sow it in the evening, because you don't know". Seeds can be deceiving. Seeds can look awfully small. Seeds can look impotent, and they may be dormant for a while. When you sow them they go away for a little while, but they didn't go to die; they went to multiply. Some of the things in your life you said goodbye to you need to say, "See you later. I'm expecting you to come back up again, because I believe in resurrection". The blessing of both. I need both in my life. Paul needed both. I guess I do too. Paul had this thing he called a thorn, and he kept trying to weed it out. He asked God three times, "Take it away".

If you've ever asked God to take something away, that's fine, but if he doesn't do it, leave it alone. Here's why you can leave it alone: because the presence of weeds will not cancel out the power of the wheat. What is supposed to grow will grow. Leave it alone for a little while and see what it becomes. See if it will be the fruit. This failure you're processing right now… Some of you started the business. You did the thing, you took the step, and you made a mess out of it. See if maybe that might be the seed of something that becomes something people will celebrate in the future. You will know and God will know you almost gave up.

Didn't you ever preach one you hated and then everybody wanted to talk about it for the next year, and you preached one you loved and nobody ever remembered it? It'll make you mad, but that's how the breath operates, so you'll be reminded that you need the Spirit of God, not just structure and skill. Some things in your life are going to surprise you, because you don't know. He said, "One might work and one might not or both might do equally well". In fact, he said in the ESV, "Both may be good". That made me think of Joseph, naturally. Old Testament Joseph with the coat, the coat that got him beat up; the coat that got him thrown in a pit; the coat that represented the favor of his father; the coat that was kind of loud and obnoxious, but he wore it anyway; the coat that let him know he was chosen even if people didn't like him. Remember, you need both.

Everybody is not supposed to like you. If everybody likes you, you are doing nothing. If everybody likes you, you stand for nothing. If everybody agrees with you, you are saying nothing. You don't need everybody to like you. This is spoken like a true prophet now, because one time I was going through some criticism, and I asked God to make it stop. He said, "Well, if I stop that, then I have to stop the blessing that created the criticism to begin with", because both grow together. "Oh, I want to be used by God, and I want everybody to agree with all of my decisions and validate my existence". Both grow together. So, when Joseph did get pushed in a pit, it was no surprise to me that the Ishmaelite caravan was the one that picked him up. It didn't surprise me at all, because that's just like God. He always uses both.

Ishmael was the son Abraham had doing it his own way. Isaac was the one he had doing it God's way, but guess which one God used. Both. You mean God will use my mistakes to bring about a deliverance in my future? You mean God will use the dumb thing I did? I'm saying, "Absolutely". If he's sovereign he will. If it's his field, if it's his harvest, if it's his job to superintend your life… Even the Ishmaelites served a purpose. When David slept with Bathsheba, after the child died, the next son he had was named Solomon, who was the wisest man who ever lived, who wrote Ecclesiastes 11. His dumbest decision led to the world's greatest wisdom. I saw it in my mind like this. I saw that God is using both in your life right now. When Joseph gets thrown in prison, it's not good, but God uses that to introduce him to somebody who is going to bring him before Pharaoh. When he comes before Pharaoh, Pharaoh is telling him about a dream that means there's going to be a famine in the land.

Well, the famine isn't good, but God is using the famine to create a position of favor for his people. When they finally got there, Joseph is standing before his brothers, and he has a revelation that everything that has happened in his life wasn't good, but everything that happened in his life has been held in the hand of God. God wasn't just using the stuff that felt good to you, not just the stuff you praised him for, not just the stuff you thanked him for. Paul finally came to the point where he said, "I learned to thank God for my thorn. I learned to thank him for the things he is using that I did not choose for myself, the things he is using that tormented me at one time, but the tormenter was my mentor that transformed me into who I needed to be so I would rely on the grace of God".

Joseph said, "Oh, it's both". It's pain and purpose. It's both. We keep waiting for this day when everything in our lives will be stable and all of our relationships will be harmonious, and God said, "I need you to learn how to celebrate the wheat even while you're looking at the weeds". Even the Enemy serves a purpose. Even the Devil works for God. The Devil is not in charge of what happens in my life. God doesn't do everything that happens to me, but he uses everything that happens to me. There is nothing that is happening in your life that will not have to pass through the hand of God by the time it's said and done.