Steven Furtick - Predict An Upset Victory In Your Life 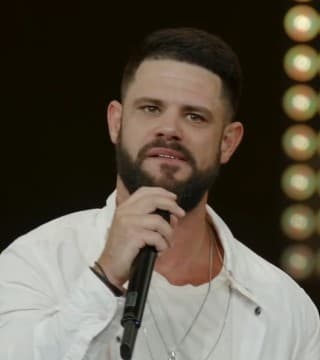 Do you know only (the spirit of lack and limitation)? Do you know only (what Saul said to David)? David was showing Saul his résumé. He was like, "I'm pretty good at beating stuff that's bigger than me. I beat a lion one time. I beat a bear. Put me in, Coach". Saul said, "You're only a boy". I wonder what you're only in your own mind. Remember, Saul wasn't the enemy. Saul was supposed to be a friend. Have you ever had something inside of you turn on you? "You're only…" I had it this week. I was thinking, "I'm just a preacher". I was thinking how really influencing culture is done through rappers and fashion and others. I was thinking about changing a generation, and I felt discouraged about it like, "I'm only a preacher", but there is this one verse that always comes up when I think that way.

David said, "I dropped the lion. I dropped the bear. It only stands to reason that if the lion didn't stand a chance and if the bear didn't stand a chance, because they opposed my father's business, if this giant opposes the purpose of God, I predict an upset victory…" over everything in your life that is bigger than you that opposes the purpose of God within you. Come on! He's the God of the turnaround! Somebody shout, "I know how this story ends because I know who wrote it". I know who wrote it! He is the author and the perfecter of my faith. Holly looked at me last weekend on our date night. This movie was going to have a nice ending, but she remembered the writer of this particular movie is noted for everybody dying in the end. She looked at me. I want you to get this when I say it. She said, "It can't be over. I just remembered who wrote it".

I know how this story ends, so when I see him on the cross, I'm not worried. The disciples didn't know that. This is the challenge, to know how the story ends even when you don't know how it's going to get there. It might not be a straight line. It might not be perfect. It might not look like somebody else's situation. You get in the worst trouble of your life trying to wear Saul's armor and trying to fight like everybody else fights. Yours might be messier. Can I say something for somebody that God put on my heart? Yours might look laughable. "I'm only high-school educated". Good! God is going to get that much more glory because you didn't have a college degree.

Now, when people look at you they're going to have to know it had to be God. I know your GPA. It had to be God. God's purpose advances. I know your GPA. You weren't smart enough, good enough, pretty enough. You didn't pray enough. You didn't do the right things. It could have been a whole different story, but the grace of God stepped in just in the nick of time! Spoiler alert. Goliath goes down. Plot twist. Goliath goes down. Guess what? That's not how the story ends. I'm sorry. I know it looks great on the flannelgraph. David is awfully cute with a slingshot, especially with this one you pull back like it's God's spiritual spitball. Boom! I know it's the cartoon version. Here's the grownup version. Are you ready? David never read 1 Samuel 17:50. Most of us never read 1 Samuel 17:51. All apologies to all of the children's Bible teachers in church, but you don't really know how this story ended. When David hit Goliath with the rock, it stunned him, but then David had something else he had to do.

Now, I'm going to preach us home. Are you ready? What did Goliath have that David needed that David didn't know he would need? It's right in verse 50. It says that he came to the battle without a sword in his hand. Spoiler alert. He left with one. Who was carrying it? His enemy. Come on, y'all! I'm trying to be good, but I declare… I know how this story ends. Goliath has got your sword. Goliath has got your grace. If you want to see the victory, you're going to have to defeat what's standing in front of you, but you don't have to do it on your own. Come on! Let's stir something up all over the whole church at University City and Blakeney. I want every single warrior and every single worshiper to declare, "I know how this story ends". Tell the person next to you, "I know how your story ends". Tell them, "Your story ends with glory".

God is going to get the glory out of every situation in your life. I know how it ends. Some jet ski is going to bring me the kayak. I don't know who God has in the water, but even now somehow the sister said to Jesus, "God will give you what you want". David stands over the giant. I always read it as being the final sequence in the battle, that after he knocked him down he took the sword from the scabbard. Has anybody ever said scabbard in the last 10 years? He took the sword, and after he killed him…he's already dead…he cut off his head. Why did he do it? For a trophy, because this wouldn't be his last giant. Now, I always thought the story was over when David cut off his head. How much more savage can you be? The head is off, and the giant is down, but that's not how the story ends.

What's so crazy is that the whole point of the story has nothing to do with David to begin with. It says that after Goliath died all of the Philistines, when they saw that their hero was dead, turned and ran. Your story is not even about you. What you're going through right now might not even be about you. Do you know how many people I've seen come out of grief and release their greatest gift from their greatest grief? Goliath has your sword. You're going to be sitting across from somebody who needs it in five years telling them, "I've been right there in the battle, but here's what I found out. The sword that came to kill you is going to be the one God uses to deliver you". He killed Goliath with his own sword. Your giant has your sword, but that's not how this story ends. He cuts off his head, sends the sword to the temple at Nob, which was where Ahimelek was the superintendent. A little while later, David goes back to Saul's palace. Saul starts going absolutely crazy trying to kill David. David has to run from Saul.

Remember now, Goliath was not the last giant David would face. You don't want to stay stuck in just one victory of your life. The Bible says he leads us from glory to glory and from strength to strength. Stand up! I'm trying to close. I'm trying so hard. Don't leave but stand up and clap your hands if you know, "This is not my last one. This is not my last victory". I come against midlife crisis in the name of the Lord. There is more for you to do. You have a legacy to pass on. You're going to make a bigger difference in your future days. Your latter days shall be greater. I know how this story ends. Yes, I know how the story ends. Hang on a second. David runs down to the temple. He's running from Saul. He has already killed Goliath, and he has to leave so quickly that he doesn't have a sword. He runs to the temple attendant. He says, "Man, I need a weapon".

How many of you need a weapon to fight something in your life today? You need a strategy. You need an insight. Come on! You need a breakthrough. David said to Ahimelek, "Don't you have a spear or a sword here? I haven't brought my sword or any other weapon, because the king's business was urgent". The priest said, "I'm sorry, David. I have one sword. It's the sword of Goliath the Philistine. At least, it used to be until you killed him, but now the very weapon you took from your enemy, the very strength you gained from the thing you survived, the sword of Goliath, the word God spoke over your life…"

I know. I know that no weapon that is formed against me shall prosper. Now, the Bible doesn't say the weapon won't be formed. It just says that it won't work, so watch this. The weapon was formed by my Enemy. Isaiah 54:17 is on the screen right now. The weapon was formed by the hand of my Enemy. What you're going through might not have been from the hand of God, but you have to read verse 16 to understand verse 17. God says, in verse 16, "Behold! I have created the blacksmith who made the weapon", so God said, "The Enemy might have formed the weapon, but I formed the Enemy, and there is nothing that Enemy can bring against you"! Come on! There is nothing, because I know!