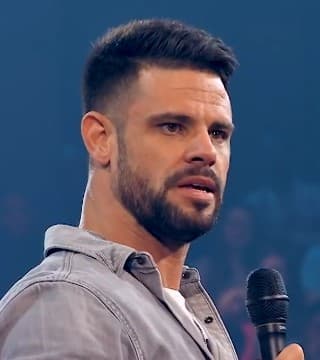 The Devil won't like it when you say that, because the way he gets you to leave your assignment is to convince you that it doesn't matter what you're working on. It's so small. "This is significant". Don't wait to say that until it seems significant, because that takes no faith. "This is significant". This. Not just that. This is significant. Have you ever wanted a new car and picked out the kind of car you wanted and the next thing you knew you started seeing that car everywhere you went? What happened? They just flooded the market with that car all of a sudden? Google has an algorithm in your brain, so they put the cars in front of you? Perhaps. We're probably coming to that day. But it wasn't Amazon; it was your attention. You started seeing it when you started searching for it.

What had Elijah been doing for three and a half years before the drought was over? Survival, which in that three-and-a-half-year span was success, because sometimes just making it is what matters. I mean, just still being in faith is victory sometimes. But when the shift happens, I wonder if you'll be ready for the rain you've been praying for. If you stay inside your brain, your reflex will always be to run. What has Elijah been doing for the last three and a half years? He has been running and surviving and running and surviving and running and surviving. So when the rain comes, he runs. For a little while, he's running ahead of the rain. He's running in front of the chariot, because he's ready for his next assignment. He's ready to serve Ahab now. He believes revival has come to the nation.

The Baal prophets have been destroyed. The Ashtoreth prophets are all lying at their own altars, dead in their own blood, and now revival can come. So he runs 17 miles on the fuel of his faith, on the fuel of the promise of God coming to pass in his life. He runs ahead of the chariot. He runs ahead of the rain, and then something happens. If the Enemy can't kill you in the invisibility stage or the insignificant stage, the only thing left for him to do to keep you from receiving what God is pouring out in your life is intimidation. He can't keep God from making it rain, but maybe he can keep you from receiving it. If he can get you running… I'm a runner, and I'm a rainmaker, but now I'm a refugee.

Watch what happens when Elijah should be celebrating the storm. I'll come back to that another week. Celebrate your storm. We always preach about storms like it's something we want to get out of. What if the storm God sent into your life was to prove his presence? Celebrate your storm. Celebrate the storms you survive, and celebrate the storms when they come, because you know God is with you in the storm. He is an ever-present help in the time of trouble. When the storm came and Ahab went down and told Jezebel what Elijah had done, she knew her days were numbered, so she sends a messenger to Elijah. What happens next is going to shock you. You just watched the faith of a rainmaker, but now you're going to see the fear of a renegade, a runaway, a refugee.

The messengers come to Elijah. Let's play this out. They say, "Jezebel says she's going to kill you". What we are expecting next is for Elijah to tell Jezebel where she can go with that noise and what she can do with her threats. Wouldn't you? "Wish Jezebel would try to kill me". So what comes next is shocking against the backdrop of the boldness of a prophet who put his head between his knees and waited for rain, who survived three and a half years of drought, who was fed by the mouths of birds and at the house of a widow. Now the rain has come, and now the drought is over, and now… Verse 3: "Elijah was afraid".

Never thought I'd see those three words. I would have understood if he ran while the drought was still in progress, but it's raining now. It's raining, and Elijah, the one who survived three and a half years of drought, is running? The Bible says he's running for his life. I don't buy it. I'm sorry. I don't buy it. I don't believe, Elijah, that you're afraid that Jezebel can kill you, because if she could have killed you, she wouldn't have sent messengers to warn you. If she could kill you, she would send her bailiffs to arrest you, but she knows she can't kill you, so she's trying to contain you. Don't you know the Devil found out a long time ago that he can't curse what God has blessed? Don't you know if the Devil could have killed you by now he would have killed you by now? If he could have kept it from raining, he would have kept it from raining. If he could have taken you out, you'd be out. But since he couldn't kill you, he tries to contain you, so he intimidates you.

I feel the presence of God so powerfully in this place. I'm ready for rain. I'm not running from it now. I'm ready for it. I'm ready for rain and all that it brings. I'm ready for the storm. Isn't it amazing how you can be in a blessed situation and have a dry soul and have rain falling all around you? Elijah ran for his life, and he went into a cave in the wilderness. He isolated himself. A voice came in the form of a gentle breeze, which was a whisper, and called him out of the cave. I don't believe God is calling you out of the drought today; I believe he's calling the drought out of you. Listen. If this is for you, you'll know it when I say it. You've been telling yourself you're in a dry season. Really, you've just been in a dry place. If you would come out of yourself…

Do you know what God told Elijah? He said, "You think you're the only one"? Elijah had convinced himself… You know how we do when we get inside ourselves. Nobody appreciates you. Nobody sees you. It's nothing. There's no one. God said, "I have 7,000 who have not bowed their knee to Baal. You think you're the only one? You're not the only one. You're not alone. It's not nothing. You're not alone. There is a cloud, but you won't see it in the cave". I want you to stand to your feet, because the Spirit of the Lord is passing by. For those of you who are ready to stop running from the rain God has blessed you with, for those of you who have been in a place of invisibility ("I can't see it right now"), insignificance ("It doesn't matter because it's not much"), or intimidation…

Sometimes God can bless you with the very thing you were believing him for, and you don't know how to stand in a season of success. What I'd like for you to do right now is symbolic. I want you to lift your hands to heaven like you are receiving the refreshing presence of God, the rain of his presence. When we say, "We receive your rain", let's not picture our situations right now. Let's sing it over our souls. Maybe you're in a good season but you're just in a dry place inside. The only way to come out of the drought is to get the drought out of you. You have to come out of yourself, out of your self-consciousness, out of your self-absorption, out of your obsession with what others think, out of your failures, out of your past, out of your fears.

Come on, Elijah. The Spirit of the Lord is passing by. You don't want to miss your miracle because you are in the cave. Come out. It's raining now. Come out. It's raining now. Receive it. Stop resisting it and receive it. Stop running and receive it. I hear the sound of the abundance of rain. It starts like a whisper, and it's welling up. We declare over your life the dry season is over. There is a cloud. There is a well springing up. There is a river whose streams make glad the city of God. There is a cloud beginning to swell. Come on, worship him.