Steven Furtick - Getting Over The Opinions Of Others 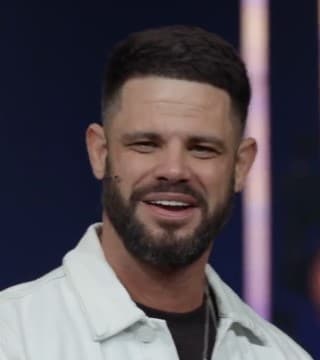 I can stop it with a thought. I found out thoughts are optional. I might have a thought, but I don't have to let the thought have me. I don't have to think like this, live like this, bleed like this! I don't have to die like this! Think of all of the ways he made! Think of all of the things he did! I've been thinking about the wrong things. I'm one thought away from joy, one thought away from healing. Thoughts are optional. Can I tell you how I know? If you did everything you thought, you'd have a prison ministry from the inside of the prison. Tim is so unsanctified he'd be in prison if he did everything he thought about since I've been preaching. It's kind of like a split screen to me. It's like probably what the other people thought when the woman was coming up and what she thought. I almost called the message "Hold That Thought". She said, "If I touch him, it doesn't matter what anybody else thinks".

Once you get over the fact that other people's opinions… They are not limits; they are merely suggestions. Contrary to what your mom told you, you don't have to eat everything on your plate. You don't have to believe everything in your brain. The thought is optional. I imagine that the woman thought… "Because she thought…" That's what got me started on wanting to preach about this woman, because just like her bleeding started on the inside, so did her healing. "Because she thought…" But you can't see thoughts, so how does Luke know or Mark know or Matthew know what she thought? By what she did. I'll make a suggestion, and y'all can click over to an Andy Stanley sermon, or something, if you think I'm preaching heresy. What if she had a thousand other thoughts, yet the only one she acted on is the only one that mattered?

See, I can have a thousand thoughts, but the one I hold determines where I go. I bet she also thought… Can we talk about what the woman also thought? You've been sick 12 years. You've been to every doctor. You've been kicked out of every insurance policy. Nobody wants to hire you. You have preexisting conditions, so nobody wants to be with you. Twelve years. That's long enough to completely give up hope. That's long enough where she would have also thought… Here's the screen of what she did. Here's what she also thought. What's the point? "I've tried this before". Some of y'all can't even hear a sermon well, because you got inspired last Sunday and you feel like you had an even worse week, so you don't even want to hear it anymore. "Cool, man. Whatever". I bet she had the thought, "Whatever". She heard about Jesus. "He's a healer". I bet she thought, "Whatever. I've seen this show before. What does he want? He just wants my money too".

Do you ever think things? Even good things can be wrong things. I was talking to one of my friends this week who studied the creative process. I was like, "Give me a piece of advice on the creative process", because I'm constantly trying to create. I feel sometimes like I'm just bleeding, hemorrhaging the next sermon. My friend said, "Hey, make sure you rest while you're working and let your spirit work on your sermon too". I was like, "All right. Cool". I don't know really how to rest, because I identify myself by what I do. I tend to associate my worth with my work. I always thought I was only as good as my trophy, only as good as my achievement.

So here's what I said back to my friend. I said, "That's really cool. I love that advice to rest and just let my spirit work on my sermon, let my subconscious work on my material. That's a great creative tip". I said, "It's kind of like when a computer renders". My friend said, "Yeah. Kind of like that, but you're not a computer". I'm not what I thought. My friend was trying to get me to see, "You've got the right idea, but you've got the wrong identity. You're not an object. You're not a machine".

It started with a thought. Feelings start with thoughts. So, next time you wonder when you're in a bad mood, or something like that, like, "Oh my god. It's like the weather just changed on the inside. What happened"? Do some contact tracing with your thoughts. For some of y'all, this is going to mean you're not going to be texting everybody back this week. "I did some contact tracing, and I found out every time I text you, it's trouble for me". Isn't the Bible so up to date? Isn't the Bible so 2020? Look at the Bible. The Bible said Jesus stopped, and he turned around and said, "Who touched my clothes"? The disciples are annoyed, not just because they don't want to go back through and do the paperwork to find out who had COVID and who was exposed and six feet distance. None of that.

Watch what the disciples said. Verse 31. It doesn't say it was Peter, but I bet it was. "'You see the people crowding against you,' his disciples answered, 'and yet you can ask, "Who touched me"?'" Your feelings come so fast, don't they? It's hard to even know where it started. It's like, "You want us to trace it all the way back? Jesus, we don't have time to stop and talk about your feelings. Jairus' daughter is dying. We can stop and break it all down if you want to, but it's a lot of people, and it's a lot of stuff". I was telling Eric the other day, I try to figure out why I'm in a bad mood, but if I tried to trace everything that made me in a bad mood back, I'd never go anywhere. I'd never get out of bed. Some days, sunny weather makes me depressed because I think I should be outside enjoying it. Some days, rainy weather makes me depressed because it's raining. I can't trace anything back. It just comes so fast.

"Who touched me"? "A lot of people were touching you. A lot of things are happening. The world is really crazy right now". He said, "No, no, no. Who touched me"? Verse 32: "But Jesus kept looking around to see who had done it". I know we don't live by our feelings, but sometimes we need to focus on our feeling and see what led to it. Jesus is like, "Who touched me? Who touched me"? He didn't see her because she came up from behind. And the woman, who was only used to being a nuisance or an inconvenience… How many of you have ever felt like you were a nuisance because that's the way other people treated you? Or that's what you thought they thought. How stupid is it to be trapped in what you thought they thought? This is called thought tracing. Not contact, just thought tracing. "Well, I think they thought… They did that because they thought…"

The woman thought she was in trouble, and the reason I know she thought she was in trouble when Jesus stopped on the way to Jairus' house is because when she came up (verse 33), the Bible says, descriptively, she came back and fell at his feet and, trembling with fear… She thought she was in trouble, but she wanted to tell the truth. She heard, she came, she thought, she touched, she felt, she told. "It was me". I don't mean this in any kind of stereotypical way, but the fact that she was a woman makes me think she didn't give Jesus the plot summary, because my wife doesn't give me plot summaries or CliffsNotes. She told him the whole truth, what it had been like to bleed on the inside, what it had been like to once have resources, and as you spend all of your resources, your issue continues to deteriorate your reality. She told him that.

Trembling, she told him, "I know I wasn't supposed to stop you. I know I caused a big commotion. I know you were on your way to heal that important man's daughter". Jesus stopped and said, "Who did it"? It seems petty that he would stop healing somebody to come fuss at somebody. He said, "Who did it"? I wondered why he did it. When I read his response after she told him the whole truth… It says in verse 34 that he said to her, "Daughter, your faith has healed you. Go in peace and be freed from your suffering". But she was already freed from her suffering. When she touched him, "Immediately her bleeding stopped and she felt in her body that she was freed from her suffering". She was already free. Why did he call her back? Not to reprimand her. Maybe he called her back to give her a little bit more money or a little bit more details or maybe to give her a little extra help.

I read that over and over again. Do you remember how she snuck up and said, "If I just touch the hem of his garment"? The dirty part, the part that has been dragging through the street with feces and urine and the mud off the shoes of the feet of the other important people as they move through the street to do things she no longer had the resources to do. That's all she thought she was. "If I touch it… And then I'll sneak away". She snuck away like a thief. They couldn't find her. She snuck away like she stole something. He said, "Who did it? Bring her back". Then he told her what she already knew.

Why did he call her back and let Jairus' daughter die just to tell her what she already knew? Then I realized something. It's not what he told her; it's what he called her. He didn't call her, "Woman with the issue of blood". We call her that. He didn't. There are many times in Scripture that Jesus touches people and they're healed. There are very few where someone touches him, and there's only one time in Scripture that Jesus calls somebody "Daughter". This is the only time Jesus uses that term. Why did he stop on the way to heal Jairus' daughter? Because there was another daughter who forgot that she was a daughter.