Steven Furtick - Do You Feel Empty Inside? 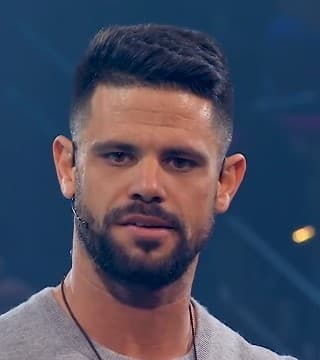 Sometimes I need too much from the wrong place. Sometimes I'm thirsty. I love God, and I know he's my shepherd and I'm not supposed to be in need, and I have his Spirit, but sometimes I have to admit to you I'm kind of thirsty. Look at your neighbor and ask them, "Are you thirsty"? Not you. You're filled with the Spirit of God. We get thirsty, and it's no surprise we get thirsty. We're weak. He knows our frame. We're made of dust. We came from the dust. We get thirsty in the dust. Dirty, thirsty people. That makes sense, but for Jesus to say, "I thirst…"

When he said it, the Bible says the soldiers around the cross came to him. He said, "I thirst", and there was a jar full of sour wine, cheap stuff, what the executioners drank while they were waiting on the person to die. This was the second drink Jesus was offered on the cross, but the first one he refused when he was on his way to the cross. When he got to the spot where they would drop the vertical beam and attach it to the horizontal beam… Because the cross works both ways.

I taught you that two weeks ago. When he got to that spot, they offered him a drink. This drink was, the Bible says, mixed with myrrh, which was meant to drug the person going to the cross. The women would prepare it often as an act of compassion or kindness. When they offered him this drink, perhaps in mockery, for he called himself a king… Mark tells us in Mark 15:23, "They offered him wine mixed with myrrh, but he did not take it". Maybe he saw it as a trap, because he was focused on finishing what God gave him to do. When he got to the cross, he refused to drink and said, "I don't need that".

I want you to do something for me. Everybody do this. I want you to get something in your mind that's trying to keep you from being on the path of your purpose. When I say "three", push it out of the way like Jesus pushed the cup of myrrh and say, "I don't need it". One, two, three. "I don't need it". He said, "I'm not drinking that. I'm going somewhere". With his gaze set on the glory of God, he went toward the cross. Now it has been six hours since he first got to Golgotha, and he says, "I thirst".

Remember, this is the same voice of God that created the clouds and filled them with condensation. This is the voice that has the power to flood the earth, and only Noah and every animal on the boat gets out of it alive, and he thirsts. We're surprised by it, or at least we should be. We're surprised when they come to him and there's a jar of sour wine and they offer to the Lamb of God who was slain before the foundation of the earth… You need to understand that what happened on the cross didn't start on the cross, and it didn't end on the cross. The cross was pointing at the prophetic fulfillment of the purpose of God that existed before time began.

They take a hyssop branch, which was what they used on Passover back when they would take the blood of a lamb and put it on a doorpost. They took that branch that they would put the blood on, and now the Lamb of God is bleeding. It's not the shadow anymore; it's the actuality, the revelation of God. The fullness of God is hanging on a cross in the form of a man, and they give him vinegar to drink for his thirst. They put it to his mouth, the same mouth that spoke them into existence, and they gave him vinegar to drink. How could he be thirsty? How could God struggle with a human sensation like thirst? If you want to write something down, write down struggle.

To really understand why he said, "I thirst" on the cross, you have to start in the garden of Gethsemane. The garden of Gethsemane is where he went out to pray before he drank the cup of suffering. It's one thing to come to church and talk about a calling. Sometimes a calling is like a beautiful cup, but what's in it when it comes time to really fulfill your calling… Let me break this down, because y'all are looking at me cross-eyed and stuff. It's one thing to pick out a name for your baby; it's another thing to have to raise them in middle school. It still didn't work. I'm trying really hard to bring this right where you are.

It is one thing to write down his last name with your first name and think about how awesome it would be to be "Mrs. So-and-So", but it's another thing to deal with his bad breath and his bad spending habits and realize that his mom didn't teach him how to put the seat down on the toilet after he used it and work out the mechanics of marriage in the context of the calling, not just the excitement of the concept of something. Sometimes, while we are very excited about the concept of being used by God… Stay with me, because this sermon is about to do something deep down in your soul. I feel the Spirit of God saying to somebody today, "What will you do with the cup"? Jesus had a cup he didn't want to drink, and he prayed in the garden. He prayed, "Father, if there's any other way to get this done, let this cup pass from me".

Just be honest about it. Remember, it's only those who hunger and thirst who can be filled. It's only those who know what it's like. He got down in that garden, and he prayed so hard about it, and he hurt so much about it, while Peter, James, and John slept on the side, but Jesus prayed. The Bible says he prayed to the point that his sweat was like drops of blood. He struggled to surrender. He was trapped in the garden between what God had spoken and what his flesh wanted. "I'm thirsty". Of course he's thirsty. When you sweat like that, you're going to be thirsty. I mean, if the Son of God sweated like that, what makes you think you're going to go through life and never break one yourself?

See, I'm not very comfortable with this. I don't like it. I don't really want to see a God who struggled like I struggle. I like that stuff where he opens his mouth and says, "Shut up"! to the wind and the waves. I like that, because that makes me think he's just going to walk into my situation… "Ssh"! Smooth sailing. But when he says, "I thirst", now I see him identifying with my shame, and it causes me to look at myself not as I wish to be but as I really am. Now I have to picture him carrying my shame. Shame will make you thirsty. Shame will make you try to fill something with the words of people that can really only be fulfilled by the Word of God. Shame will make you forget who you really are.

Of course he was thirsty. He was carrying your shame. To an untrained eye it looked like he was carrying a beam that weighed 80 pounds, and he carried it up a hill. This is from Pilate's palace where Jesus was sentenced by the Roman prelate. He had already been handed over by Caiaphas, the high priest. He has been going back and forth all night. He sweats in the garden. He heads to the cross. He gets there. They offer him something to numb the pain. He says, "No. I'm focused. No, not yet".

He pushes the drink aside, thirsty as he is, carrying my shame. Eighty pounds. It weighs a lot more than that when it's in your soul, a whole lot more than 80 pounds. It'll weigh so much you can't even look people in the eye when it's in your soul. He carried it the length of six and a half football fields from Pilate's palace to Golgotha. Of course he was thirsty. Come on, I can't even do a set of kettlebell swings and not take a sip. Of course he was thirsty. Of course he said, "I thirst". You know what? This isn't the first time Jesus said he was thirsty in John's gospel.

Can I tell you a story? It's a Bible story from John, chapter 4. It's interesting, because Jesus is going somewhere, but he goes around to get there, and the place where he goes is called Samaria. This is not a normal place for a Jew to go, so the fact that he went there was kind of surprising, but nobody asked him why he was doing what he was doing, because by this time his disciples knew that everything he did he did on purpose. That's going to come back, and that's going to be very important when I finish this little sermonette today. Everything he did he did on purpose. The Bible says he had to go to Samaria. He had to go.

Why? Why did he have to go to Samaria? Why did he have to go to the cross? Why would he go out of his way to Samaria where a Jewish person would not normally go? Why would God go where he was least expected? Do you ever wonder why God would bother with someone like you? Have you ever asked that question, "Why me, God"? Any parents who have ever asked God, "Why me? Why would you call me to raise a kid when I feel like a little boy myself sometimes"? The interesting thing to me about this little excursion Jesus takes is that he's going to Samaria, he sits down when he gets there, and he waits by a well for a woman.

Have you noticed how everything we've been studying in the Scriptures is Jesus showing up to people who didn't even recognize him when he did? Just showing up. Then he does something unthinkable. Talk about a thirst trap. Jesus, the living water, sees this woman coming, knows what kind of life she has lived, and yet he doesn't say anything about that. He says, "Hey, girl". A little modernization. He said, "Give me a drink". She didn't like that very much, so she got really deep. Here's what you do when God speaks to a place in your life. When God starts speaking to you, you get theoretical and abstract, because to be specific, to really have to deal with the issue, is actually sometimes painful.