Steven Furtick - Clearing Out Your Mind 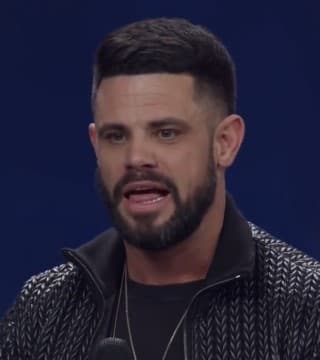 When he was in the middle of this crazy revival in Lydda, which wasn't too far from Joppa, this amazing eKidz volunteer died. Her Greek name was Dorcas. Her name was also Tabitha. They asked Peter if he would come to comfort them. He got there, and he saw how important she was to all of them in Joppa. He started looking at all of the clothes she sewed for widows. She had a ministry to the poor. She cared about people. She served on the parking team. She cared about people. She worked on production at Raleigh-Durham. They hated to lose Dorcas. Peter got kind of bored. He was a man of action. So he's like, "This is cool taking a tour of everything she did, but y'all leave the room".

Check out this Scripture real quick. I know I said Acts 10, but I want to go back to Acts 9. I want to give you the whole story. We know what happened when he got to Joppa. How did he get there? It's important. He went to Joppa to visit Dorcas. Acts 9:40: "Peter sent them all out of the room…" She has been washed and placed for burial in the upper room, and as they're memorializing her: "…he got down on his knees and prayed. Turning toward the dead woman, he said, 'Tabitha, get up.'" Peter is like, "We can have a funeral or we can have a resurrection". Peter was bold. He tried it like Jesus one time. Jesus did this same exact thing, but it was with a little girl. This little girl was dead, and Jesus sent everybody out of the room, because he knew if they stayed in the room, their doubt might make it impossible for faith to really do what faith can do when it is unencumbered by doubt.

What's the title of this message? Make Room for the New. When Jesus sent them all out, he said something in Aramaic: "Talitha koum"! It means, "Little girl, get up". Now watch Peter imitating his Master. He sent them all out of the room and turned toward the woman and said, "Tabitha, get up". It's almost like "Talitha". It's just one letter different. He thought something. "If Jesus did it and if his Spirit lives in me…" I came with a message for somebody. Make room for resurrection. Make room for things in your life that you were just about ready to bury to breathe again. "Tabitha, get up". And she did. "She opened her eyes, and seeing Peter she sat up".

Well, I guess so. She sat up, and he stayed in Joppa a little while, and they liked him. He was very popular in Joppa. Peter could have run for mayor of Joppa, because he demonstrated great power in Joppa. Joppa. It's a place where you don't expect anything great to happen but something does. Joppa is like your job. Job-ba. Joppa. He was just doing his job, just going to see it, and a miracle happened. He was just going to see it and going to comfort them and going to do what he did, and a miracle happened. Joppa: the place where God puts stuff together. Why he was in Joppa. Joppa. It's kind of familiar. Who else went to Joppa in the Bible? I was trying to remember. I was talking to the interns this weekend. I put them on the spot. We had such a good time.

I said, "Who else went to Joppa"? They went through every character in the Bible, guessing: Zacchaeus, Bartimaeus, Luke, Matthew, John. I was like, "No, no, no, no". It's somebody in the Bible. I'm going to give you a hint. It involves a fish. Rhymes with corona. Jonah went to Joppa. Watch what he did in Joppa. Are you ready? Jonah 1:3 says, "Jonah ran away from the Lord and headed to Tarshish. He went down to Joppa, where he found a ship bound for that port". God called him to Nineveh, but he resisted it. He resisted going to Nineveh because those were not the people he expected God to bless. He resisted what he did not understand. He resisted what he could not conceptualize. He resisted what he had no frame of reference for. He went down to Joppa and boarded a ship heading away from the Lord.

So now I have a contrast, and I want to ask: What will you do in Joppa? Will you be like Peter who when he got to Joppa and God sent him an opportunity to say, "Peter, I want you to make room for something new. I want you to believe that I can break a barrier in your life. I want you to believe that I'm about to do something your mind has not conceived". Will you be like Peter who went with it or are you going to be like Jonah who ran from it? Peter went to Joppa, and while he was in Joppa praying, he saw something amazing that he didn't expect. He looked, and he saw a sheet from the four corners, representing the four corners of the earth. God is like, "I'm about to break all of your barriers. I'm about to break through your unbelief".

See, we talk about making room for the new. You want to go have a yard sale, or something like that, or put everything on… It's not about closet space. It's not about clearing out your closet; it's about the transformation of your mind. Do you have room for the new in your mind? Because they didn't. Peter didn't. When God showed Peter what he was about to do… This is the way it always is. When God shows us something, we compare it to our previous point of reference, and then we start consulting our resources. God wants to bring us new relationships, but if you're not ready for new people in your life, you will bring the same patterns to the new relationships that you brought to the old relationships. We literally keep people out of our lives God wants to send because we are holding on to the hurts from the ones who have already left.

I feel the Spirit of God breaking barriers as I preach right now. You're like, "What does this message have to do with me? I'm not getting on an airplane and going to preach to somebody in Caesarea like Peter did". You don't have to. All you have to do is dare to believe that God is making room for the new in your life right now. Even sometimes when it was painful for me and I thought I was losing things in my life, I wasn't losing it; God was moving it. Who is this for? I just need to know. Probably about 20 people. You didn't lose it; God moved it. He said, "You will still be eating last year's harvest when you have to move it out". Somebody shout, "Move it out, God"! "Anything that is in the way of me being who I need to be in this season… Get it out of my heart. Get it out of my mind. Get it out of my habits. You can have it, God. I don't want it. I want what you have".

You can't receive new miracles with old mindsets. Make room for the new. It looks like this: emptying yourself, humbling yourself, and asking God, "What do you want to do in my Joppa"? Or you can run from it and resist it. You can keep remembering when the kids were so cute. They are 43 now. They stopped being cute quite a while ago. The church was trying to figure out, "How do we protect what we loved while we embrace what is new"? I don't know. I think there are at least three lessons in this text. Do you all have a minute? Make room for the new. First, God says: Don't limit yourself by labels. The first thing God told Peter… He said, "You have your nice little neat categories". Because when the sheet came down, Peter saw all kinds of animals.

Y'all need to know, in this culture, they respected visions. This was not like Peter's hallucination. You know how some people now are so weird and are like, "Well, the Lord showed me a vision of us walking on the beach". It's like, "Bro, you need to ask her out and stop trying to embed it in this weird spirituality". Peter actually saw something, but remember, there's sometimes a tension between what you thought God showed you… It's a tension, and that tension is a real gift, because that's where growth happens. It's like, "God, I thought I was going to be married to her the rest of my life, but I'm not. We're not married now". That's painful, but what you do with it becomes your Joppa, which determines if you run from God's purpose for your future or run toward it. That's Joppa.

The word God gave me was "Don't limit it with a label". The first thing he told Peter… Peter said in Acts 11:6, "I looked into it and saw four-footed animals of the earth, wild beasts, reptiles and birds". Then after he saw the pigs in a blanket, he said, "Then I heard a voice telling me, 'Get up, Peter. Kill and eat.'" Now when I read that, I said, "God was trying to get Peter to go hunting"? No. It wasn't about the animals. He was about to send Cornelius, who Peter saw as an unclean Gentile. So he was using this… It wasn't about bacon; it was about barriers, mental barriers. When he said, "Get up, Peter. Kill and eat", it wasn't that God wanted Peter to kill a pig; it was that he was trying to kill Peter's categories.

In this season of your life, God is trying to kill your categories. He's going to use people you did not even like to grow you up and mature you. There was one person the other day who shared a Bible verse with one of my kids, and they left our church years ago. They didn't even like me when they left, but when they gave a Bible verse to my kids, I said, "God, I don't care who hands them the Scriptures. I'll take a cold cup of water in the pit of hell from anybody. I don't care who hands it to them. Use who you want to use, God. Do what you want to do. Kill my categories".