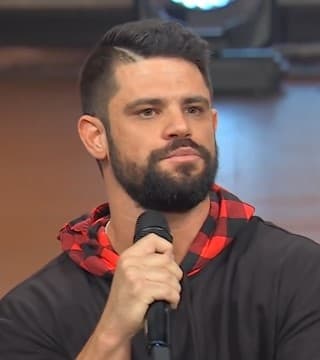 The enemy always wants to fight you one-on-one in isolation. If you can look back over the times in your life where you were the most discouraged, I guarantee you that it was because you allowed yourself to become isolated. You may have even had people around you who wanted to help you, but you were in solitary. Holly told me about a study. I don't know if it's true. Please don't write me any animal rights letters about this. They took two monkeys, and they put them in an experiment to see if they could scare the monkeys. They did it two ways. The first time, they put the monkeys in separate cages, and they measured the cortisol, the stress hormone. It measured off the charts. They would flash lights and make loud sounds. I know they shouldn't have treated those monkeys like that.

I didn't do the experiment. I just heard about it from Holly. Write her about it if you don't like it. They put them in the cage alone and measured the stress, and then they put them in the cage together. They did the same experiment, the same flashing lights, the same loud sounds, but the stress level when they were in the cage together was half what it was when they were apart. Touch somebody and say, "Will you be my monkey"? If I'm going to have to go through hell, at least don't make me go through it alone. Come on, somebody. It said, "Paul and Silas". That little and is the Devil's problem. If he would have wanted to kept you bound, he shouldn't have let you get to church today. If he can keep you in the cage by yourself, he can torment you in fear.

I have a connection today. Come on. Shove somebody. Say, "Make the connection". If you would have stayed home, you might have given up, but you came to church around some praising people, some praying people, some worshipping people, some people who know how to rejoice. He put them in the cell. Big mistake. Paul is kind of grumpy, so if you put him by himself, he might start to get a little negative. "It's midnight. I was trying to serve God. I can't even get comfortable because they beat me on my right side, and they beat me on my left side. I can't even turn all the way around because my feet are in these stocks. All of a sudden, I hear Silas. Silas starts singing, talking about, 'My hope is built on nothing less than Jesus' blood and righteousness'". Paul says, "Shut up, Silas. Get some sleep. I don't know how long we're going to be here". Silas kept singing. He said, "I dare not trust the sweetest frame but…" He did that little run. Paul sat up, and Paul said, "…wholly lean on Jesus' name".

It was midnight, so then Silas said, "'When darkness seems to hide his face, I rest on his unchanging grace.' You take it, Paul". Paul said, "'In every high and stormy gale, my anchor holds…' My head hurts, but my anchor holds. My back is raw from where they beat me with rods, but my anchor holds. I went through some stuff this week, and I have some storms in my life, but my anchor holds within the veil'". Then they sang a duet. They said, "On Christ the solid rock I stand. All other ground is sinking sand. All other ground is sinking sand". Then Silas said, "Do you remember this one? 'What can wash away my sin?'" Paul said, "Yeah, I know. 'Nothing but the blood of Jesus.'"

See, here's the principle. You have to use what is loose to shake the shackles off of what is bound. This is going to set somebody free. You only focus on where you're bound, so you stay that way. Your perspective is either your prison or your passport. Paul said, "I might be in chains, but I'm not chained because the Word of God…" The ground started to shake. God set their feet free by shaking the foundation their feet were connected to. Have you had some shaking going on in your life recently? Have you had some things you were standing on start to shake beneath you? When the earthquake comes, it can kind of feel like there is no stability in your life, but I came to announce that the reason God is shaking the ground is to break your chains. He's going to shake the foundation to break what you're bound to. He started to shake the foundation, and it says that when the foundation began to give way, everyone's changes were loosed. It was a chain reaction.

Are you going to let your chains break your praise? Some people do. Some of you felt today like you couldn't even sing along with the worship team because you're bound in an area of your life. You don't even feel like you can lift your voice or lift your hands. You don't even feel worthy to do it. You let your chains break your praise. There is a praise that will break your chains. I make the decision every day of my life through my perspective whether I'm going to let chains break my praise or whether I'm going to command my praise to break my chains.

Imagine the other approach. Silas turns to Paul and says, "Man, this sucks". Paul turns to Silas and says, "Yeah it does". Silas said, "I thought God was going to take care of us. I thought he was our protector". Paul said, "Yeah, me too. You know, maybe he's not worth serving after all". Silas says, "Yeah, so when we get out here, let's tone it down a little bit". Paul says, "You know, that wouldn't be such a bad idea. I'm a smart man, and I know I can do better than spending the night in this jail cell". See, the decisions you're making are a result of the conversations you're having. The conversations are the result of the connections you have made, and the connections you've made have formed the perspective you've had, and that's why some people stay stuck. Perspective is a connection, and the reason Silas sang, and the reason Paul prayed, and the reason they were free before their chains ever fell off…

Do you hear me? They were free before they were freed. The reason they were able to praise when they couldn't move and able to hope when they couldn't see is because their perspective was not connected to their pain; their perspective was connected to their purpose. Your perspective is a product of your connections. The gospel had never been to Europe before. Up until this point, the gospel had been held captive in the Middle East. God was setting the message free. To set the message free, he had to let Paul and Silas get locked up. When you look at it out of context, it looks like Paul and Silas had been forgotten about. They didn't see it that way. They saw a higher purpose, so they had a greater perspective because they kept it in context of their calling. While the foundations were shaking in the prison, the foundation of faith was being laid on the continent of Europe.

When foundations are being shaken in our lives, God is laying a foundation of greater faith. For everybody who is experiencing the shackles or the shaking today, I wanted to remind you of your purpose. The purpose of the Lord stands firm. The purpose of the Lord is forever. His ways are above our ways, and his thoughts are above our thoughts. If you can sing through the shaking and stand through the shaking, you will see the goodness of the Lord in the land of the living. Touch somebody and say, "I'm free". I'm free. I'm free to see things like God sees things.

The author of Hebrews said that everything that can be shaken must be shaken so that what can't be shaken will remain. Something is shaking in your life today. God is breaking connections to things. God is breaking connections to foundations that you've stood on that are unstable. That's what the shaking is about. He's setting you free. Jesus said, "I came to open the eyes of the blind. I came to declare liberty to the bound. I came to release the oppressed, and I'm going to loose your shackles by shaking your foundation". I know you want him to come up and loose you with a key, but he said, "I'm not going to do it with a key. I'm going to loose your feet with the shaking of your foundation".