Steven Furtick - Your Appointment In The Storm 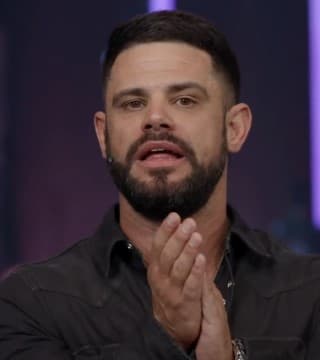 Some of the stuff you're going through right now is getting you to the places you asked God to take you, but you just don't like how you're getting there. We could preach a series on this. How many want me to preach a whole series on the appointment in the storm? Did you know that you have an appointment in the storm? Paul knew something in the storm the other people didn't know. What did he know? How could you stand up and tell people after they've been through 14 days of the tempest and the billows and the lightning and the thunder and the breakers…? How can you tell them when the winds are blowing, knocking you sideways, and Peter's wig comes flying off in the storm…?

How are you going to tell me in the storm to stay with the ship when you already told me it was going to break apart? How could God call you to stay with something that is breaking? Yet it is staying with the breaking that produces the blessing. It's breaking. Not my boat; my heart. My heart is breaking. Did you know the place God promises to dwell, not visit, is the broken and contrite heart? What does that mean? That means that when my heart is breaking it is important that I abide in God's love so I can experience his presence in a greater measure. It may not be your boat that is broken today; it may be your heart. It may be your business. It may be the number in your bank account that is screaming, "You are broke".

All right. "I am broke". God is not. This is how I want to preach to get people through a storm. Isn't that what we've been saying, that we're in the same storm but we're not in the same boat? You will remember that it is not what you go through that determines where you end up. Many people went through betrayal worse than you went through, and they're not bitter, and you are. Many people were disappointed more than you were disappointed, yet they still have strong faith, and you don't. Many people are struggling with their daily needs more than you are, and they're less worried than you are about it. It is not what I go through that determines where I end up. It's not. It's who I listen to.

Paul said, "You should have taken my advice. I told you. I told you to stay in the harbor". They set out to go to Rome. They got caught up in a storm. They lost their course. This is what happens. Right? You get blown off course. "Oh no. This was not on our GPS". Back in the day, we had TripTik from AAA. "They didn't put this on my TripTik. This wasn't on my itinerary". You get blown off course. Then you start freaking out, and now you're like, "Oh my god! I was going to retire in 12 years, but now I see the situation". When you get blown off course, you have to decide at that point, "Who will I listen to, and what will I guide by"?

These are the questions you must answer in this crisis of your life. This is the heart of what God is asking today. Who will you listen to, and what will you guide by? Paul said, "This is not a good time to sail", and they sailed anyway. Paul said, "We ought to stay here in this harbor for a little while". The reason they didn't want to stay in the harbor when Paul told them to stay was because, it says, it was undesirable to winter there. So rather than stay in a place they didn't like, they sailed into something that would destroy them. See, it's not the first storm you have to worry about. The first storm is a storm you can't control. It started raining Friday here in Charlotte. It looked like God got sick of everybody. I was like, "Oh, the governor let off the stay-at-home order, and at the same time this storm comes out of nowhere". I'm like, "Lord, are you speaking? I'll stay inside. I'm sorry, Lord! I won't go out anywhere".

I didn't know what to do. Out of nowhere. Storms are like that. One text message can change the next three years of your life in 80 characters…out of nowhere. That's the first storm, the one you can't control. You can't do anything about crossing the current in the stormy conditions. Some storms are just seasonal. Some storms can't be avoided. I mean, I can't control what happens in China. I can't even control what somebody does in Michigan. I can't control certain things, but God said to tell you, "Don't create a second storm by your decisions".

See, you can ask God to protect you in the first storm. "God, I don't know what to do. You do. God, I can't do anything about this. You can". But what a lot of us have been doing in this season of uncertainty… We have been creating second storms that are worse than the first. Let me break this down all the way like I'm cutting up some filet mignon where a 2-year-old can eat it. This is a good word for anybody who… You've been dealing with depression, but you've been drinking to get through it.

Now, depression is something that happens to a lot of us. I don't know anybody who hasn't had a season of darkness in their life. But if I try to drive out darkness with darkness and I depend on something in the darkness that is going to make me addicted to something even when the light comes up, the second storm is worse than the first. I have to be really careful. If my kids do something that makes me mad… I said I wouldn't preach a parenting sermon, but here's a little technique I've learned. Don't let your response be a bad example for the behavior you're trying to correct. "Stop screaming"! I think this is contradictory. I think my kids are confused right now. A lot of us are dealing with loneliness right now in this season. That's a storm you can't always control. But if you run to places in the storm that are more dangerous than the storm itself…

How many times have you left a place you didn't like? Some of y'all left a church you didn't like. The problem is you can't change if you never stay. Staying power. Paul was a church planter. Anything you plant is only as good as the roots. Starting power without staying power. "Oh man. I'm excited about this quarantine. I'm going to have time to spend with the Lord now". You and the Lord got lonely. I don't know who this is for, but I'm going to say it because I feel like it's by the Spirit of God. Don't run to a relationship that is a compromise of your character to solve loneliness. The second storm might be worse than the first. Don't run to something because you're lonely that is ultimately going to put you in a condition where you end up like the sailors in verse 20. "We have no hope".

See, what they were guiding by went away. I don't know if you saw this in verse 20. I think this is where it gets tricky to steer. As long as you have a reference point to know what's normal or what's good or how much time… These things really help in life. In verse 20, I thought it was relevant to our situation. He said, "When neither sun nor stars appeared for many days and the storm continued raging…" The storm could rage and they could keep believing, but when the stars disappeared they lost hope. When what you were guiding by goes away and every day just looks the same and feels the same… Now I get to feeling like this is endless. Now I get to feeling like maybe these chains are never going to break, this storm is never going to cease. They lost hope. We know they lost hope because Luke says they lost hope. The only way Luke could know they lost hope is they must have been saying, "There's no hope".

I mean, come on. It's not like hope is something you can see on someone's forehead. "How's your hope"? There's no meter for that. It's not a video game. You don't have a little power bar. They must have been saying, "It's hopeless". They must have been saying that. Paul stands up, and he decides that what you go through doesn't determine where you end up. Who you listen to determines where you end up. I think right now you are walking through a valley between two voices. One is wisdom; one is worry. One is gratitude; one is grumbling. One is blame; one is faith. "Now, wait, Pastor Steve. Wait, Pastor Stephen. Wait a minute. The opposite of faith is doubt". No, no, no. Doubt doesn't keep you from having faith. Doubt gives you something to have faith for, but blame will block faith every time. Blame will always block faith.

Watch Paul shift. He's like, "Y'all should have listened to me! But if I blame you, I can't trust God. If I blame you, it is going to block me from receiving what I need from God in this moment. So, you should have listened to me. We could have avoided this". How many know and will be honest to say, "There are some storms I went through in my life that I could have avoided"? Come on. Point your fingers up to the air like this. "It could have been avoided". I mean, some of the things in my life I blamed on the Devil were really a decision. They both start with the letter D, but some storms can be avoided. Ask Jonah. Ask Jonah if some storms can be avoided. The only reason Jonah went through a storm is he had an appointment.

Greater things. Bigger storms. Better stories. I've got an angel. I've got an appointment. So Paul is like, "Oh, I can't die". Did you ever watch a TV show and you knew…? I remember when we started watching that zombie show back before that looked just like the news. The Walking Dead. The trailer used to come on. (Don't send me a thing about the Word of God and The Walking Dead. It's in the Bible, the walking dead. Third day, Jesus Christ, Lazarus…it's all in there. Same stuff.) I saw the trailer, and I saw that the same guy who was in the first episode was still in it (because we watched it later) in the current season, so it took some of the suspense out of the first season, the second season, the third season, the fourth season, the fifth season.

Now, when you have a word from God concerning your life… And it could be simple. He said he would never leave me nor forsake me. So if he's going to stay with me, then whatever happens in this storm… I already saw season 6. They can't kill Rick. It doesn't matter how many Walkers. They can't kill him. I saw the season finale! I've got staying power! I've got the Holy Ghost! I wish we could high-five our neighbors, but tell somebody, "I'm in the season finale". Staying power. That's what we're celebrating today: not that we avoided the storm but that we stayed in the storm.